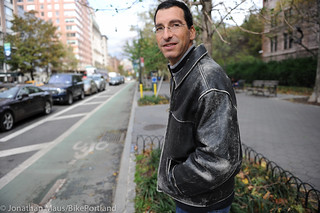 Mark Gorton, the founder of OpenPlans and the influential advocacy media empire Streetsblog, will deliver the keynote speech at the Oregon Active Transportation Summit next month.

The Summit takes place in Salem on April 24-25th and the agenda feature a host of speakers, breakout sessions, and a lobbying day at the state capitol.

Gorton (Wikipedia) is an engaging figure in the livable streets movement. An entrepreneur known for his creation of Limewire, a peer-to-peer file-sharing platform, he has devoted considerable resources to transportation and urban design issues for many years. He has been a major supporter of New York City-based non-profit Transportation Alternatives and his New York City Streets Renaissance initiative led to the creation of Streetsblog and Streetfilms. In 2009, the Utne Reader named him “One of 50 visionaries changing your world.”

At the Pro Walk/Pro Bike Conference in Long Beach, California last year, Gorton got a standing ovation from the assembled crowd of advocates and bureaucrats. Gorton’s latest project, Rethinking the Automobile, is aimed at raising awareness of, “the negative impact of the automobile on our world.”

“Through public events and media campaigns,” states the project’s website, “Rethinking the Automobile reveals how policies that prioritize the automobile destroy public space in our cities and towns and have created a dangerous and unsustainable world.”

I interviewed Gorton back in November while in New York City. To put it mildly, he has strong opinions about the continued dominance of auto-centric city planning and policies. “The fact is, people are dying, people’s lives are being shortened,” he said, “Why aren’t people impatient? Why aren’t they holding people accountable? Now it’s time for planners and officials to start owning the health and safety of citizens. It’s about not letting these people get away with it anymore.”

That sentiment should make for interesting conversations among transportation advocates the Summit and in the offices of Oregon state legislators who just pushed through a massive freeway expansion project (the Columbia River Crossing) that was expressly designed to make automobile use more appealing.

You can register online for the Oregon Active Transportation Summit. See you there!

The future of transport is human powered.
Mark Gorton for Transportation Secretary! I’d pay money to see him go into the ring with that fellow Matt Garrett.

If I might draw your attention to Gorton’s ~70 slide presentation – wow.
http://rethinktheauto.org/national-presentation/
Lots of work and thought went into that. I liked it very very much.

Thank you for the link. That was excellent!

Great. Another city slicker telling me how to live. Let’s widen the schisms in Oregon and pretend that we can predict that cars will never get better. He’ll preach to the choir and the City will continue to waste money on street cars.

“… cars will never get better”

Gorton isn’t talking about cars. He’s talking about the mindset and institutions that have given over our lives and our geographies to a car-based system that precludes all other ways of being. Did you look at his slide show?
I’d be curious to hear your specific reactions to, your criticisms of the findings he enumerates.

This shows much of what Mark believes in: http://www.streetfilms.org/rethinking-the-automobile-with-mark-gorton/