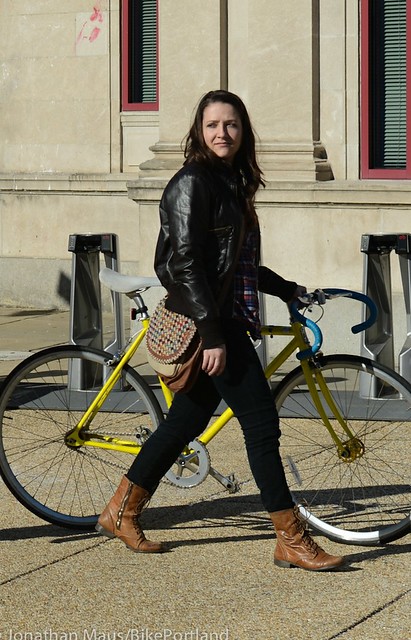 This stylish young woman on a fixed-gear was spotted in the Adams Morgan neighborhood.
(Photos © J. Maus/BikePortland)

In thinking about the quality of a city’s bike network, I think who is riding is often just as important as the type of infrastructure they’re riding on. With that in mind, I spent several hours walking and riding around Washington DC with my camera during my visit there last week. I was on the lookout for two things: bike-specific infrastructure, and people riding bikes. Taken together, observing these two things tell me a lot about a city’s bike-friendliness.

Today I’ll share a sampling of what I saw.

When looking at people on bikes, I tend to notice many things; the type of bike they’re on (drop bars or upright?), the clothes they’re wearing (spandex or suits?), their speed, their compliance with traffic laws, their age and ethnicity, their general demeanor (do they look calm or stressed?), and more.

What do you notice? And what, if anything, do you think it tells us about where DC is on the bike-friendly spectrum? 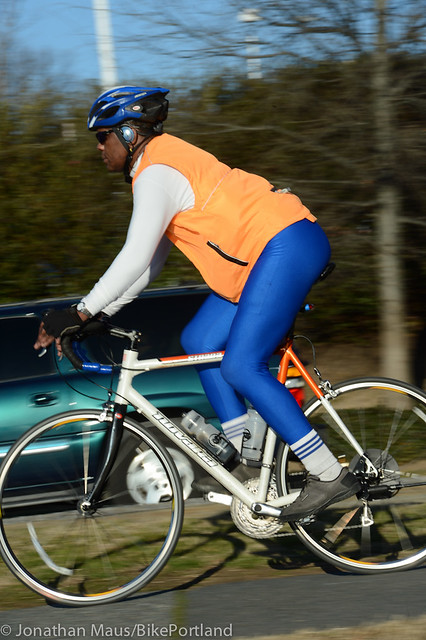 On the Rock Creek Trail. 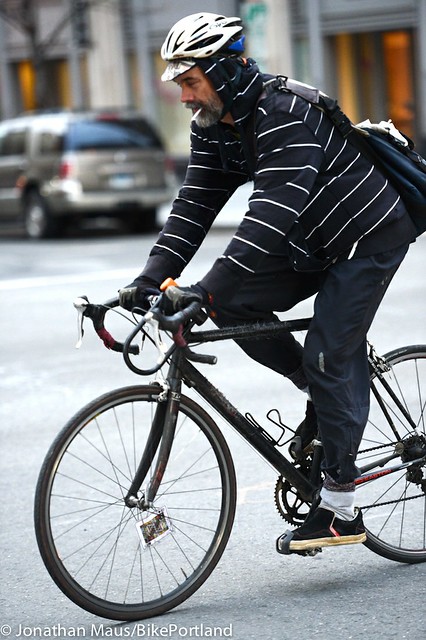 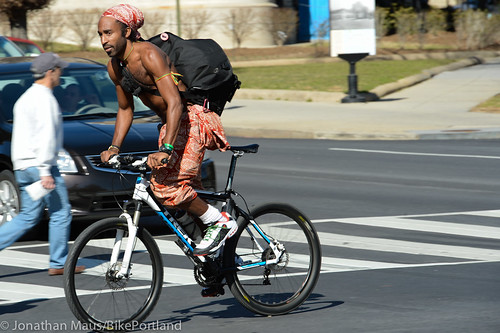 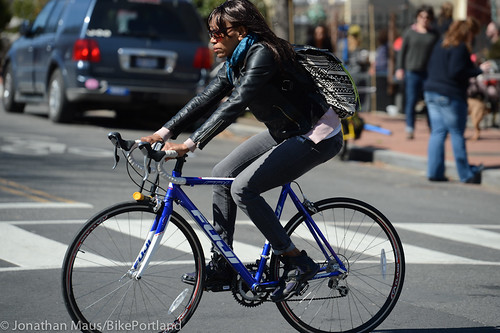 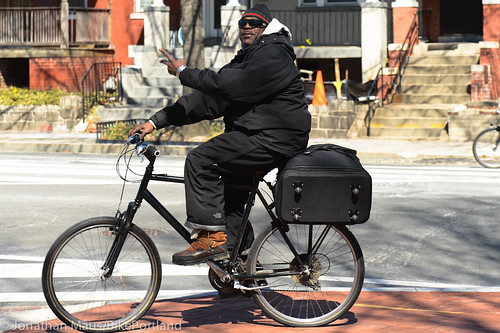 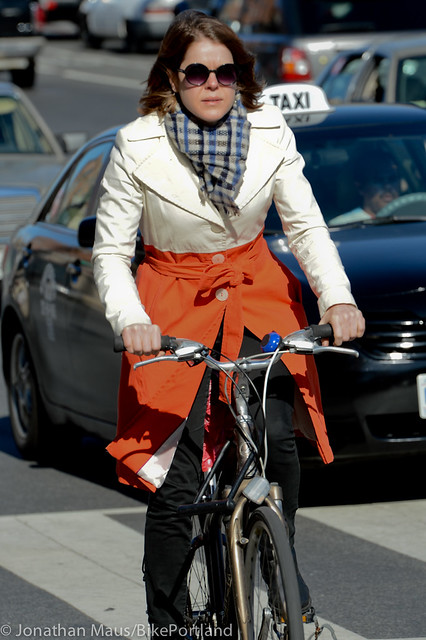 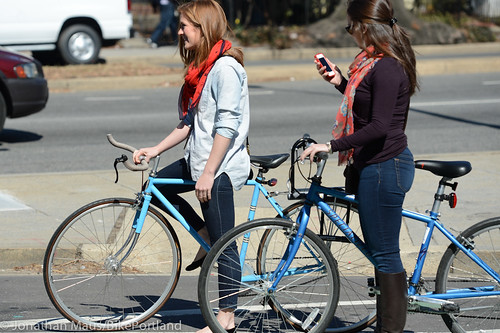 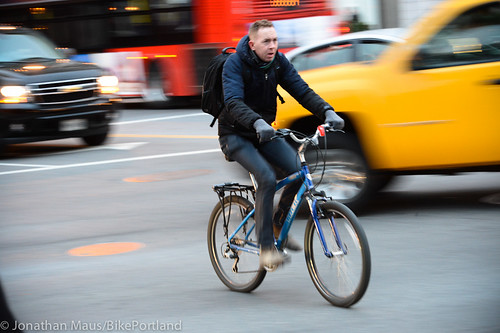 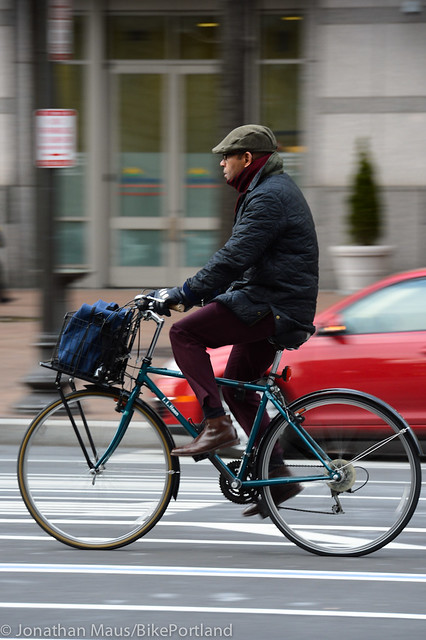 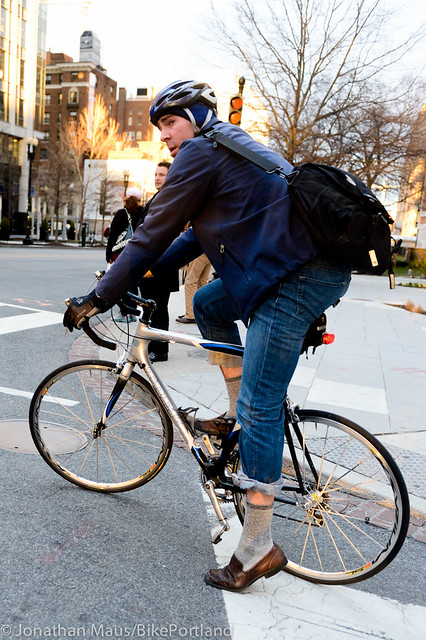 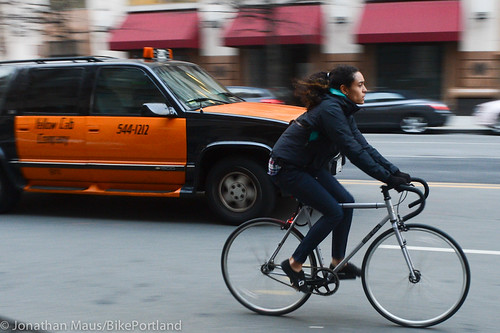 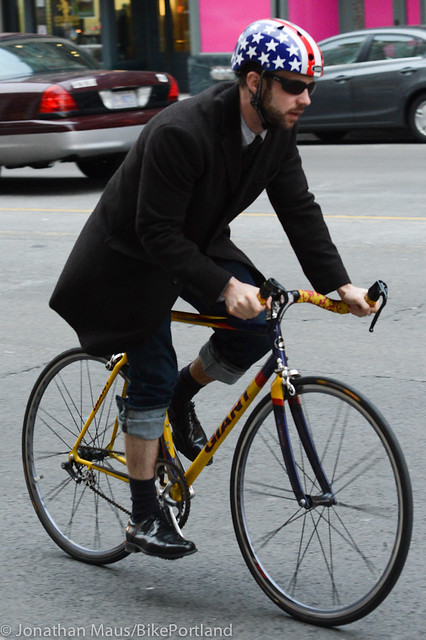 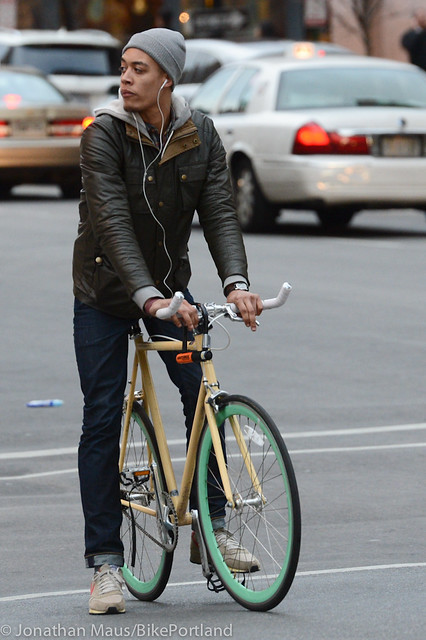 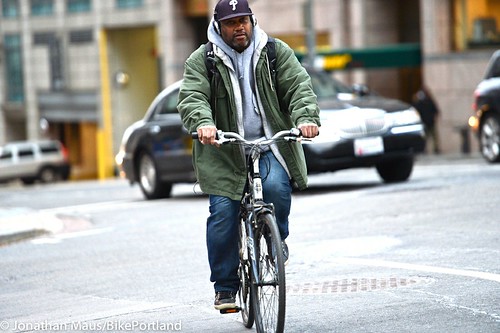 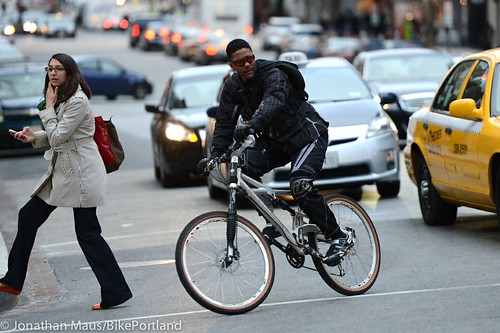 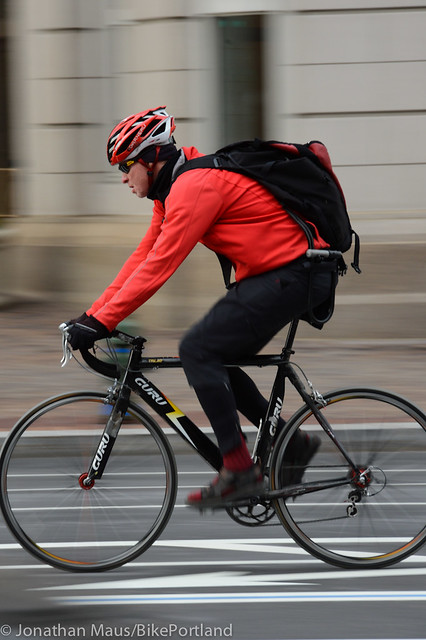 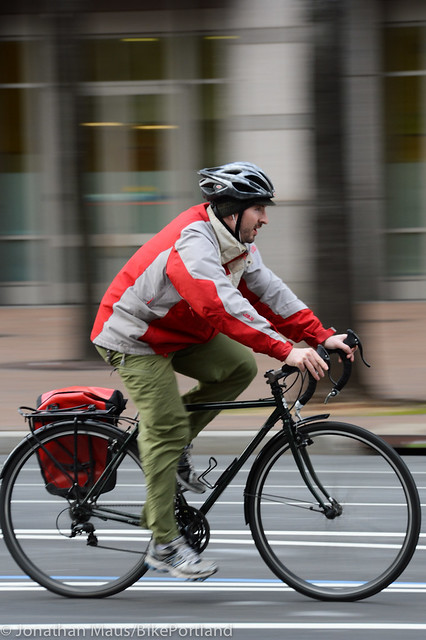 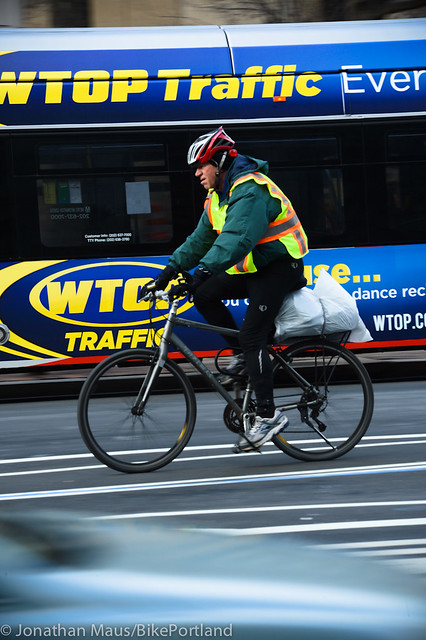 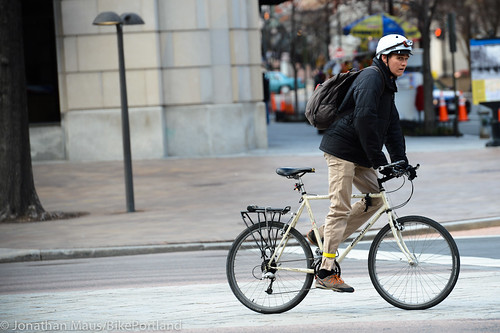 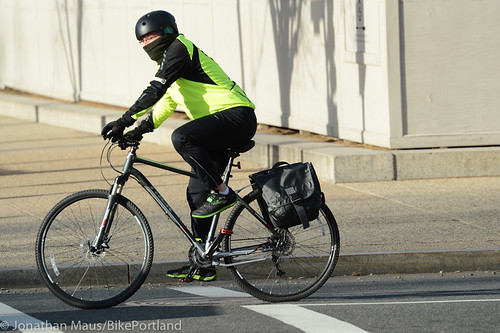 Madison Drive NW on the Mall. 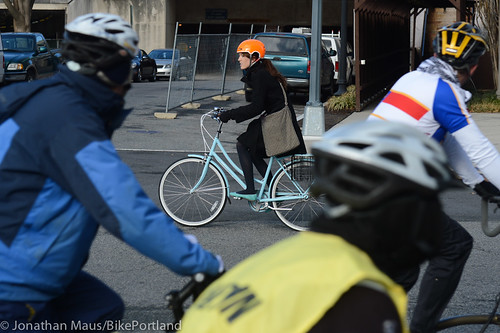 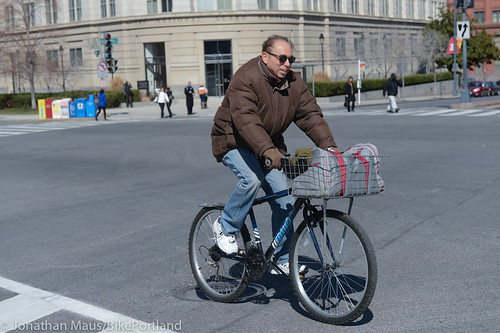 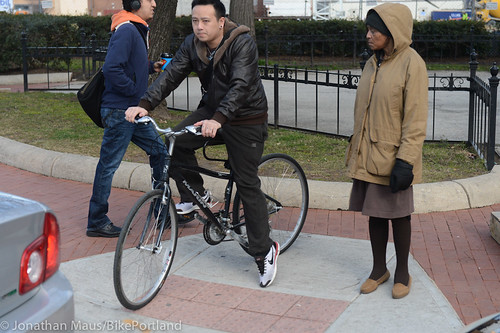 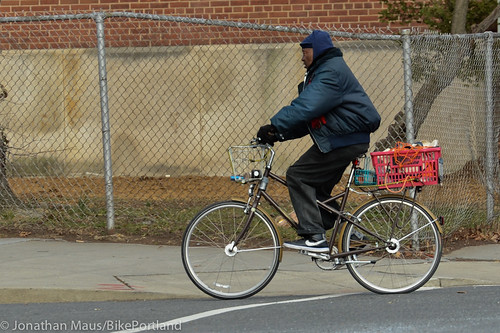 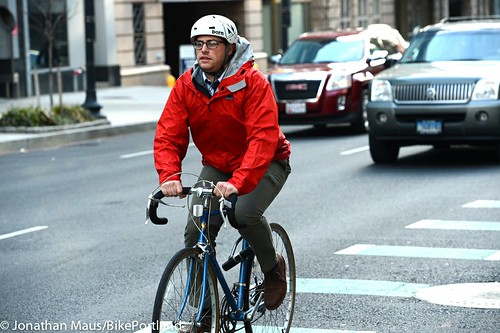 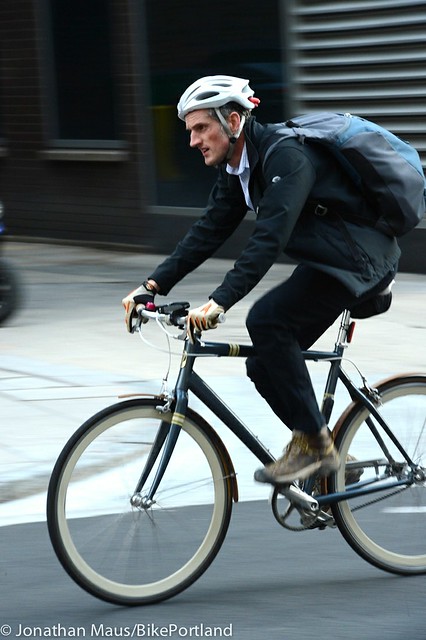 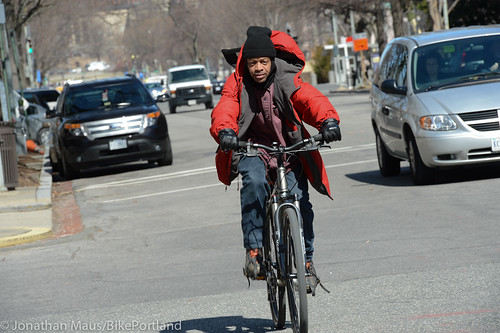 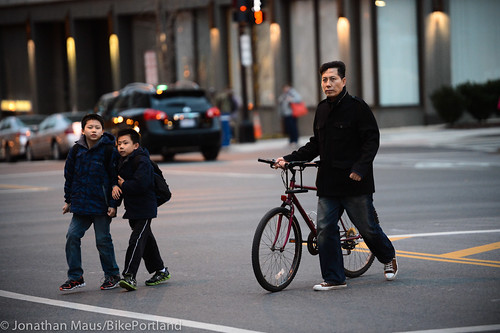 What I observed backs up my larger assessment of Washington DC’s bikeway network. I’ll share more thoughts on that tomorrow, along with photos of DC’s bike-specific infrastructure.

— BikePortland’s DC coverage was made possible by Planet Bike and Pro Photo Supply.

Could it be that dropbars are vestigial, like tailbones, or running boards?

well…some of us do race while we commute!

I use my dropbars on every commute. I guess if you have a shorter ride they aren’t necessary, but not all of us live within 5 miles of our job.

Some of us ride drop bars because we need a bike that does everything. Commuting, grocery getter, and 50-mile fun rides on the weekend.

And some more of us don’t give a splat what other people are riding, as long as they’re safe and happy…

Whoa. My question about dropbars was meant as a hypothesis not a judgment.
I also don’t think riding 50 miles or 1000 miles necessarily calls for drop bars. I’ve ridden tens of thousands of miles and haven’t used drop bars since I was about 13.

I love the flexibility of positions that drop bars offer, I’ll never switch away from them.

I’ve always wondered why everyone is so fond of drops as well. I constantly have bruises on my thigh from my bike with drops. There are so many other options if you need a bike that “does everything.” Moustache, butterfly, etc. That gives you so many other positions. For touring, hauling cargo, trailers, etc. In these photos, everyone is on the flats, and only a couple people are on the ramps. No one is actually in the drops. My touring bike I run the classic ‘Scott AT-3’ bars which I love with a passion. Drops have their place, though. My road/racing bikes have them. My cross bike has flats. They stopping reflex is just much slower is you are riding with your hands on the flats and have to move to the ramps to brake like the majority of the people are displaying. That time in an emergency situation can cause you to go into an intersection, through a windshield, to hit another cyclist, pedestrian, etc. Not trying to start an argument. Different strokes for different folks. Just food for thought.

For urban riding in traffic i spend most of the time on the brake hoods (quick-draw stopping ability) – for longer climbs, or cruising slowly when there are no sharks in the water I’m on the bar top (or the bends) a lot. — & for fast descents i’m down on the drops. The multiplicity of hand positions (4 distinct, at least) is a great sales point for drop bars, and if you get them high enough even someone with a balky low back, like me, can find them very comfortable, with a relaxing & therapeutic pelvic tilt possible. Also, with hands on the hoods or the bends your hands are in an excellent neutral position (as opposed to palms facing down, like on straight bars) that is a great way to avoid carpel tunnel aggravation in the forearms.

So great to see the diversity of bikes and people riding in DC!

Is it odd that 90% of folks are bundled up for winter and then there’s 1 shirtless guy in a sarong?

No. 21 is a great shot. A young woman with a pastel bike and shoes to match has a trio of DC lads captivated. Perhaps her color contrasting helmet is crafted of kryptonite

a trio of DC lads and a fourth from Portland.

We don’t normally see black people on bikes in Portland posted on BikePortland.

Both pantlegs rolled up. 🙂

Why is #7 labeled the auto industry’s worst nightmare?

Here are my top 3 answers.
1. It’s not raining.
2. Their commute takes less time than changing clothes.
3. They haven’t yet abandoned the notion that what other people think about their riding attire is less important than their comfort.

1. if god had wanted us to ride carbon fibre in the rain she would not have invented trainers.
2. interval training.
3. riding a carbon fibre bike without the compressive properties of elastic fabrics is a major risk factor for atrophy of the quadriceps and gastrocnemius.

Denim appears to be the cycling attire of choice.

Not timid, it’s just the sun (even with the glasses) in her eyes.

What about the white knuckles? (Can’t say I blame her with a DC cabbie on her six.)

Is it just me or does it look like #2’s bike is growing hair on the top and down tubes? Perhaps he sprayed some glue there and while wearing shorts his bike is providing a free waxing service.

Looks like the result of a crappy spray paint job intended to cover the logos? Theft deterrent or stolen bike?

I love all the diversity with race,gender and clothing!

not one DC rental bike?

The dream of the hipster is alive in DC.

#9 is on that “coolest” list just for his shoes alone.

wow this is RAD! thanks for sharing these awesome ppl riding bikes 🙂

Out with the earbuds, por favor!