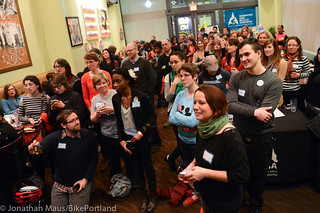 On Sunday night at a restaurant in Washington D.C., a powerful and tangible expression of the new era in bicycle advocacy was on full display. Upstairs at Busboys and Poets on 5th and K, the of League of American Bicyclists’ Equity Advisory Council shared a large dinner table, while downstairs, the Washington Area Bicyclists Association (WABA) kicked off their new Women & Bicycles program.

It was ground zero for the burgeoning new effort to “change the face of bicycling.”

For several years now, bicycling’s gender gap and the lack of racial and socio-economic diversity in America’s bike lanes have been simmering on the local level. Initiatives like the Cyclofemme ride and the Community Cycling Center’s Barriers to Bicycling project are just two examples of grassroots responses. Now the effort to tackle these issues has coalesced on the national level behind a surge of energy and enthusiasm.

WABA’s new program, launched with an outpouring of individual donations and $15,000 in seed money from the League, will offer the D.C. area a new approach to getting on a bike. The program will include, “events, workshops, rides, meet-ups and information that’s accessible and welcoming,” according WABA’s Nelle Pierson. 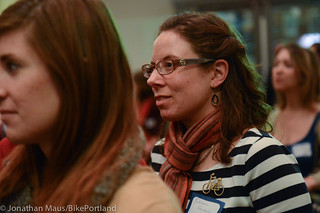 Women will play a larger role in
this new era.

WABA’s initiative will build on the efforts of Black Women Bike DC, a grassroots group founded with a Facebook page two years ago that has become a force to be reckoned with. Last night I met Anica Allen, a member of the Black Women Bike leadership team. She said one of the big services her group provides is simply answering questions that women wouldn’t feel comfortable asking anywhere else. Things like hair care (a big deal for black women who want to bike), finding a comfortable saddle (Anica suggests padded shorts and the use of cocoa butter to smooth out longer rides). “People ask questions,” she said, “and we answer them.”

Black Women Bike’s co-founder Veronica Davis was one of several speakers at the WABA event. She said, “We’re just trying to remove the barriers,” to making biking a feasible option for black women. Like all advocates, Davis loves bicycling and simply wants to share that feeling with others. The way she sees it, “The bike is about freedom, it’s about access, it’s about not waiting 20 minutes for a bus that isn’t coming.” 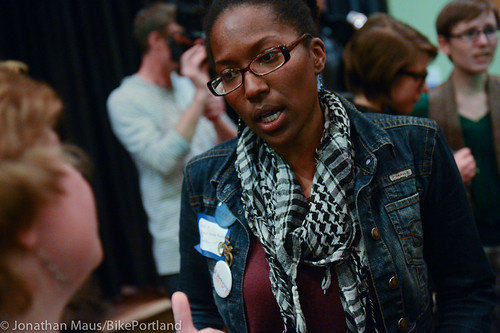 Carolyn Szczepanski, director of communications for the League of American Bicyclists, said the focus on women and reaching out to new demographics reflects, “A concerted, intentional approach to change the face of bicycling.”

“There’s like this tsunami of inclusivity happening at all levels of bike advocacy.”
— Elly Blue

Those are big words from an organization that puts on an event that author and publisher Elly Blue said some have called a “sausage-fest,” as in, the attendance has been predominantly male. Blue spoke at last night’s event and she was also there to sign her book Everyday Bicycling and sell her growing list of titles. While Blue chided the National Bike Summit for its gaping gender gap, she also said, “That is changing really fast.” “There’s like this tsunami of inclusivity happening at all levels of bike advocacy,” she added.

According to Blue, the increased focus to women’s issues in the bike movement mirrors the attention women’s rights are getting in the news these days. “What is a better tangible thing you can do, short of calling your Congressperson or donating to Planned Parenthood, to control your own body and where you go and your health and how you feel and what you do and who you do it with than riding a bicycle?”

Blue’s sentiments are likely similar to those expressed by women a century ago who flocked to bicycling as an act of liberation from the confines of a stifling, male-dominated culture. But today, beyond the simple act of a bicycle ride, these women are activists with big plans.

“Any time you have new blood in a movement, any time you have people have not been part of it and now are part of it, those are the most powerful people,” Blue shared, “We are changing everything about the bicycle movement right now and about transportation and about health in the United States and about what it means to be a woman. That’s us. And it’s happening right now.”

BikePortland’s coverage from the National Bike Summit in Washington D.C. is made possible by Planet Bike. Major thanks also goes to Pro Photo Supply.

My jealousy of Mr. Maus’ life continues to trend upwards…

anyone can go to the bike summit