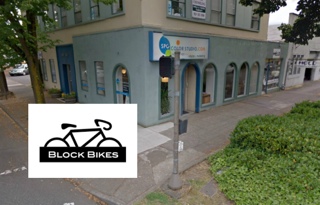 Downtown St. Johns has been without a bike shop for a few months since Weir’s Cyclery moved out of the neighborhood at at the end of last year (they’re now located on N Lombard at Portsmouth) That didn’t seem right to resident Ben Helgren, so he’s decided to take matters into his own hands. Ben plans to open a new bike shop, Block Bikes, on March 9th that he hopes will become the go-to place for bike riders in St. Johns. The new store will open up at the corner of N Burlington and Philadelphia (right off the St. Johns Bridge, map).

Ben, 35, has worked in non-profits for the past nine years (on programs promoting financial literacy and home-buying skills) but he has wanted a job in the bike industry for a while now. He became a certified bicycle mechanic through the United Bicycle Institute last fall and he and his wife planned to move to Billings, Montana where she planned to go to school and Ben planned to work at a bike shop. But plans changed, explained Ben during a phone call this morning.

“When we heard Weir’s moved and got a new owner, we realized our neighborhood doesn’t have a bike shop in it… So we just kind of ran with that.”

Ben says his wife now plans to attend school at Pacific University in Forest Grove while he maintains his existing non-profit job and gets Block Bikes up and running. The shop is set to open on Saturday March 9th and will have weekend hours only until May (which is when Ben will begin working in the shop full-time). 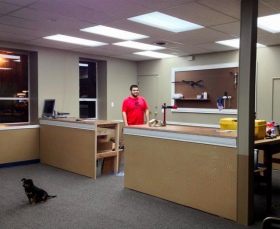 Helgren inside the shop.
(Photo: Block Bikes on Facebook)

Ben says the shop’s location at 7238 N Burlington Ave — right on the corner of N Ivanhoe and Philadelphia — is “an ideal space.” It’s just a block away from the St. Johns Bridge, which is a gateway to riding in the West Hills, Sauvie Island, and beyond; and it’s smack dab in the heart of downtown St. Johns. Ben said he feels it’s important for St. Johns to have its own bike shop so that people don’t have to travel far to get parts and service. And he thinks a bike shop will help keep the far north neighborhood, “Integrated with the rest of the city.”

The shop will start off with a small selection of basic, singlespeed road bikes and city cruisers, perfect for tooling around St. Johns streets. Ben hopes the shop is a place that appeals to everyone. “The biggest thing I want is for everybody who walks in to feel like it’s a welcoming place and like they won’t be judged for what type of bike they have.”

Welcome to the neighborhood! St. Johns is a wonderful place!!!

You do Mr Helgren a disservice by not mentioning his address until the 5th paragraph. Yet you give the location of Weir’s Cyclery in the first paragraph.

It’s Jonathan’s service to a greater community to promote literacy by getting you to read the whole dang article.

And how exactly did I get to the 5th paragraph to find the stores location?
Seeing as the article is about Block Bikes, one would assume that the focus of the first paragraph would be to give a general overview of the bike shop in question. The following paragraphs are used to provide more detailed information. Pretty basic writing, get the 5Ws in quick then flesh it out.

jonathan provides the cross streets and a link to a map in the first paragraph, but i’m sure he appreciates your critique….i’m also sure that ben appreciates the free advertising for his new endeavor, regardless of when the address gets mentioned.

hehehe:) I only had to glance at the picture and I knew instantly where it was ! Sweet, welcome to Saint Johnnys.

Wow. I hope this dude is incredibly appreciative of his very accommodating wife.

I think I’ll go there and buy something. Anything to help a new bike shop get going. The more, the merrier!

Congratulations, Ben! I’m so happy to hear that you’re staying in Portland. You’ve been a great help to the Community Cycling Center and we’re excited for you and wish you all the best!

Awesome. So happy to have a bike shop in St Johns again!

Yay!!! I was so sad when Weir’s moved away. I love those guys, but that’s a long way to schlep your bike if you have a flat.

Good news! I didn’t realize that Weirs moved yet again…what is this, location number four in ten years?

Also, not only does Weirs website look like something from the past, but it still lists the address at 8247 N Lombard, which would be their last “in St. Johns” location.

This is so positive. I look forward to meeting you all, and having a bike shop in St. John’s I want to frequent. I will be one of the ones getting off the shambling, bump-a-luck Trimet 16 with his bike and coming in to your store. Can’t wait, and thank you in advance.

Not sure if I’ve met Ben, but hey! welcome to SJ! You might want to hit the city up for a staple rack or two.. maybe the ones from the old Wiers?

question.. block bikes website talks of it being a ‘community bike shop’. Does that mean a variant of the CCC or NP Bikeworks?

Thanks everyone for the kind words. To answer your question ‘just joe’ I’m not going to establish Block Bikes PDX as a non-profit. I’ve been working in Portland non-profits for the 8 years, and am looking forward to the flexibility allowed by not being a non-profit. I really enjoy training, and I will be doing some maintenance classes, and also some financial classes on budgeting and credit repair (my non-profit experience). I do not have detailed plans yet on when and exactly what the classes will cover. I look forward to meeting everyone.

Everybody.. TAKE THE LANE on the SJ Bridge on your way to see Blocks Bike.

It’s been nice getting to know the folks at Revolver Bikes on Interstate, but it will be so nice to have access to a bike shop in St. Johns again! Welcome to St. Johns, Ben!

Hoping the shop also carries 16 and 20 inch bikes for our youngest St. Johns riders and super stoked that we will have a local shop!

Ben– Please re-consider name “Block Bikes” I get the idea but sounds more like a football block than neighborhood block. Further, the logo in the article is big black block with a bicycle stuck in it that only reinforces the idea of blocking out bikes. How about Cathedral Bikes? Anyway, it’s good to see another bike shop in St. Johns!

180mm_dan, guess what? If you wanted to set aside the time, gather funds, buy store equipment, find a retail space, order merchandise needed to start your own bike shop, you can call it whatever you want!

I, for one am glad to see a new bike shop in St. Johns. Great location!