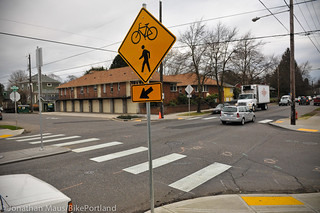 When it comes to making neighborhood streets nicer for bicycling, sometimes little things can make a huge difference. N. Michigan Avenue is a good example. The Portland Bureau of Transportation (PBOT) began to make Michigan an official part of their neighborhood greenway network just over one year ago. The improvements have come slowly and in phases; but recent changes have made a significant difference.

I ride Michigan twice a day from Rosa Parks Way to Fremont so I know it well. With just speed bumps and sharrows, I didn’t notice a huge difference in the bicycling environment. But with new crossing improvements and a host of stop sign changes, it’s starting to really shine and become the efficient and safe bikeway it needs to be.

First, let’s look at the new crossings. PBOT has added striped crosswalks, signage, curb extensions and median islands at several high-volume intersections. At Rosa Parks and Alberta, I noticed cross-traffic goes much slower and is more likely to stop to let me cross because of the new medians. They’ve also installed yellow warning signs to let people know they should expect human-powered cross-traffic ahead. 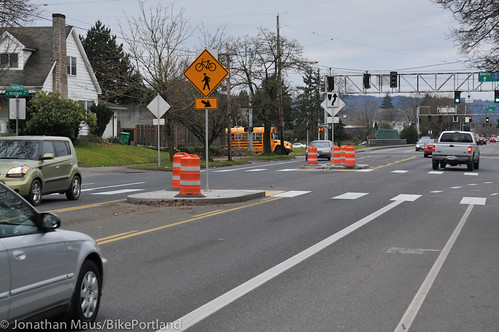 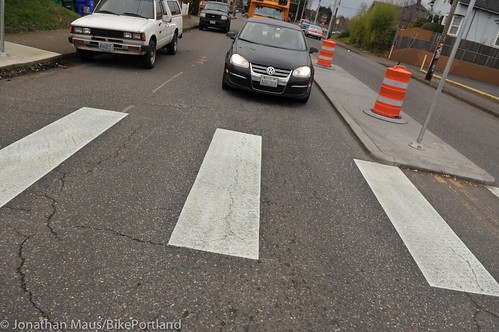 The combination of striped crosswalks and concrete medians leads to slower speeds and more people who stop to let you cross. 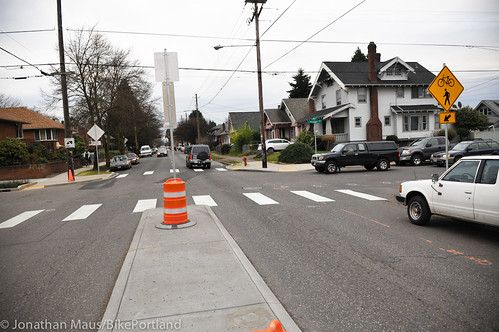 Crossings on Michigan have also been improved thanks to new curb extensions and ADA curb ramps. The curb extensions not only shorten the crossing distance for people on foot, they also narrow the roadway to encourage slower speeds. The rebuilt corners with new ADA ramps not only help folks with mobility devices (and pushing strollers), they also prevent people from parking cars all the way up to the curb. One of the most overlooked safety issues in Portland is when people park cars all the way to the corner. This severely limits the ability to see oncoming cross-traffic. I’ve noticed much more “daylighting” of corners and easier crossings thanks to the new ramps. 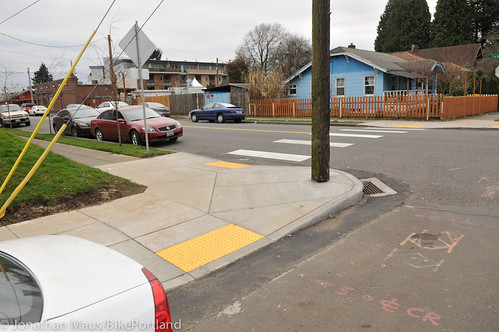 The other big change I noticed recently are the stop signs. One of the best things about PBOT’s Going St. neighborhood greenway is how you can ride without stopping for what feels like miles. The only stops are for larger/busier streets. Michigan had several annoying stop signs — including two on downhills, which are particularly cumbersome for people on bikes. I was pleasantly surprised a few weeks ago when I rolled down and the stop signs were gone!

At Prescott and Michigan, PBOT added a new stop sign (for south/eastbound traffic), but had the great wisdom to include an “Except Right Turn” sign below it. Yes, this is a little bit of Idaho Stop in north Portland… 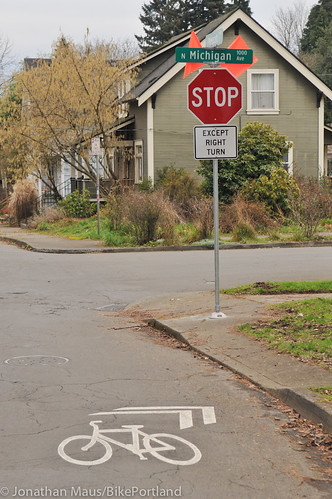 Not only are there fewer stops on Michigan, but PBOT has added stops to cross streets. In several instances, they’ve added stop signs to what were previously uncontrolled intersections. Now cross-traffic must stop, while it’s smooth sailing on Michigan. 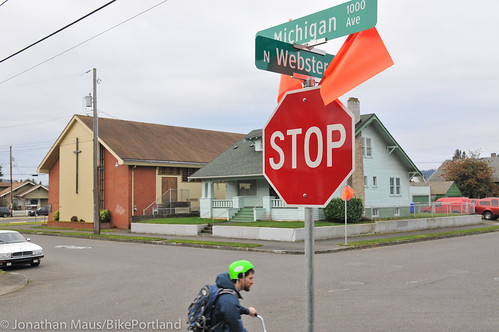 This used to be an uncontrolled intersection (without any stop signs).

Swanson added that the work happening on Michigan is using PBOT’s full “toolbox of street improvements.” He shared that once the project is done, they’ll have installed 27 speed bumps (21 are already in) and changed the stop sign configurations at 17 intersections between Fremont and Bryant.

Still to come on Michigan are more pavement markings, wayfinding signs, and “sign toppers” (similar to ones on SE Clinton and Going streets) to identify the corridor as a neighborhood greenway.

Michigan connects to PBOT’s growing network of neighborhood greenways and each improvement and connection makes the entire network stronger. This program has been funded with about $1 million per year that was set-aside by former Mayor Sam Adams. It remains to be seen whether that funding survives the current budget process.

Learn more about PBOT’s neighborhood greenway work on their website.

I don’t like the “Except right turn” sign if it means cars can make that turn without stopping. That’s a danger to pedestrians.

Also, I don’t think PBOT is using its “full toolbox” if they’re not putting in any diverters that prevent automobile traffic from taking advantage of the changed layout on Michigan for themselves. We need more of the treatments in place at SE 20th & Ankeny, or 39th & Lincoln, installed in these neighborhood greenways to prevent them from being car cut-throughs, or we’ll wind up with more streets like SE Salmon: so-called greenways that are filled with aggressive drivers bypassing the busier street running parallel to it.

They replaced no stop sign with a stop sign that allows right turns after slowing and yielding the right of way to anyone else who has it, this is definitely a safety improvement for pedestrians as well as everyone else. Not sure if you are familiar with the intersection but it is a pretty narrow street as well as a T intersection with slow speeds and good sightlines, no reason for cyclists to be required to stop here and unfortunately due to the failure of Idaho Stop legislation this is the only signage option available to the city.

Thanks for the info. I guess I agree with you that 1) it is an improvement, and 2) it could be even better.

My other point still stands, although I’m not familiar enough with Michigan to say whether or where a diverter would be appropriate in this case.

I do want at least two diverters on Salmon, though.

Salmon was a bikeway befor the 2030 plan. It’s on a list for retrofit to Neighborhood Greenway standards.

PBOT will monitor how traffic changes on N Michigan and, as will all Greenways, mitigate if the intended goals are not met. Michigan is part of the Going to the River project, federally funded, and had some tight deadlines to meet. Still to come is bike lanes on Skidmore between Concord and Michigan, but the connection of Blandena from Michigan to Vancouver is complete. Future additions include a connection for northbound travel on Vancouver from Going to Blandena.

I appreciate that ‘Except Right Turn’ is a new tool in the box, but it is unclear whether the stop sign disappears for right-hand turners, or should it be treated like an Idaho stop where one must still yield ROW??
It seems like a reasonable interpretation to think you have the ROW when making a right turn … and I would guess that’s probably not intended.

Right Turn Permitted Without Stopping is not in any way a new tool, it has been used in Oregon since the 1950’s. Research shows that they do not lead to an increase in accidents when used in applications where a single lane approaches an intersection like in this application. It really is not a safety issue.

Think of it as being exactly the same as a “slip lane” at a major intersection. A slip lane is the type where you have a protected turn made evident by a concrete island separate from the curb making it possible to turn right without stopping and not being controlled by the light … and and the same rules apply there – you must yield to cross traffic that has already asserted right of way, and by all means, you must still yield to pedestrians.

From Skidmore to Fremont stop signs were taken out up & down N. Michigan Av and were placed on the east/west running streets. Speed bumps were put in on N. Michigan. Working from home, I see car speeds in excess of 35 mph, never mind speed bumps! Prior to this, with stop signs at each corner, drivers couldn’t get up to such speeds.

I’ve found these changes to be somewhat mixed. The pedestrian refuge island on Alberta creates a lovely choke point necessitating one to take the lane, whether safe to do so or not even if you’re just going to turn onto Michigan. I’ve also found the the changes make turning from Michigan across traffic onto Alberta somewhat more difficult. Folks that I know from the neighborhood who walk this area also report it as a mixed bag: The island is nice for them but without it being signalized the crossing is still perilous on foot. The installation of stop signs on streets that cross Michigan are a nice addition. all in all I’d give it a B-. It is somewhat improved and better than average but could still use refinement.
Now how about some protected lanes eastbound on Willamette?

I ride Michigan to Alberta every day and agree this new median makes east/west travel much worse. Many drivers transitioning from “highway mind” here and parking is allowed on the shoulders. This creates a tight squeeze. If any good pork could come from misappropriated CRC funding may it be in the form of vastly improved bike access over Alberta.

The widending of the Going Street sidewalk to 10′, MUP minimum is almost complete. The landscape has received a huge upgrade as well.
And there is now a crossing flasher at N. Basin which really works nicely. Thanks PBOT! Once the Skidmore piece is done, you will be able to ride from NE Going & 72nd to the Shipyards on Swan Island with relative ease and safety.

This all sounds pretty encouraging. Thanks for the report.

I think gas taxes should pay for these kinds of changes. They are all designed to keep the car-menace at arms length.
http://www.andysinger.com/images/bookcover.gif

I also used to ride this daily a few years ago when I lived on Michigan and took classes at Cascade. It’s a great neighborhood for biking. Thanks PBOT!

In addition to the changes on Michigan, I’ve noticed a new stop signs going up at previously uncontrolled intersections in the surrounding area (Blandena St at Haight Ave, for example). While some of these are quiet neighborhood intersections, it’s nice to see the signs that clarify who has the right of way.