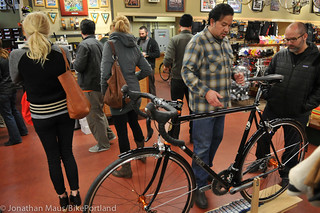 Last night River City Bicycles hosted a launch event for a new bike brand and toasted the ongoing success of an old one. Attendees were treated to fine wine, cheese, and nice nibbles from the in-house kitchen at Chris King Precision Components.

The focus of the event was for River City to announce they are the first bike dealer anywhere to represent Argonaut, a new custom carbon fiber bike brand developed by local builder Ben Farver. River City is also a dealer for Cielo, another fine local bicycle company that sprung from the hands of Mr. Chris King himself.

On hand last night was the man King has put in charge of overseeing the Cielo brand, Jay Sycip. Jay has helped grow the Cielo name slowly but (very) surely since it launched in 2008. Now Cielo boasts eight full time employees (including two that operate their in-house painting facility) and they’ve ramped up production high enough to offer buyers a 30-45 day turnaround (not too shabby for handmade bikes). Cielos aren’t fully custom (there are stock colors and sizes), but each bike is made to order. “Nothing gets painted until the order comes in,” Jay shared last night. 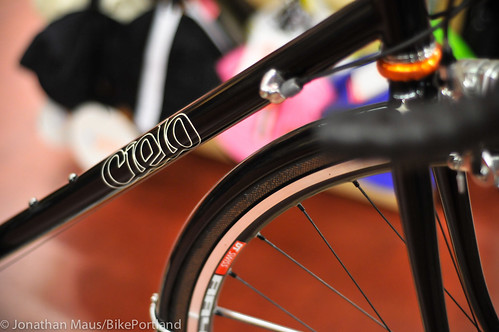 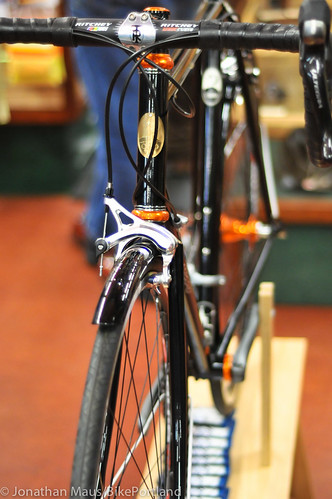 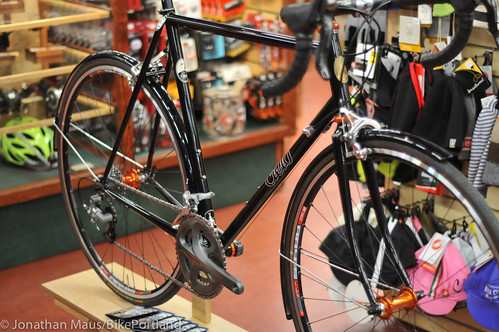 As for what’s new with Cielo these days, Jay says they plan to launch a new off-road touring/adventure bike at the North American Handmade Bike Show (NAHBS) in late February. Also in the hopper for Cielo is a collaboration with Tanner Goods, a Portland-based company known for high-quality leather goods. Jay worked with Tanner to create a leather saddle bag and handlebar bag that they plan to launch at NAHBS. He says they’ll offer a special Tanner Goods package on a batch of 25 Cielo Cross Classic and Sportif models. Look for a Cielo in the Tanner Goods retail shop in West Burnside (at 13th).

While Cielo seems to be maturing quite nicely, Argonaut is just getting started. Ben Farver is creating some serious buzz for his unique approach to custom carbon. Noted blogger John Watson (a.k.a. Prolly) did a better job than I can of explaining what makes Ben’s process special:

“This bike is however a by-product of domestic engineering and fabrication. The carbon weave is from the States. It’s cut to shape, moulded by a proprietary process, assembled and finished all within an hour drive from Portland. The process used produces very little waste. There’s no hodgepodge assemblage, no messy resin and it’s 100% custom. Basically, it’s a streamlined process that utilizes technologies that allow each frame to be engineered to a customer’s specific needs.” 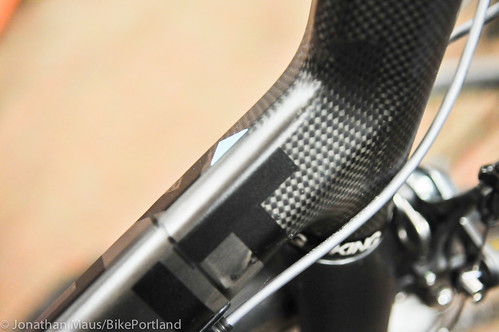 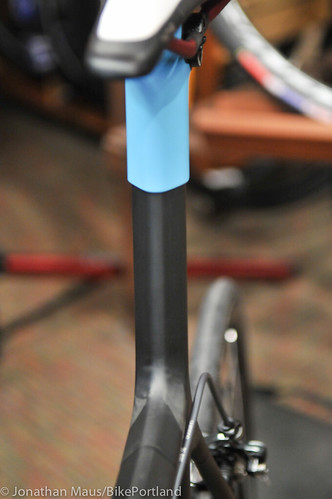 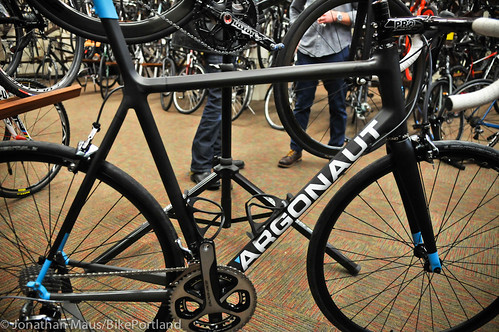 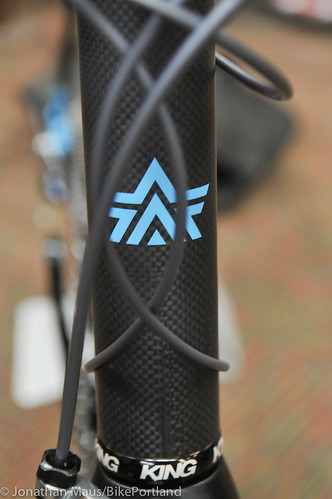 Ben gets his carbon fiber from Innovative Composite Engineering in White Salmon, Washington. It’s the same firm that supplies the material to industry stalwarts like Guru, Calfee, Independent Fabrication, and others. But unlike those companies, ICE sends Ben complete frame parts, not just tubing. “We make each frame part for each customer,” is how Ben put it last night. The experts at ICE work from Ben’s specifications to choose the composition and orientation of the fibers that create the various parts of a frame. By offering this level of customization, Ben can fine-tune the strength and resilience of each frame part. 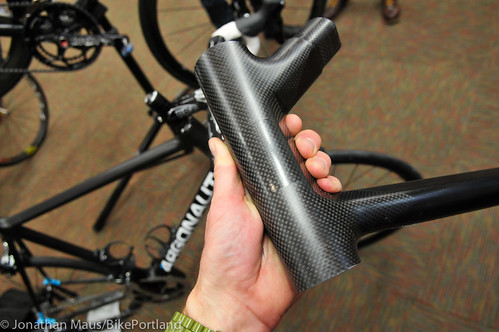 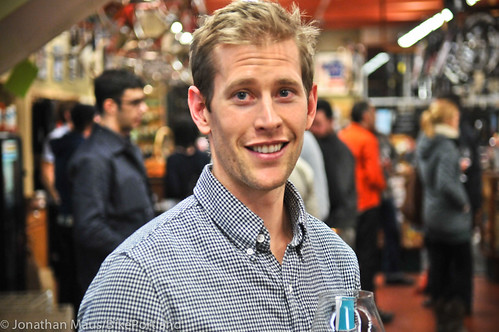 From the looks of his launch so far, Ben seems to have a bright future ahead of him. You can see an Argonaut on display and learn more about them at River City Bicycles (ask to chat with employee Matt Carre, an Argonaut owner and test rider).

Portland is home to many talented bike builders and their companies range from one person garage shops, to large-scale, contract frame production facilities. Learn more in our bike builder story archives.

Jay and Ben totally look like they were toasted!

Those bikes are sick! If I had extra cash I would blow it all on these

As I mentioned on Prolly’s blog, if there’s one place they know composites it’s the Gorge (windsurfers, kiteboards, UAVs). ICE aren’t the only experts in town but certainly the biggest. Tell Steve I said hi… 🙂