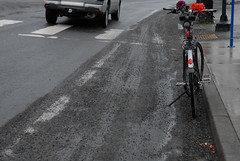 Mayor Charlie Hales has picked Toby Widmer to be his interim director of the Portland Bureau of Transportation (PBOT). Hales asked current PBOT Director Tom Miller to resign his position effective February 4th. In a statement today, Hales said Widmer will serve in the position for six months while a national search for a new director is completed.

Widmer, 61, is a former City staffer. He served as director of the Bureau of Maintenance (which is what PBOT used to be called) prior to retiring from service in 2002. Hales is touting the pick as another sign that he’s making street maintenance his main focus. Here’s more from Hales’ official statement:

“Toby came up through the ranks… He was driving trucks and laying asphalt. He understands that street maintenance is his first priority… Toby is exactly who we need in the interim. He’s a PBOT director who could start up every piece of equipment in the maintenance yard and run it.”

Widmer is no stranger to PBOT’s ongoing struggles to keep up with street maintenance needs. Back in 1996, The Oregonian reported a big drop in citizen satisfaction with street quality coupled with an increase in the maintenance backlog. At that time, Widmer told the paper, “The problem on street conditions is directly related to the city’s portion of dedicated gas tax revenue.” The 1996 article also said PBOT launched a goal in 1992 to cut the maintenance backlog, but ultimately Widmer was forced to drop the goal “because of the continuing drop in revenue.”

That should all sound very familiar to anyone who follows this issue closely. It’s the same line former Mayor Sam Adams and Tom Miller have been trying to push into the public narrative; but (thanks mainly to inaccurate media coverage) many people believe the maintenance backlog is due to too much focus on “bike projects” and poor management.

Given that past, Widmer should have a good feel for the challenges facing the bureau today. However, while some issues remain, much has changed at PBOT since Widmer was at the helm. Instead of tension that used to exist between maintenance and planning staff, some of which would commonly boil over into disrespect for maintaining bike lanes — has now subsided (at least to my knowledge). Thanks to years of Mayor Adams’ leadership and the increasing prominence of bicycling in PBOT’s plans, coupled with gratitude to maintenance workers from citizen activists and bike advocacy groups, the maintenance bureau is now seen as a willing partner in making our streets more bike-friendly.

Another big change since Widmer’s last stint at the City is that our roads these days serve a lot more than just people in cars. Given that new reality, I hope he can set a tone of balance between smooth streets and other important priorities.

“He’s a PBOT director who could start up every piece of equipment in the maintenance yard and run it.” No offense to Widmer, but is this a major requirement of someone picked to head up a major civic department? Personally I think having some education and training in management, public policy, and government is more important. But maybe that’s just me.

Chris I
Reply to  davemess

Isn’t that exactly what Hales accused Adams of doing with his Tom Miller pick?

Widmer is a caretaker of the position, not Hale’s ultimate pick. He sounds like someone who can take care of the system and attend to the basics until the permanent candidate fills the post – and can being to put their mark on the job.

Ugh…”and can be able to put their mark” is what I meant to say.

I’m seeing a dog lift his leg on a hydrant and somehow it seems to mesh with the concept of political bridge burning.

Hales: “The real issue is, once again, the need to get back to basic maintenance…Once we’ve sufficiently resurfaced all the streets with the money we have…Yes, move on to continue building out choices for people for how they move around the city… but job one is basic maintenance.”

I’m sure priority one is going to be repaving Going St, right?

nothing Hales says changes the fact that the price of asphalt has risen rapidly over the past twenty years and the real value of the gas tax raised has been flat or falling.
demand for asphalt has dropped a lot across the US – one wonders why?
http://www.eia.gov/dnav/pet/hist/LeafHandler.ashx?n=PET&s=MAPUPP51&f=M

I don’t know, but it didn’t stop somebody from letting a pile of it solidify in the street near me. Looks like fun to dig out now.

The last 10 years for most public transportation/ public works departments has been a monumental period of change, probably as great as the late 1940s for shifts in operating practices and planning. PBoT for one is a very different place, as is many major PW departments in US Cities.

I hope this guy knows what a sharrow is. Will someone get him a copy of “Bike Infrastructure for Dummies”?

The Mercury is reporting that Widmer is also a Hales campaign donor, to the tune of $1650. Isn’t that interesting?