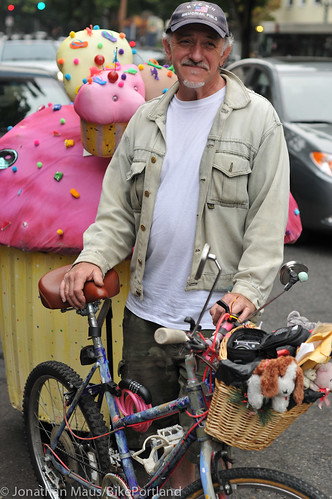 For the next few days, keep your eyes peeled on the streets of Portland for a huge pink cupcake being pulled behind a bicycle. The man doing the pedaling is 56-year old artist and New York City resident Jack Cesareo. After seeing mentions of a “cupcake bike” pop up in my various social networks in the past day or so, I happened up Jack on my way home from work last night (he was stopped in front of Dante’s on W. Burnside).

And yes, the rumors were true: He’s pulling around a giant cupcake. 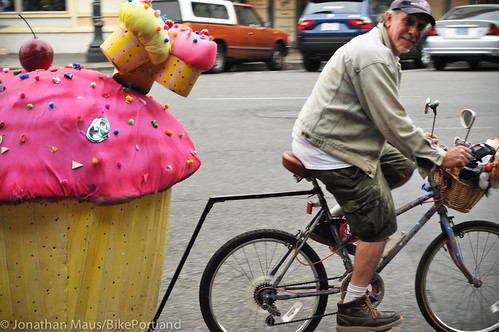 Turns out Jack is on his Cupcake & Bicycle tour around the U.S., and Portland is just one of many stops on his journey. (He doesn’t ride the whole way. For most of the miles, “Ms. Cupcake and the Three Twins” travel in the back of Jack’s van.)

When he’s not touring the country with his cupcake bike, Jack works as a prop builder, sculpture maker, and painter for the Natural History Museum in New York City. So how’d he end up pedaling around a giant cupcake?

“A friend’s band was playing down lower east side of Manhattan and a buddy of mine asked me to do something visual for a nearby cake shop. My girlfriend at the time like strawberry cupcakes so I came up with a cupcake.” 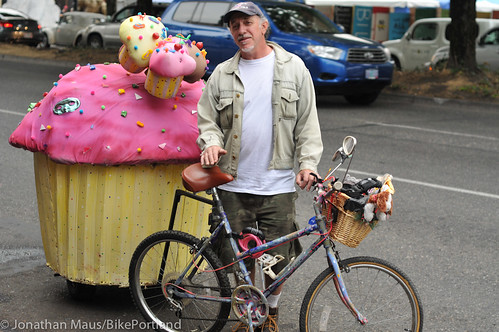 Jack designed it to be big because he used to put on a white spandex suit, get inside of it, and pop out in grand performance style.

Somewhere along the line, the cupcake left the shop window and ended up behind a bike. “That’s just how it evolved,” says Jack, “When I realized how much fun it was at the performance, it was like, next step, out on the streets!”

He’s been touring with it for about three years now and this is his second cross country trip. What keeps him going?

“It’s a love story,” he shared, “A heartbreak story. A lost love. The girlfriend I made the cupcake for… We broke up. We were engaged… All that stuff blah blah blah…” 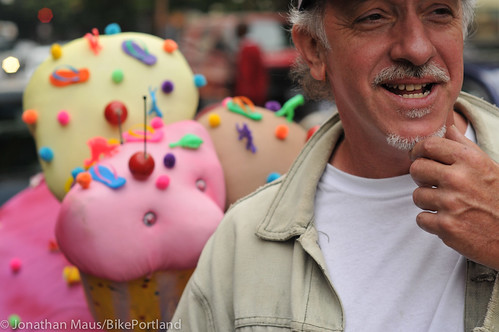 The cupcake bike seems like not only a way to deal with his heartbreak; but it’s also much more meaningful to him than the art and objects he creates for his day job. “Its so much fun to ride around. Being an artist and painting abstract paintings all the time… No one really give’s a flying-beep.”

Now, he loves seeing how people react to his creation. “It brings out a lot of smiles and a lot of curiosity. In a small way, it can turn what may be a shitty day, into maybe a better day.”

Jack will be in Portland for a few more days before heading back to New York. If you see him around, make sure to say hi.

Several of us watched in surprise as the cupcake followed Greg Raisman home yesterday evening. Thanks for the back story. I never would have guessed he wasn’t a local boy.

I saw this while traveling down SE Belmont last night. I gave it a second glance, then thought, typical Portland. I too just figured it was someone local. I did crack a small smile, it is a very random thing to have behind a bike.

put some music in there and bring it one of the Friday mystery rides!

love it!! I hope I see this guy around, I will definitely say hi to him.