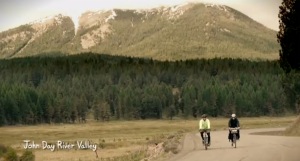 Travel Oregon has just released the first in a series of new videos in their ongoing effort to promote Oregon’s burgeoning network of officially designated State Scenic Bikeways. Last week we shared a bikeways marketing push that made its way onto a jumbotron in New York City’s Times Square.

To make the two-minute video (watch it below), the agency commissioned the Portland-based bike touring advocacy and journalism duo of Russ Roca and his partner Laura Crawford of Path Less Pedaled. Kristin Dahl, senior manager of destination development for Travel Oregon, said they plan to do a similar video for each of the nine officially designated scenic bikeway routes and they’ll be rolled out through spring of next year.

Russ and Laura have been all over the globe after they sold all their belongings to devote themselves to bicycle travel in 2009. To create this video on the Old West bikeway, Roca carried all his video and photo equipment — a tripod, 3 cameras, a video slider, an assortment of lenses and audio recording equipment — in his panniers for the entire 175-mile loop. “It was a dual challenge,” Roca says, “to not only simply ride the route with full camping gear but to have enough energy along the way to document it!

Russ and Laura recently completed a 5,000 mile bike tour through New Zealand; but they say eastern Oregon is right up there in what it offers bicycle tourists. “The riding is really simply some of the best we’ve ever experienced in our travels and we felt really lucky to get the opportunity to share it with others.”

— Learn more about the Old West Scenic Bikeway and get suggested itineraries at TravelOregon.com.

Very well done. It’s always nice to see a video that gives you warm fuzzy feelings and you can think to yourself, “yup, that’s a place I call home.”

Laid back delivery and not a single folding bike in view. 😉

Wow. I’ve never seen a video like this where it was so clear the people making it actually mean it. It’s chilling.

Very nice video! I’ve done 6 bike tours in Oregon, and continue to have a hard time convincing myself why I need to go elsewhere.

You need to go elsewhere to remind yourself just how lucky you are:)

They hired the right team!

Fantastic. Really good job with the rationale, landscape, people. I’m on my way.