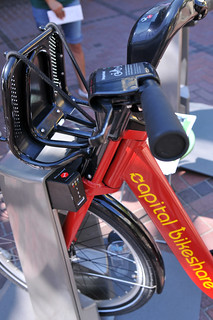 Alta Bicycle Share, the spinoff of Portland-based Alta Planning + Design that has dominated bike-sharing headlines after securing a string of high-profile contracts in major U.S. cities is now getting a much different kind of publicity. Delays to system roll-outs in New York City, Chicago, Boston and Chattanooga have gotten national media attention and have raised questions about the company’s ability to handle their growth. For their part, Alta acknowledges that the culprit in the delays is new software their partner Public Bike System Company (PBSC) is developing to handle the complex wireless transactions and rental processes at the bike share stations.

Alta uses the Bixi platform, which was developed by Montreal’s municipal parking authority by the PBSC. The Bixi system is operated with software developed for them by 8D Technologies. As PBSC began to export the successful Bixi system around the globe, they continued to use the 8D software. But, when PBSC expanded into the U.S., 8D alleges that the company cut off ties and began to use a new software system developed by an American company (Alta only operates the system, they are not involved with the software development). 8D has sued PBSC for breach of contract and the two companies are still trying to work out their legal differences.

Meanwhile, Alta and PBSC secured contracts in New York City, Chicago and Chattanooga. The only problem is, the new software isn’t ready for prime-time and that has led to embarrassing delays in all three cities (the Chicago project is also delayed due to a dispute of the selection process involving the losing vendor who says Alta got unfair advantages in the selection process).

The New York City delay has garnered the most headlines. Their planned 10,000 bike system (privately sponsored by Citi Bank) was supposed to launch last month; but the NYC Department of Transportation has now announced a March 2013 launch date. NYC DOT released a statement this morning that included a comment from Alta Bicycle Share and New York City Bike Share (NYCBS) president, Alison Cohen.

“We recognize that New Yorkers are eagerly anticipating the launch of the bike share system and we will deliver on that promise,” Cohen said. “NYCBS continues work to conclude manufacture and testing of the high-performance software necessary to operate the new system, which is being tailored for New York City.”

Alta is on the final list of two vendors still competing for Portland’s bike share contract (along with B-Cycle). Portland officials won’t comment on the ongoing vendor selection process; but it’s not hard to imagine that they are aware of the headlines involving the locally based company.

If Alta wins the Portland bid, they’ll be expected to launch the NYC system and the Portland system in spring of 2013.

For their part, Alta says there’s nothing to worry about. Asked whether delays in other cities will impact their ability to deliver Portland’s system on time (if they get the contract), Alta Planning + Design President Mia Birk said, “No. We don’t anticipate that the New York delay will affect other cities’ planned launches.”

— For more on Portland’s bike share plans, read our past coverage.

A bit confusing, Jonathan. For a minute there I thought Alta was already the Portland vendor — I didn’t realize they hadn’t gotten the contract yet. Perhaps if the headline said “they _could_ deliver on time”.

Whoever gets it, I hope they seriously consider the locations chosen in PBOT’s crowd-sourced station map.

What would be nice is if there were a way for them to integrate bike sharing into a cohesive transportation option in terms of pricing. I don’t know if it is even possible to integrate into tri-met’s fare system but it would be nice if annual pass holders, for instance, could also have access to bike sharing. Or if you could exchange an adult all zones ticket for half an hour or an hour of bike access.

Does anyone know why why Alta and the Public Bike System Company ditched the tried and true software developed for them by 8D Technologies? Alta and PBSC could have licensed 8D’s software and avoided this major embarrassment altogether.

I am coming to portland in 3 weeks, and was hoping there was something like the Wash DC Capitolshare system already in place. I really thought the D.C. system was fantastic and used it for about 8 days while I was there. I have been anxiously awaiting Chattanooga’s system to get rolling, (pardon the pun).

How can they say that they could deliver on time? They do not have a working product yet…

Is this going to be a limited system that only serves downtown or inner NE/SE?

KXL reported this morning that NYC has delayed their roll out for the third time. Perhaps Portland should look elsewhere?

This is a sign Portland. Don’t do it. Before making any final decisions wait till March 2013.