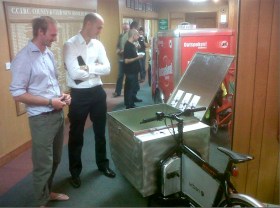 Portland has made lots of headlines in the past few years for our growing crop of cargo bike based businesses; but all the exciting momentum is coming from the grassroots and from individual entrepreneurs. Ironically, the most energy-efficient mode of urban freight delivery is being ignored by state and federal programs designed specifically to reduce emissions.

In Europe however — where a pervasive car culture doesn’t cloud political thinking quite as much as is does here in the states — leaders are moving forward with programs that support the development of a bike-based urban freight delivery industry. According to the European Cyclists Federation, over 30 companies from across Europe came together in Cambridge, England over the weekend to form a cargo bike lobby under the rubric of the “European Cycle Logistics Federation”. Their aim is to, “improve urban delivery and act as a lobby group to promote cycle based delivery solutions.”

This new cargo bike lobby is part of the larger Cycle Logistics effort that receives funding from the European Union’s Intelligent Energy program.

“Any changes that we can put in place to allow freight to be carried by bike have to be worthwhile.”
— Julian Huppert , Member of Parliament for Cambridge (UK)

The founder of a bike delivery company in Cambridge who was part of the weekend meeting told the ECF that, “As a group we will be able to influence and convince stakeholders that freight bikes are a feasible option for delivering cargo in congested inner city areas. More cargo bikes delivering goods means less trucks in city centres and safer, liveable streets for people.”

The event was also endorsed by British politicians. One Member of Parliament from Cambridge said, “Any changes that we can put in place to allow freight to be carried by bike have to be worthwhile. This idea has the potential to take vehicles off our roads, easing congestion and cutting carbon emissions.”

Reading through the ECF’s press release it was very easy to imagine this type of event happening in Portland. The only thing we’re missing is the official buy-in from government and politicians. Several months ago, a few cargo bike enthusiasts rallied together to form TRANSPORTLand, a group led by enthusiasts and local business owners who have many of the same goals and beliefs as the new European cargo bike lobby. The group has a website and has held several events, from regularly scheduled “Cargo Bike Roll Calls” to pedaling together in a parade during the Rose Festival, and of course the wildly successful Disaster Relief Trials.

With some official funding and more buy-in from local, state, and national politicians, Portland could lead America toward a new era in (nearly) emissions-free, bike-based urban freight delivery services.

I will be at the Cargo Bike Roll Call on Thursday, and I’m looking forward to sharing cargo bike experiences in Chicago with you all, and to hear about how we can move forward with a “lobby group”.

How does this lobby convince motor freight operators that they are not directly attempting to “steal” business from them? Is there a European motor carrier lobby? If so, what is their response to this?

As with just about all bike-oriented initiatives, if we tried this here it would likely be seen as infringing on motor freight business and would be heavily counter-lobbied.

As a cargo bike businessperson, I would say that the most encouraging external push would be a lower rate for workers’ compensation insurance, which does not need government intervention.

As it is now, in New York we pay $25 in workers’ comp premiums for every $100 of payroll, which inflates the cost of bicycling to somewhere near that of driving. Worse, it holds down wages inasmuch as it’s a levy on payroll.

You see, in order to scale up my business I need to use mostly identical bikes and trailers, so I can use the same load plan no matter which bike and which rider is doing the job. If I buy the bikes and trailers, and ask the workers to ride them, they are my employees and I need to pay workers’ comp.

You need to be lobbying for the single-payer option on the ACA. When that kicks in everyone is kicking in the same amount for medical so Worker’s comp theoretically should just vanish as a redundancy. Why have two separate pipelines of money with 2 bureaucracies, sucking up money twice as fast and contributing nothing to health care.

Good heavens, I wish I could be at the Roll Call on Thursday – I am going to a wedding! Anyway, I am really happy that Travis & Co. have started up Transportland, which has become a Chamber of Commerce of sorts for us cargo bike businesses. I think there is so much potential for businesses on cargo bikes to flourish, and get an upper hand here in Portland. I often tell people that if I were lord, god, king of the universe, there would be a Builder By Bike in NE, SE, NW, and dare I say SW neighborhoods in town. Stay tuned!