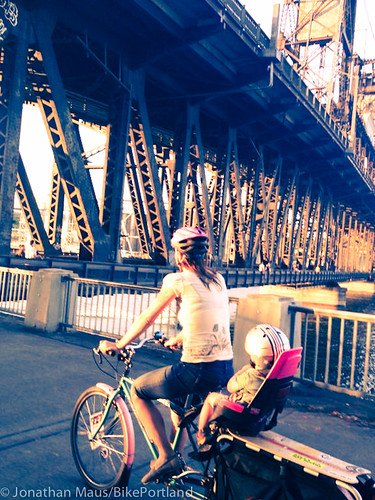 The Steel Bridge, which turns 100 this year, has worked its
way into the hearts of many bicycling Portlanders.
(Photos © J. Maus/BikePortland)

One of the attractions to city cycling often left out of policy debates is how simply being on a bike lets you to interact with your environment in a completely different way than being cooped up in a car (allowing you to “smell the roses” as this excellent NY Times piece illustrates). It sounds sort of cheesy, but it’s common to hear daily bike commuters talk about how they love certain streets and bridges.

I think that feeling comes from the much more visceral way you experience a city while bicycling.

Two Portland icons that often get that type of praise — the Steel Bridge and Terwilliger Parkway — are celebrating their 100th birthdays this year.

Last weekend the PDX Bridge Festival toasted the Steel Bridge with a big party. With its dedicated bike/walkway just above the Willamette River away from auto traffic, the Steel is a fantastic bridge to cross on a bike. With connections to paths through Waterfront Park on the west side and the Eastbank Esplanade to the east, it’s an extremely popular place to ride.

In honor of its centennial, here are a few photos of the bridge from my archives… 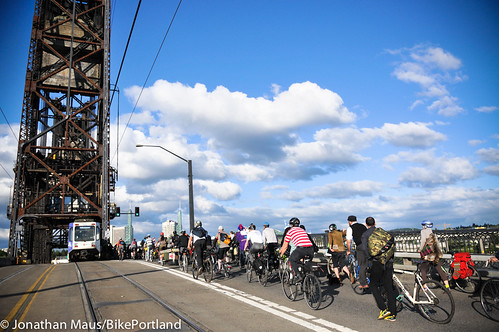 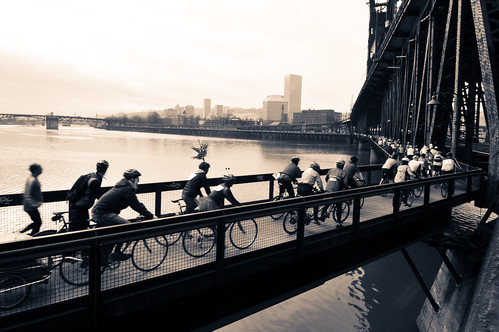 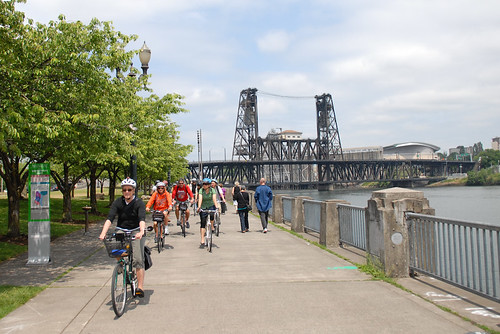 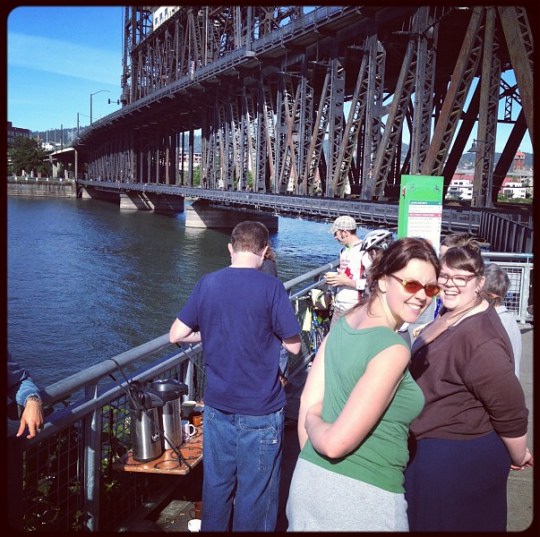 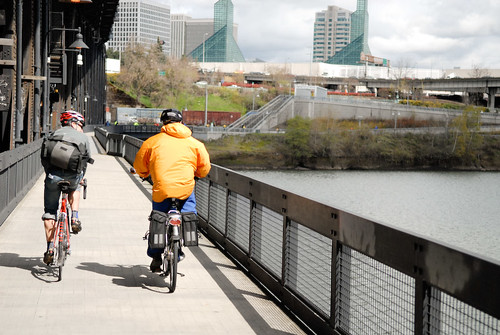 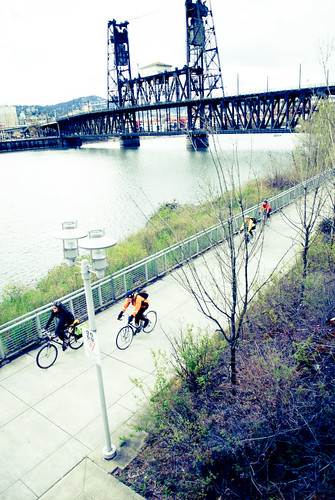 I don’t get up onto Terwilliger Parkway too often; but when I do I’m always impressed. Although I wish it had more space dedicated to people not inside cars, it’s still a gorgeous road to pedal on. I know several people who get to commute on it each day, winding through it’s tunnel of green into downtown sounds like a great way to start a workday. On July 24th, the Friends of Terwilliger will host the city on their beloved stretch of pavement during Sunday Parkways. The monthly event will close the street to auto use and keep it open only for biking and walking. Rolling and strolling on Terwilliger, high above the Willamette, with views far to the east while surrounded by huge trees… Sounds wonderful doesn’t it?

Here’s the flyer for the upcoming Terwilliger Parkway Centennial Festival which begins on July 20th: 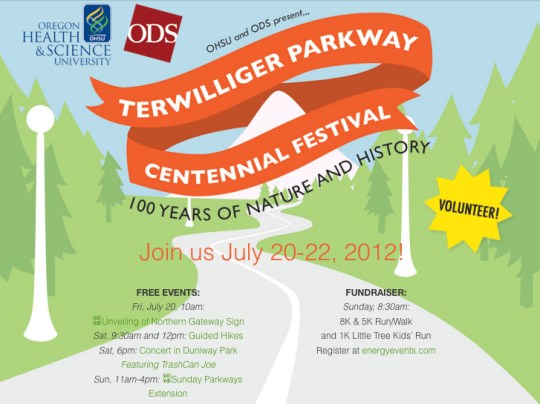 Do you like riding on the Steel Bridge and Terwilliger Parkway? Next time you do, sing a little Happy Birthday tune… and feel free to share your memories and thoughts in the comments.

Steel Bridge rules! It is an extremely unique design, having lifts that work independently with the two decks. I believe it is the only bridge like this IN THE WORLD (confirmed by Wikipedia). Pretty wild that it handles vehicles, MAX trains, freight trains, passenger trains, pedestrians and cyclists in largely separate facilities.

And it goes up and down faster than most 100 year olds I know.

Also guarantees a bike traffic jam during rush hours. The best kind of jam to be in!

My commute has changed and so I no longer have my daily roll down Terwilliger, but I remember that in autumn it could easily be the best part of my day.

The Olmstead brothers (who planned this route as a scenic greenway, and whose firm helped guide the design of Laurelhurst Park) would be proud to see how well their handiwork has stood the test of time.

The only downside to fall on Terwilliger is that copious amounts of leaves can cover debris in the bike lane, such as those fist-size rocks that seem to like to roll off of the hill and into the road from time to time…

It’s no exaggeration that we chose to live in our neighborhood because then we’d have Terwilliger on the commute.

I rode over the Steel Bridge today, and also noted that the lower deck path is now 11 years old. Was there and commemoration of its 10th anniversary last year? It’s almost as unique of a facility as the bridge itself.

Happy birthday Steel Bridge, may you have many more decades of faithful service.

Correction: Terwilliger will be closed to cars on Sunday July 22nd as part of Sunday Parkways.