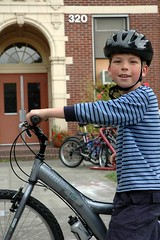 In case you haven’t heard, there’s a battle royale going on in the U.S. Congress over the transportation bill right now. Members of the House and Senate are in negotiations to come up with some sort of agreement about how to actually pass a bill, instead of just extending the current one for the umpteenth time.

Included in these high-level talks are, once again, threats to change how cities and states fund projects that improve biking and walking. House Republicans and some Senators say they want to take away local control over spending on key programs like Safe Routes to School, Transportation Enhancements and Recreational Trails.

Suffice it to say, League of American Bicyclists president Andy Clarke isn’t taking it well. He’s pressing California Senator Barbara Boxer to reject the Republicans’ “small-minded and vindictive attacks” against bicycling and keep her promise to maintain these programs and retain local control over them. In a blog post this week, Clarke listed his top 10 reasons why Congress should not mess with biking and walking programs.

The one that caught my eye had to do with, “military readiness”. That’s new to me. I have never heard a national bike advocate bring that up as an argument. But I like it. Here’s more from Clarke:

“Military readiness? Yes, we can even play that card. The U.S. military is so concerned about the general lack of physical fitness among kids that they are big supporters of the Safe Routes to School program as one way to get our children moving again. Really, who wouldn’t be in favor of Safe Routes to School?”

Clarke links to Mission Readiness, a non-profit made up of retired military leaders who work to ensure our national security by calling for, “smart investments in the upcoming generation of American children.”

One major factor that keeps young people out of the military is the obesity epidemic. Mission Readiness says it’s “one of the top disqualifiers for military service” and that one out of four young adults between the ages of 17-24 are too overweight to serve. One way to combat that obesity problem is to get them biking and walking to school. Here’s how they put it:

While not a silver bullet to this multifaceted problem, one way to increase physical activity and promote weight control is increasing options for more students — and adults for that matter — to safely bike and walk.

…Alone, such investments are not going to solve the nation’s child obesity problem, but they should be included as part of our ongoing community efforts to ensure that our child obesity crisis does not become an even more serious national security threat.

So there you have it. More cycling, more soldiers, more security.

We need a safe bike buffer for kids to ride without the threat of cars
driving around them. Yes I worry about the future of kids being able to
ride safe anywhere these days.

I’m not sure I fully agree. In the absence of national momentum in that direction, the least we can do is educate kids and young adults to ride safely among cars/traffic. Bicycling magazine just had a really good issue with articles around this and the fight in some communities to even allow kids to ride to school. One author advocated for less over-protection of children and more focus on educating them to be safely independent. Not having kids myself, though, I can’t say where I’d stand on it (or how I’d behave if my kids were biking around schools, which I find some of the unsafest locations on my rides due to extremely distracted parents dropping kids off and picking them up).

Just get them, fat, drunk, and riding Harleys.

Nice synergy here…save oil energy and get fit to fight [but we have to fight less for energy worldwide if we cycle more].

As for history…the obesity issue is a valid recruitment concern, especially how it tends to be an inverse correlation (higher weight = lower education attainment)…it reminds me of the US War Department’s problems drafting boys into the WW1/ WW2 military – they had so many underweight and malnourished solders (physical deformities) wash out that the WW2 military decided to support the CCC and other programs that worked to reduce these malnourishment and poor exercise issues of future solders.

JAT in Seattle
Reply to  Kristen

Couldn’t agree more – this is absolutely the key. Bike facilities may be great, but they can’t be put in everywhere.

The trick is, though, how to deal with all those drivers already licensed under the old mono-modal model. I guess the second trick is how to disabuse some cyclists of the notion that they can do anything the want, because, you know, whatever…

Last time I was in Portland it was time to go to an end of the school yr party, by bike, all the kids of the family we were visiting were traffic pros. I was totally impressed.

I find it interesting that Republicans are fighting to take rights away from states. Isn’t that the exact opposite of what the current incarnation of the GOP is all about? Wouldn’t Wash DC control of SRTS be an increase in the size of the Federal government? Oh, I guess it’s “small government and states’ rights” only when it fits their agenda. If I were one of those Dem types I might use this as a call-to-arms.

Chris I
Reply to  Case

I was under the impression that Safe Routes to School was a federal mandate, and they are trying to remove the mandate. Jonathan is saying differently.

I would support abolishing the federal highway program, because I believe Oregon would be better off without the requirements. But if they are going to mandate huge freeways with their highway standards, they need to mandate pedestrian access with programs like Safe Routes as well.

There are many glaring contradictions if you look hard enough. On the Democratic side too. Basically, there’s almost no ideology left in politics anymore.

JAT in Seattle
Reply to  Case

That was the sentence that stood out for me too.

I thought the Republican proposal was to give states transportation block grants with no requirements or guidance on how to spend the money. Overall the Republician intend to reduce total transportation
Spending by 30%.

the existing legislation mandates a set aside of something less than two percent for “transportation enhancements,” including bike/ped. the bill the republicans put forward would lump other things such as environmental mitigation into the set aside, under the name “additional activities,” which would mean that bike/ped would not be assured of getting a piece. the cardin-cochran amendment that LAB is pushing would allow the state DoT to allocate as much as half the “additional activities” funds to recreational trails, but would require at least half to be made available to local governments, school districts, etc. to do whatever (within the scope of “additional activities”), thereby assuring (in theory) that if bike/ped is on the agenda locally it will still get funded.