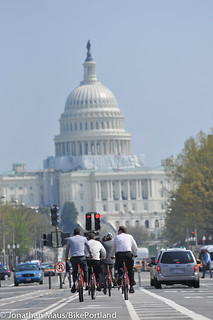 It’s been a very long and winding road for the federal transportation bill. And while it looks like the end is finally in sight, there is still some nail-biting ahead.

The law that dictates how the federal government funds transportation expired over 900 days ago and has survived on extensions ever since. With the Highway Trust Fund facing bankruptcy by fall of 2013, and with idle construction workers waiting to build projects, the House and the Senate finally got their acts together and in over the past few months, both chambers have worked on their own versions of a new bill.

The bill that Republicans attempted to pass out of the House — but failed in doing so — was extremely bad. It scrapped decades of programs and funding for bicycling and walking and it included provisions to pay for new highways with domestic oil drilling. It was even too extreme for some Republicans. Fortunately, the Senate’s bill, which they passed, turned out to be much more palatable. While it wasn’t a slam dunk for biking, most prominent advocates considered it worth fighting for.

When it became clear to the House that no one wanted to touch their bill and it wasn’t going anywhere, they merely OK’d yet another extension of the existing law. Some observers hoped they’d just pick up and vote on the much more popular Senate bill. That didn’t exactly happen, so now the two sides are locked into a conference committee to hammer out a version of the Senate bill everyone can agree on — or at least live with.

Just yesterday, The Hill reported that Senate Environment and Public Works Committee Chairwoman Barbara Boxer (D-CA) says the talks are getting into, “the meaty issues of disagreement between the two chambers.” Boxer is expected to meet face-to-face with her counterpart in the House, John Mica (R-FL) on Thursday.

Meanwhile, national advocates are zeroing in on the Cardin-Cochran amendment — a component of the Senate bill that includes dedicated, set-aside funding for popular programs like Transportation Enhancements (TE) and Safe Routes to School (SR2S). The League of American Bicyclists and the Safe Routes to School National Partnership are urging members to contact their members of Congress and urge them to make sure the Cardin-Cochran amendment survives the conference committee.

“Without this agreement,” says Deb Hubsmith of the Safe Routes National Partnership, “states will be able to use bicycling and walking funds towards more highway lanes.”

A key to the Cardin-Cochran amendment is that it pushes control of the pot of funds that TE and SR2S are included in (the pot has the unfortunate name of “Additional Activities”) down to the state level. Advocates are confident that, given the ability to advocate at the state level, biking and walking projects will continue to be funded at a similar rate as they are today.

To make their case to Congress, advocates are leaning on a recent survey that found 83% of respondents want to maintain and/or increase federal spending on bike lanes and sidewalks (which, ironically came out on the same day as The Oregonian’s ridiculous, anti-bike survey).

The other interesting thing to watch in the conference committee is the fate of the Keystone XL oil pipeline. House Republicans have inserted that project — which environmental advocates call, “Big oil’s poison pill” — into their negotiations with the Senate and are using it as a political football; hoping to force President Obama to pass it along with the transportation bill. Obama threatened to veto the transportation bill if Keystone is in it but at least one key Senator is confident it will remain, and with veto-proof support.

If that turns your stomach, you might feel better knowing that Oregon House representatives Earl Blumenauer and Peter DeFazio are both members of the conference committee. Hopefully, their thoughtful and passionate support of sensible transportation policy will have an impact on the outcome. Like everything in American politics these days, it seems the transportation bill is headed for a last-minute showdown. Hopefully, with our Oregon champions at the table, sanity will prevail. Stay tuned.

— For more, read this blog post from T4 America.

We essentially have three parties in D.C. now. The republicans are split in two, with clear factions of tea party extremists and more traditional moderates. The republican leadership can’t even organize their party to vote on a simple long-term extension of existing bills, and this is why nothing is getting done. No bill can be introduced without being destroyed with ridiculous amendments.

At this point, I would prefer to just get rid of the highway trust fund altogether, and let the states raise their own taxes. If ODOT were to raise the state tax to match the federal rate, we would end up keeping more money here in the end. They would also find it more difficult to fund mega-projects like the CRC. It’s amazing how perspectives change when 100% of the funding has to come from local sources.

the key sentence in the story from thehill.com quoting hoeven on a veto-proof majority for the keystone project:

“sen. baucus has been very helpful.”

there are a hundred other, similar reasons why baucus eventually has to go, though i don’t know who else the democrats could put in as finance committee chair.

I hate politics. Is just the golden rule. Whoever has the gold rules.

Why does the Oregonian have to be so stupidly anti-bike? I want to see Portland turn into a US Copenhagen just to spite them.