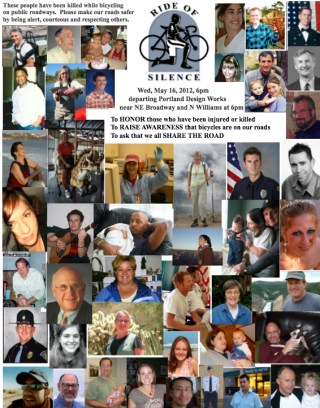 [This story was submitted by Kristi Finney, who became a traffic safety activist after her son Dustin was killed by a hit-and-run driver while bicycling in Portland last August.]

Less than a year ago I’d never heard of the Ride of Silence. I don’t remember how I found out about the website but I came across it one day and it claimed that the organization was created for this purpose:

To be frank, I still wish I didn’t know what the Ride of Silence is. But now I do know, and I can’t ignore it. I can’t pretend it doesn’t exist. I can’t pretend that it’s not happening. Most of all, I can’t pretend there isn’t a reason for it… and that is what my biggest wish in all the world would be, if I could have any wish.

But bicyclists die. They die every day. As a matter of fact, nearly two people die per day while bicycling in America. Not only do I not like the fact of that, but I also don’t like the way that sounds: Bicyclists die. That’s so impersonal. What we really need to say and show and shout out to the world is who is really dying. So hopefully we can all start to think more about what the consequences really mean.

“I see the Ride of Silence as a little more than a group ride honoring fallen bicyclists. It is honoring people. People just like you and me. No, not even just “like” you and me, but … you and me.”

I’ll start: My son Dustin, 28 years old, intelligent, outspoken, compassionate — died; Colin, Logan and Jenna’s brother Dustin was a victim of homicide; Sam and Minnie’s grandson Dustin was mowed down by a reckless driver; Toby, James, Elvina, Bridget, Angie, Gabe, Jonny, Eric, Dan, Jared, Crystal, Sean, Jed, and others — their friend Dusty, whom they’d known since he was just a kid, was stolen from them by a drunk driver; Mitch, Luanne, Kurt, Ragnar, Will, Bruce, Sue, and others who knew him as a committed activist and college student — Dustin was taken from them before they even really had a chance to get to know him… but not before they came to care about him.

So I see the Ride of Silence as a little more than a group ride honoring fallen bicyclists. It is honoring people. People just like you and me. No, not even just “like” you and me, but … you and me. Somebody’s daughter, somebody’s son, a wife, a husband, a nephew, a niece, a cousin, an aunt or an uncle, a friend, a co-worker, Hank or Tracey, Brett or Sheryl, Chris, Nick, Gareth, Angela….Dustin.

And that is part of why I am going to participate in my first ever Ride of Silence. To honor real people killed while riding bicycles. And as a recently bereaved mother, I want to be around others who are thinking of these people, who don’t want these tragedies to happen to other people, to other families. I want to be part of a community that cares about safety and truly wants everyone to share the roads. Because what’s good for people, whether they are brothers riding bikes, friends walking, or mothers driving cars is that we all understand, we all fully appreciate, our right to safe transportation and our responsibility ourselves to help make it happen.

I hope you you’ll join us on May 16th (event details here).

— Publisher’s note: Mrs. Finney joined friends and family of Michael Vu (a young man killed by a hit-and-run driver while bicycling in Oregon City last summer) for a rally outside the Clackamas County Courthouse this morning at the sentencing hearing for the man convicted in Vu’s case (he got 18 months). The rally brought attention to Oregon’s lax hit-and-run laws. Check out more of our Reader Stories here.

Thank you for your direct and (I hope) effective statement of personal grief. Every time I hear about someone being killed while riding, I hope it is the last time it ever happens. I don’t know any of these names personally but I know who they are – sons, daughters, brothers, sisters, moms, dads,…. I’m so sorry for your, …OUR loss.

18 months isn’t Justice, its a slap in the face to the family and friends of Michael Vu

Chris I
Reply to  K'Tesh

A hit and run where someone dies should be treated just like DUII manslaughter. I do not see how they are different, and the vast majority of hit and run manslaughter cases involve DUII.

thanks to lois moss for putting this together. you can help get the word out by printing off and distributing copies of this flyer
http://www.scribd.com/rawillis3/d/92113122-Flyer-12

Exactly! HUMAN BEINGS die, not “bicyclists.” You know, I was already somewhat against using the term “bicyclist,” being generally in agreement with Jonathan’s avoidance of it on this site. But after I read this, something clicked. The term bears a resemblance to the deliberate dehumanization of an enemy. Every state, leader and group gives their enemies a name. Whenever someone wants you to go kill someone, or not care too much about someone they’re planning to kill, you can bet they’ll make every effort to avoid portraying that someone as a human being. Sometimes the names are colorful, like the “Tutsi cockroaches” slain in Rwanda. (And hey, what do you do with cockroaches after all? Exterminate them.) But it doesn’t need to go that far, all it really has to do is abstract the humanity out of it. Like “gay” or “Serb” or “terrorist” or “bicyclist.”

Oh sure sure, I’m sure it’s just a coincidence, just like all the thousands of deaths by “accident” each year are coincidences. In this case I think the de facto state issuing the propaganda is the auto industry and its lapdogs in Washington & Salem. And we are the dehumanized enemy that is no one is supposed to care too much about when we die these oh-so-predictable deaths in a system that deliberately puts us at risk because it’s much less profitable to do otherwise.

Jonathan says “person on a bike” in place of “bicyclist” on this site, and while somewhat better, it’s also unfortunately clunky. But now I’m thinking I might go even further into total clunkiness and start saying things like this all the time:

and so forth. How far would Hitler (I know… I know) have gotten with “Jewish human being?” Not very G.D. far.

I didn’t know that about the term “bicyclist.” I have to thank so many people for helping to educate me. I no longer use the word “accident” when referring to a crash and now I see the wisdom in not using “bicycle.” I like your whole comment…

I’m happy to see the ride happening this year again. I remember taking part in a Ride of Silence a number of years ago here in Portland, starting at Wilshire Park. It had a massive turnout – about 400 people, and had an accompanied police escort. Everyone wore black armbands, which was very touching.

It seemed like, nothing much was organized in subsequent years. Or perhaps subseuquent years’ rides just lacked publicity? Either way, glad to see it happening again this year. I hope it is well publicized. It is a very beautiful and poignant ride.

are
Reply to  Stripes

BTA staged a ride of silence in 2008, but that began in the north park blocks. it was well attended because of the then-recent deaths of tracy
sparling and brett jarolimek. there may have been others in earlier years, but reports were not posted to the national site. the ride in 2009 started at the bikefarm in the northeast, and did not use corking or a police escort. the past two years the ride started and ended in holladay park in the lloyd district. each of those rides had fifty-plus participants.

WOW such a strong MOM! we need stronger laws that protect human transport modes. I RIDE FOR ALL FALLEN RIDERS!

Thanks for your comments, everyone. And for publishing my little article, Jonathan…. I was quite disappointed at the media coverage for our hit and run rally. Every station was there, but they reported only on the sentencing and family reaction of that specifically, though family and friends (including me) worked days making posters with all the names of every hit and run ped/bike victim, had statistics, etc. There was even an attorney guest speaker. I’m glad Miky and his family had their time and their say, but they also especially wanted to get the point across that hit and run laws are too soft and ineffective. 18 months is ridiculous for killing someone in this reckless manner and then leaving him on the road like a piece of garbage. The message is clear: hit and run pays. And that needs to change.

The mainstream news media makes lots of money advertising motor vehicles and sells papers by sensationalizing the ‘bikes vs. cars war’, so it’s no big surprise that they don’t cover stories like that.

Please ride with us on Wednesday. I sent out an invitation to 130-some sometime and year-round riders at my workplace today. One reason: I saw the results of a crash on Clinton this morning. We need a show of numbers, if not of force.

What is the likelihood of the Oregonian informing the community of this event?

Greater, I imagine, if someone suggests it to them directly.

I said this on the Facebook page and I want to say it again here: I would LOVE to be on this ride, but I know my kids won’t stay quiet. I’m sure I’m not the only one who supports you but cannot come this year. I’ll be there next year, if only because we’ll be able to afford childcare next year and I’ll come without my noisy little ones.

Not having a leadership role in this, I can’t speak for The Ride Itself, but I’d prefer to have the kids and kid noise with us than fewer people, no kids, and less noise. My rarely humble opinion.

Does it make a difference if the 5yo girl is just a non-stop talker while the almost 7yo boy has speech delays so will probably be raspberrying? He does that when he’s in a good mood and it just seemed like it would be so easy for people to hear that and think it was disrespect. With his bike helmet on, and the other people on bikes paying attention to the road, it’s easy to miss that he has Down syndrome and is not being disrespectful just being himself. When I imagine myself in the shoes of someone who has personally felt this loss I don’t think I’d want to hear that.

Then we’ll see you next year.

You will. I’ve already got a reminder on my calendar for the end of April to look for 2013’s event.