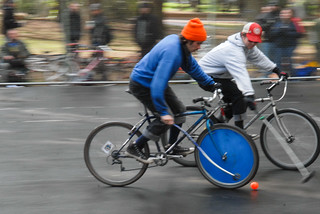 [This story was submitted by northeast Portland resident and president of Portland Bike Polo, Sasha Friedman.]

Portland Bike Polo has progressed over the past ten years from an offshoot of an indie messenger sport to a large group of athletes practicing year-round for national and international tournaments and putting on community outreach programs. Every week in Portland, rain or shine, twenty to fifty people come out to play a fun and challenging team sport on the pavement that combines individual bike riding ability with the ability to work and compete as a team.

Outside of playing, Portland Bike Polo has worked to improve and maintain the facilities at Alberta Park, our home base. We play on what is classified as a “to-be-decommissioned” tennis court, which means that Portland Parks & Recreation doesn’t have the money to fix it up to a point of usability for tennis, nor the money to tear it up out of the ground. PP&R granted us the opportunity to work on the court, so Portland Bike Polo raised over $1,000 to perform repairs and improvements to the infrastructure, making the court playable for both us and PDX Ball Hockey, with whom we share the court.

This July Portland Bike Polo has the honor of hosting the inaugural Western Conference Championships, produced by Portland Bike Polo member Eric Crandall. This tournament will be a city-based team competition with only the best from East Vancouver, B.C., Seattle, Portland, San Francisco, and Los Angeles. Unlike the traditional three-vs-three, fifteen minute polo matches, this event will have nine-person teams compete in hour-long matches. With Cascadia already home to the current National and World Champion teams, the level of play will be very high and very fast-paced.

Bike Polo is a great spectator sport, and there are always quite a few folks who come out just to watch us play. In an effort to increase our fan base, Portland Bike Polo member Arlyn Bement (in conjunction with Universal Cycles) is organizing several exhibition matches during the upcoming Sunday Parkways events at Fernhill, Arbor Lodge, Bloomington, and other parks. Check out the City of Portland website for more specifics.

If you have never seen Bike Polo in action, check us out at Sunday Parkways. Also, find us on season one of Portlandia, and in the upcoming Travel Channel series Unpacked.

— Check out more of our Reader Stories, here.

Great article, and a fantastic sport! The Portland Polo Club is very inclusive so don’t be afraid if you want to show up and try it out. Thanks to the Polo team for the outreach.

My hope/wish is for sanctioned and dedicated polo courts in all five quadrants. Cool article.

Thank you, Sasha, for this article and for being an amazing representative of the bike polo community. Viva El-Presidente!

Hope to see you all on the court Sunday!

I’d like to know what type of bikes are used. Are they modified in any respect to give competitive advantage for their intended purpose or can someone show up with a standard bike and compete effectively?

On the surface, looks like maybe the rear brake is operated with left hand and front brake removed (for right-handed rider I presume). Can anyone elaborate? Anything else get changed/modified/purpose built?

You are more or less correct about the brake. Some riders have come up with ways to integrate the front brake into the single left lever. Some use other methods to operate a front brake with the left hand like a thumb shifter.

The bike frame is rider choice and shifts somewhant based on style of play and the city in which you play.

That should say “unicycle polo”

I watched my first Unicycle Bastard Polo just last week. I though it was amazing!

Kindred spirits on the other side of the planet: http://www.nytimes.com/2012/05/09/sports/motorized-polo-gains-a-foothold-in-east-africa.html?hp