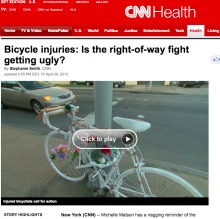 Here’s the news and other cool stuff that caught our eyes this past week with highlights from Boston, Chicago, the UK, and more…

– John Griffin, head of a cab company in London who offered to refund his drivers’ fines if they drove illegally in bus lanes, penned an editorial promoting the idea that people on bikes should undergo training and pay additional taxes. His comments have spurred a backlash from businesses and citizens, some of which are now boycotting Griffin’s company.

– A new report finds fuel-efficient cars save people over $70 billion in gas money, which represents a lot of lost revenue for transportation systems that rely on gas taxes to expand and maintain roads.

– But The Wall Street Journal thinks they know exactly why we have potholes: gas taxes are being “intercepted by the public transit lobby and Congressional earmarkers“. Puh-leeze.

– This month marks the start of construction on Seattle’s new street car line and accompanying cycle track. (You can see more renderings of the project on Jonathan’s coverage of their plans.)

– In the UK engineers are pushing for mandatory collision-avoidance technology to be installed on busses and trucks as soon as 2015.

– We’ve reported in the past how Montreal’s Bixi bike share has been ordered to sell off it’s international operations. We wondered if Alta Bicycle Share might purchase company; but now there’s talk that it could go a British firm.

– Some of the less-successful bike share systems could be struggling because of mandatory helmet laws, says the National Post, citing examples in Vancouver, BC and Sydney, Australia.

– Solo released a line of classically-styled jerseys and one landed in the hands of the Eugene Bicyclist who’s auctioning it off to raise money for local foundations and non-profits.

– Bostonians got a shot at car-free streets during the Boston Midnight Marathon Bike Ride. If you’re thinking of joining them next year, make sure you watch out for frogs.

– In fact, the momentum for bicycling in Boston is growing so strong that some are calling for cycle tracks on major roads, citing Boston’s Copenhagen-like topography.

– Think you’ve seen everything on a bike trailer at one point or another? How about these beehives towed behind bicycles by the Bike-a-Bee project in Chicago.

– During the IBD Summit (Interbike’s symposium specifically for industry insiders) Marian Salzman said bicycle retailers should use Twitter to monitor trends if they want to be successful.

– If you’re looking for a way to get back to nature on your bicycle you might want to check out “bicycle-only season” in Yellowstone National Park.

– You’ve heard it before, now here it is again: young people are driving less while biking (and busing) more.

– Looking for custom grips for that freakbike with gnarly handlebars? Look no further than the Spurcycle GripRings, the multi-colored customizable grips being funded on Kickstarter.

– Also on Kickstarter are colorful, cubical, wireless “Sleep Speak” speakers that will blast your beats at over 80 dB from just about anywhere on your bike.

– And finally, what exactly is the impact of “traffic”? This short film from Mexico explains it succinctly:


— Did you find something interesting that should be in next week’s Monday Roundup? Drop us a line. For more great links from around the web, follow us on Twitter @BikePortland.

“Americans eat too much, sleep too little, work too hard, and travel too fast to live to a ripe old age.”

“For me, the great purposes in life are to have as many adventures as possible, to brighten the lives of as many as possible, and to leave this old world a little bit better place.”

” young people are driving less while biking (and bussing) more.”

While that may be the case, they’re also taking the bus (busing) more. Perhaps that gives them the time to buss? 🙂

Thanks for catching that. I had to look up what “buss” meant but the internet says it’s some derivative of cussing and kissing. I’m not sure how accurate that is but it does sound like something “kids these days” would do.

Did they cover it before or after their Lindsay Lohan coverage?

The video is awesome, less stress is the final and poetic point made!

Did anyone read this bit?

What took everyone by surprise was that 604 cyclists got on that train. (Well trains. The MBTA had to add on another one to accommodate everybody.) Seemed the whole city had taken their bikes out of winter-hibernation at the idea of a midnight bike adventure.

So they crammed 604 cyclists AND bicycles on 2 trains. WOW. That would take about 100 MAX trains to transport that many bikes!

I imagine that they were using the MBTA commuter trains. Quite a bit different from a max train:

Boston has always been a pedestrian city because it was founded long before there were any cars. I am really happy Mayor Menino has taken up the torch of cycling and really pushed it too. Having grown up in Massachusetts I know 1st hand how inhospitable Boston was to bicycling. Clearly that has changed pretty dramatically in the last 10 years.

The T’s trains (Boston’s subway) are pretty basic but functional. And cyclists don’t tend to mob the trains during peak hours. I suspect they don’t have policies about bicycles yet so they simply made maximum use of what was on hand.

The Mexican video is so straightforward that it just might make the politicos here nervous since there is a decided special interest lobby in DC.

Just thought of Acadia National Park. I believe they have a day where cars are not allowed. So if you get to Maine pre-season that might be a really nice trip. Just dress in layers, it is New England after all.

“blasting your beats on a bike” is barely beneficial, and a bummer to all other bi-peds.

I think they already make wireless bluetooth headphones that stay on…

The Wall Street Journal seems blissfully unaware of the direct cause of potholes (frost heave and heavy vehicles) and the factor that makes the cost issue worse: fuel efficient vehicles cause the same overall damage while paying less that the less fuel efficient vehicles.
The gasoline tax has seen few if any increases recently so the overall value of the fuel tax has decrease versus inflation.
But if the WSJ feels that it is best to coddle the fantasies of petroleum worshippers I look forward to their demise.

plus, anyplace where studded tires are allowed, like Oregon, has a significant additional cause of road damage above and beyond just vehicle weight.

Chris I
Reply to  BURR

Engines have become more fuel efficient, but vehicle weights have increased significantly, resulting in fairly minimal average fuel economy improvements. The end result is increased road wear and reduced gas tax income. The gas tax should be raised by 5 or 6% every year, but this will never happen.

Average car weights are now declining. Not only are newly redesigned cars increasingly dropping weight vs. the same version of the old car, but the mix of car sales is much less biased towards larger, heavier vehicles than it used to be.

As for the SleekSpeak, I wouldn’t worry about noise levels too much. They didn’t say at what distance the 80dB reading was measured, but if they used the standard distance (1M) that’s the amount of sound you get from a typical stereo speaker with 0.1 watts of power.

Full disclosure: for years I’ve wanted a small bike-mounted speaker so I could have headphone-free tunes on long rural rides. I actually now have a very tiny speaker plugged into my iPod in a patch pocket on my backpack strap (considerably less loud than even the SleekSpeak, FWIW). In any event, I see this as a solution rather than a problem.

The CNN article says:
Matson’s story is a reminder of a growing problem in many of the nation’s busy, sprawling urban landscapes: More people are using bikes for transportation amid a culture and infrastructure designed for automobiles.

The problem is not the bikes, it is the cars. Drivers kill many, many other drivers – no bikes involved with that.