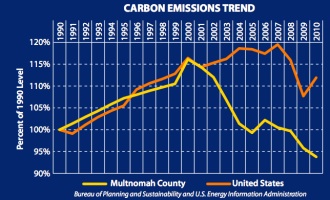 One would expect the decline to continue.
(Graphics: City of Portland/Multnomah County)

A new two-year progress report on Portland and Mutnomah County’s 2009 Climate Action Plan released today (PDF) shows per person carbon emissions have dropped 26 percent in Multnomah County since 1990. Overall, emissions are 6 percent below 1990 levels. These reductions come despite a huge spike in population growth and a national trend that is headed (unfortunately) in the other direction.

The City’s Bureau of Planning and Sustainability and the Multnomah County Office of Sustainability tout a variety of efforts that have led to the emissions reductions: more energy-efficient homes; curbside food composting; green buildings; 7,000 new trees planted last year; and of course, a continued focus on a transportation system that gives people options to driving.

The progress report found that total transportation emissions are down one percent from 1990 levels. However, per person emissions from transportation have dropped 22 percent in that same period. According to the report, one of the reasons for those declines are “increasingly complete and connected neighborhoods.”

The report also found that in 2010, total gasoline sales fell to just below 1990 levels despite a 26 percent increase in the population. This echoes an overall decline in per capita vehicle miles traveled in the Portland area that has been falling since 1997 and is now as low as it has been since 1984.

The 2009 Climate Action Plan included a chapter on Urban Form and Mobility. One of the goals to achieve (by 2040) was to, “Create vibrant neighborhoods where 90 percent of Portland residents and 80 percent of Multnomah County residents can easily walk or bicycle to meet all basic daily, non-work needs and have safe pedestrian or bicycle access to transit.”

In the new two-year progress report, the City and County specifically point out that the new Sellwood Bridge is coming with 37 feet of “bicycle and pedestrian space” and just 24 feet of lanes for automobiles, “greatly improving bicycle and pedestrian safety and mobility across the structure.” The report also gives a nod to PBOT’s nearly 10 miles of new Neighborhood Greenways that were built last year.

But on a less cynical note, I like what BPS Director Susan Anderson said about the progress, “No single action, nor single entity—public, private, non-profit, or individual—is responsible for these accomplishments. Instead, they are the result of many thousands of people, businesses and organizations taking action every day—at home, at work, and at play.”

Put another way, simply riding your bike is a great way to feel like you’re doing your part.

Looking at a Washington County version would be interesting….

Chris I
Reply to  Paul Manson

Do any of the neighborhood Solarize programs contribute to the reduction?

The report specifically mentions the success of the Solarize programs:

“The City supported two Solarize Portland campaigns in 2011, resulting in over 120 new solar system installations (2011), and over 570 installations since the program’s inception in 2009.”

Before everyone gets too excited, let’s keep in mind the much increased contribution of the newer vehicle fleet. Cars built in the 70s had far higher CO emissions than newer ones. 80s cars were better. Those vehicles were a fair portion of the fleet in 1990, but are rare today. Technology gets some of the credit.

If improved vehicle technology is such a huge portion of the savings, then why is that not seen nationwide?

That’s my question as well, jram. Hey, J-R, what fleet are you speaking of? Years ago I saw an article on the sustainability/carbon question involving the serviceable autos from the 1950s vs. autos from the 90s filled with nasty plastics and one way components. Guess which one was the proper choice, despite a slightly higher exhaust emission? Here’s the point of note to me in this post…

“The report also found that in 2010, total gasoline sales fell to just below 1990 levels despite a 26 percent increase in the population.”

For global warming purposes, it isn’t quite that simple. CO results from incomplete combustion, but unlike CO2, CO isn’t a global warming gas. (The use of the term “carbon emissions” in the report is less than scientifically precise, and measuring emissions of greenhouse gases in “carbon dioxide equivalent” is preferred.)
Better combustion will reduce CO emissions, but may (due to increased presence of oxygen for better combustion) actually increase CO2 emissions. What really reduces greenhouse gas emissions in our transporation fleet (besides less driving) is improved fuel mileage. We are beginning to see the benefits of greater efficiency since about 2007, but for years the US languished or backslid when it came to fuel efficiency in the passenger fleet.

“but for years the US languished or backslid when it came to fuel efficiency in the passenger fleet.”
decades, actually.

This report is encouraging, and moving in the right direction, if also frustratingly slowly.
It is interesting to compare both our local results and their presentation to how, for instance, Germany looks at its progress along the same axis. They’ve made more progress but feel less sanguine about it; frame it as a recipe for failing to meet their targets.

What went wrong in Germany with solar power.

We have the same problem with wind. It is not a consistent power source. When the wind speed is to slow or to high for generation, then you have to fall back on conventional power generation. That isn’t done at the flick of a switch. Turbines must be spinning at the ready to pick up the slack and that means burning coal, natural gas or oil just in case. This is the carbon foot print that is never mentioned with wind power.

That sour-grapes-Lomborg doesn’t like renewables shouldn’t surprise anyone. Here’s a different take, on integrating solar power into the European grid.
http://www.smartplanet.com/blog/energy-futurist/why-baseload-power-is-doomed/445?tag=search-river

Actually the cars built since then get worse mileage because of the engine controls. If you want to buy a car that uses less gas you want to buy one from around 1990 +-. Most of the cars you see around now are gas hogs, even new ones on the lot have very poor ratings.

I would also like to see the numbers for Washington and Clackamas counties. And It would be nice to see some flow charts that included total energy consumption, which appears to have risen, as well as specifics to the demographic trends.
Real environmental cost for a solar array on a single family house in a city that has an existing power grid is incredibly steep (including mining, transportation, maintenance, storage,etc…); and, if you removed the subsidies and take a look at the effect of artificially inflated prices that the increased demand by niche consumers in the first world is having on off grid communities in the developing world that are being priced out of that technology, people would look elsewhere for a solution.
I wonder what these figures would look like if we weren’t still getting 2/3 of our electricity from hydroelectric, and what the total numbers are for interstate energy transfer during the same time period.

We are getting the raw end of the stick on the interstate commerce. Our electric costs are very low compared to what we get in return.

Better cars would impact Multnomah county to the positive, even with the nasty plastics, because the plastics aren’t made here, so we benefit from the end product, someone else gets the negative impact of the manufacturing process.

Working from home reduces carbon emissions as well. Portland area is a hot bed of work from home. I’ve been doing it for 3.5 years. I don’t even fill my car once a month.

Multnomah county gets the benefits of a lot of programs like solar and wind power, without suffering the negatives related to the manufacturing and day to day operations

You didn’t say how they came up with the 26% number? What is their method of measuring this? Do they have a laser device that measures the carbon in our atmosphere? Is it from some math somebody did on their laptop? How did they get the number?
If there was a chance that carbon creates global warming, wouldn’t that be a good thing to help thwart off the coming ice age?
I believe nature has ways to balance these things out. As the earth warms more trees and ocean plant life thrive (algea). The plant life remove the carbon. ….

Math on a computer, spreadsheets, gasoline sales in Multnomah Co., that sort of thing. Everybody’s doing it. It is a lot of work, but not impossible to get a pretty good idea of what is happening, trends, etc.

As for how extra carbon dioxide affects our atmosphere, don’t take it from me – even National Geographic has gotten on board:
http://video.nationalgeographic.com/video/national-geographic-channel/full-episodes/ends-of-the-earth-1/ngc-six-degrees-could-change-the-world/

“If there was a chance that carbon creates global warming”

another video for you, jim
http://www.climatedots.org/thingshappen/