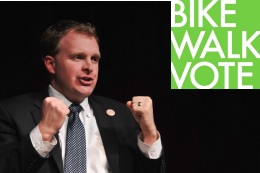 After a thorough evaluation process that included in-person interviews, a questionnaire and ride-along with all three major candidates, political action committee Bike Walk Vote has announced their endorsement of Jefferson Smith for Portland mayor.

Bike Walk Vote co-chair Evan Manvel said today in a phone interview that Smith’s “Commitment, record, and leadership on equity as well as his focus on not spending all of our money on new infrastructure and highways,” are key things that stood out for them. Manvel also cited Smith’s work to “engage the whole city and work with non-traditional power brokers” as traits that were important to their choice.

“We encourage Portlanders who care about biking, walking, and transit to support Jefferson Smith, who has great vision and a commitment to a city that works for everyone,” added co-chair Peter Welte in a press release.

Smith is also the only candidate who has taken a skeptical stance on the controversial Columbia River Crossing highway expansion project. (Read more about Smith’s stance on that project and other issues in our interview.)

Manvel said given the strength of the candidates it was difficult to choose between Smith and Charlie Hales (a former City of Portland Transportation Commissioner who oversaw our first bike lane and helped set streetcar in motion). In their press release, Bike Walk Vote gave a “special acknowledgement” to Hales, whom they said, “made a commendably strong impression.”

However, in the end, Hales’ stance on the CRC hurt him. “Hales has been sort of in the middle on the CRC,” said Manvel, “While Jeff has continued to ask tough questions.” (It’s worth noting that Manvel is an outspoken critic of the CRC project and has reported about it extensively for the Blue Oregon blog.)

As for Eileen Brady, Manvel said, “We think she’s got a positive outlook as far as walking and biking go… But her reluctance to increase investment in local transportation was at odds with what we were hoping for and her general support for the CRC was also a disappointment.” Brady’s stance on funding (she was the only candidate that did not propose a new funding stream for transportation at a recent debate, saying PBOT should instead look for internal efficiencies), the group said in a statement, is “putting her at odds with Portland’s vision for a healthy, sustainable city.”

To make their decision, Bike Walk Vote conducted face-to-face interviews, compared responses to a questionnaire, evaluated their performances at the active transportation debate earlier this month at PSU, and did a “rolling interview” where members joined each candidate for a bike commute.

Bike Walk Vote’s December 4th kickoff party drew over 100 people and was co-emceed by U.S. Congressman Earl Blumenauer and Multnomah County Commission Chair Jeff Cogen. With their endorsement decision made, the group now plans to mobilize the community in support of Smith.

Back in January, Smith also earned the endorsement of the American Federation of State, County and Municipal Employees (AFSCME).

— Learn more at BikeWalkVote.org and browse our Race for Mayor 2012 story archives.

“Hales’ stance on the CRC hurt him”

is that the only alternative?

DE
Reply to  are

Yes. The Common Sense Alternative makes no sense at all.

Chris I
Reply to  DE

I think you need to expand on this comment.

maybe Bike Walk Vote is taking the longer/more dynamic view and figures dumping the CRC will make all the other things that much more feasible?

I’m voting for Jefferson Smith and I hope that Walk Bike Vote will continue to inform Active Transportation advocates of candidates’ stances on issues. We could get a lot more done if we voted as a block. I couldn’t believe that Bob Stacy lost the Metro vote last year and so few Portlanders had voted.

The bike community never supported Stacy and his CRC opposition. Bikes got the reputation for having no political action behind their words.

Metro owns the CRC land, and there will be no CRC if Metro run by Stacey says no CRC.

We would not have the Fast Track LUFO resolution on the CRC that was shoved into Metro by Tom Hughes and introduced by Rex Burkholder after Stacey lost.

BTW, Evan who controls his PAC is a quiet supporter of the CRC proponents. Evan is close friends with Rex. As is Rob Sadowsky and just about most of the people at the BTA, Alta Planning, and bike walk vote party. The bike community gave a lot of cash to Rex who supported the CRC, and is the main pusher.

To mention this I’m labeled as rude and offensive.

I’d give up a finger to get Bob Stacey as mayor of Portland.

I’ve been undecided until now. Thanks for the push.

What’s his vision for getting bikers across the Columbia?

you mean the big dudes who ride Harleys? No idea.
Or is this a trick question?

There are already two bridges that can accommodate motorcycles.

Chris I
Reply to  Jonathan Radmacher

I would imagine that he supports the idea of a local access bridge/phased approach.

1. Build local access bridge to Hayden Island from Marine Drive with a bike path or bike lanes. Close Hayden interchanges with I-5
2. If traffic demand permits, continue local access bridge west of current I-5 bridges and connect it to Vancouver. This bridge would also have a bike path or bike lanes.
3. Upgrade/rebuild rail bridge on the west end of Hayden Island for truck access and future rail expansion. This bridge would also have pedestrian/bike access.

People should contact Evan and ask him to make the PAC a bit more democratic.

The SF Bike PAC allows every member to vote and have an open caucus. SF votes on school board, the race where voters really need to know who is pro or against safe routes to schools. Evan’s pac would not touch school board despite my request.

In the case of Mr. Smith I agree with Evan and his few friends. This is Evan’s PAC, not a member PAC like many teacher’s unions.

BikeWalkVote PAC is not quite a super PAC, but it is too much in bed with Earl. Evan and friends won’t send him a question on the CRC cause they know he is pro CRC. Try to call Earl’s office and get a clear answer. It makes for a fun phone call.

Do you really think that the bike/ped featrures on the CRC are going to make it to the first phase building> I’m betting that they will be deemed superfluous and be part of the next “phase” to be built when funds are available (read: when the bridge is rebuilt in 50 years). Talking to commuters from Vancouver (and I used to be one of those commuters), most Clark Country voters (especially those outside of downtown Vancouver who don’t work in downtown Portland) have no intention of voting for, paying for, or taking light rail into Portland. The only way light rail will go into Vancouver is if Portland pays for it, and they still won’t take it.

Some people will take MAX from Vancouver if the toll on the bridge is set high enough. And with how much the bridge will cost, the tolls will need to be very high. But it’s true that express buses or regional rail, direct to central Portland, would be better than the Yellow Line for most people in Vancouver.

Congrats to Jefferson on the endorsement! Thanks to all who have supported Bike Walk Vote and influenced the process. The endorsement weighted the two most supported questions by attendees at the launch party – the CRC and transportation equity – heavier than other questions.

Thank you Bike Walk Vote for making sure the stakes are raised for equitable active transportation and transit networks in this election!

Thank you Bike Walk Vote for all the hard work to organize and inform. It is a great and vital service you are providing.

Our Office (Northwest eSource) is JUST down the street from Jefferson… but regardless of proximity I think he is the best choice hands down, and I’m very excited about his career moving forward.

I thoroughly enjoyed your interview and your articles and look forward to more great coverage!