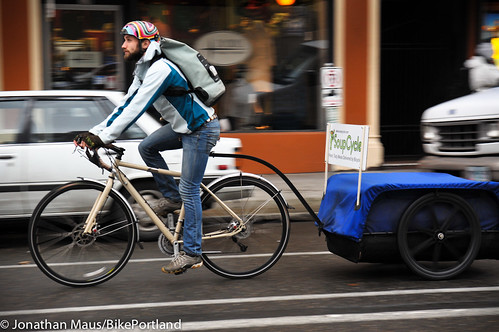 SoupCycle Founder and CEO Jed Lazar pedals in downtown Portland. He estimates he’s made about 15,000 of the company’s 50,00 deliveries since July 2008.
(Photos © J. Maus/BikePortland) 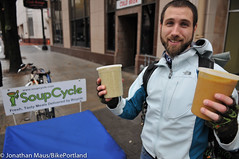 Since Lazar launched the business back in July of 2008, the company has grown to nine employees (two are based in Corvallis) and it shows no signs of slowing down. Hoping to learn the ingredients of his success, I sat down for a chat with Lazar last week.

“I could never have conceived of the reception SoupCycle has gotten,” said Lazar as he thought back to the company’s early days. When he started SoupCycle, he saw it as a three year project. “I wanted to put entire life energy into a company and see where it took me,” he recalled. 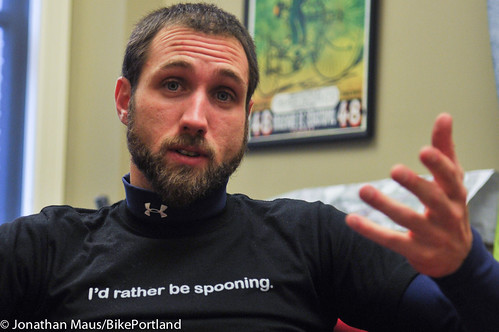 Lazar and his “I’d rather be spooning” shirt.

His energy has powered SoupCycle into a flourishing business that employees nine people (two of whom are based in Corvallis) and boasts 700 “soupscribers” who pay about $16 a week to have handmade soups, salad and bread delivered to their door.

SoupCycle employs six “SoupCyclers” who pedal a wide swath of the city to fill those orders. The current delivery area (what Lazar calls “Souplandistan”) stretches from SE Holgate to NE Ainsworth and from downtown and Northwest out to 52nd Ave. Instead of offering company bicycles, Lazar has employees ride their own bikes. He says that’s because he spent a summer as a pedicab operator and he saw how people treated company trikes. “They’ll take care of it better if it’s their own bike,” said Lazar, “I also want people to know their bike and feel comfortable riding it.” (Employees get a monthly bike maintenance stipend.) 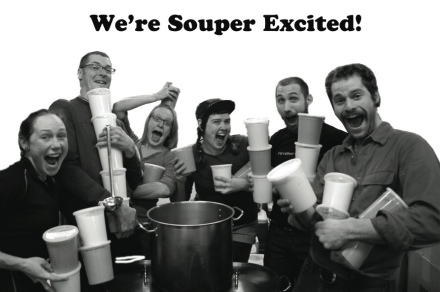 The set-up of choice is a cargo trailer (made by Blue Sky Cycle Carts in Sutherlin, Oregon) that attaches to the bike’s seatpost with the signature blue tonneau cover and the SoupCycle billboard toward the front. Lazar says he used electric-assist in the past but has scrapped it as his customer base grew because the batteries couldn’t carry enough charge to last an entire delivery route. “I’d have this heavy bike with the dead battery and no charge left in it.”

With all the great cargo-bike options available these days, I asked Lazar why he doesn’t use a bakfiets or other cargo-specific bike. “Cargo bikes cost about $3,500, our trailers are 1/6th of that price.” A fleet of pick-up trucks would be even more expensive; and keeping overhead down has been a key to his success. 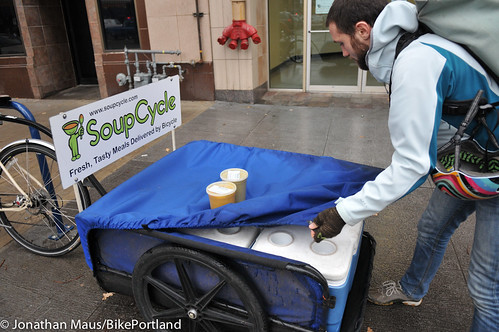 Lazar started SoupCycle just after the economic meltdown, which you’d think wouldn’t be a smart business decision; but he actually credits that for part of his success. “I’m really happy that we started the business just after the recession hit, rather than before. Knowing that, it made us start a really frugal and lean… We’re kind of DIY business and that has saved us because who knew we’d have a recession that lasted this long?”

So, how has a soup-by-bike business lasted so long and done so well? Surprisingly, Lazar says it’s not about the bike.

“We don’t rely on the bicycle to bring in our customers,” he says, “Our success came because we do what we do extremely well. Nobody is going to sign up for SoupCycle just because they like bikes, they’ll sign up because our soups are incredible. They like, as a side note, that it’s delivered sustainably.”

A few of his customers don’t even know they deliver by bike “until we show up with a helmet on,” he says.

Even his employees don’t show up because simply because they love biking. “The incredible thing about Portland,” says Lazar, “Is that there’s a wealth of bike-loving foodies and my employees are all of both.” 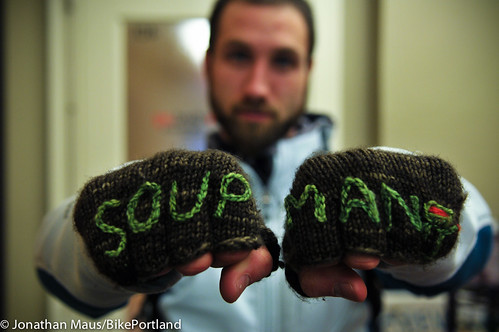 Lazar figures he’s made about 15,000 of the company’s 50,000 deliveries; but as the business has grown, he has stepped back from his weekly delivery duties. When I asked about his time out on the streets pedaling soup around the city, he remembered the dog days of winter, when the relentless rain and cold made deliveries a challenge. “I remember gloves so wet I could wring a puddle out of them… Delivering in the winter was tough, but that’s when soup is really popular!”

“When somebody in rural Ohio hears that a soup company delivered 50,000 soups by bicycle, it has to make them consider bikes in a new light — as an actual, plausible alternative to the way business is done in America.”

The job is much easier, he adds, because of the warm reception he gets from customers and people on the streets (except for bike messengers, whom Lazar says won’t smile back at him due to what he sees as a “huge cultural rift between them and SoupCyclers”).

“I think it’s one of the best jobs in the city. People are happy to see a successful bicycle-based business because it fits into their idea of the world they want to live in.” Then Lazar added with a laugh, “And I think people are happy to to get food delivered to them.”

Beyond dollars and cents, Lazar embraces the activism side of his business. But when he first started out, Lazar recalls being timid about putting green first. “I had some fear around making our mission about sustainability because I knew not all our customers would be interested in that.” But as SoupCycle has grown, so too has Lazar’s confidence. “Now that we have a strong base of loyal customers, I’m more confident that our message can be focused on why we started the business in the first place — local, organic, sustainable, bicycles, sign the petition!” 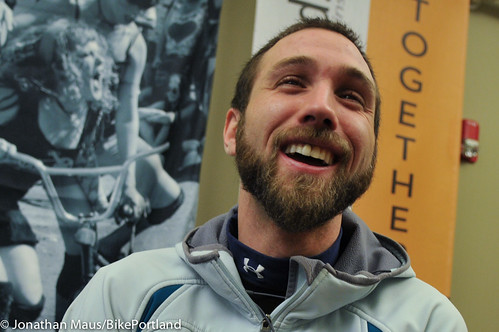 A former treasurer for the now-defunct Bicycle Business League (which he says is no longer active simply because all the members are too busy running their businesses), Lazar knows that he represents something greater than just his company.

Lazar acknowledges that one of the purposes of SoupCycle is to “promote a green lifestyle” and the more people hear about his success, the more he’s fulfilling that mission.

“When somebody in rural Ohio hears that a soup company delivered 50,000 soups by bicycle, it has to make them consider bikes in a new light — as an actual, plausible alternative to the way business is done in America. They probably won’t start a bike-based business, but they might try commuting by bike.”

— SoupCycle is just one of many Portland-based companies that are proving bicycles can make viable delivery and freight-hauling vehicles. For others, check out Portland Pedal Power, B-Line PDX, and Magpie Messenger Collective.

So awesome. Congrats for making this whole bike-based business thing a reality and for being a pioneer of sorts on it.

Huh, that is awesome! I’ve personally seen more folks from the various bike delivery companies out and about recently, which is great.

“The job is much easier, he adds, because of the warm reception he gets from customers and people on the streets (except for bike messengers, whom Lazar says won’t smile back at him due to what he sees as a “huge cultural riff between them and SoupCyclers”).”

Congrats to Jed and all the Souperstars @ Soupcycle. We have been customers for a year or so and have enjoyed it tremendously. Not only do we get a night off from cooking, we get healthy, tasty soups, salad (salad dressing that is so good I have to stop myself from drinking it straight) and bread. The variety is nice and everyone in the family has their own favorite. The very best thing about Soupcycle is the OUTSTANDING customer service. They are all friendly, happy folks who clearly enjoy what they are doing and truly appreciate you as a customer. I have never received a delivery without a big smile no matter what the weather. I am already looking forward to soup day.

Excellent work. Great to get such a thorough profile.
“Cargo bikes cost about $3,500, our trailers are 1/6th of that price.”
Amen. And as your article notes, everyone gets to bring their own bike.

It’s also worth pointing out that the trailers are Blue Sky Cycle Carts, handmade down in Southerlin.

Thanks Lee. Added that to the story. — JM

Wow, a Made-In-The-USA trailer for under $400? I had not heard of Blue Sky before.

great report!
But where is a photo of my grand daughter Montana?
She is a cook as well as a bike rider!

Mrs Dibbly & I have been “soupscribers” for over a year now and we love it. As has been said above, the soups are great and it is *so* nice to not have to cook 1 night/week. In addition, some of our favorites are soups that we probably never would have tried on our own. (Beet & pear didn’t sound very good, but we gave it a try and it’s amazing!)

Every week there are 3 choices of soup: 1 vegan, 1 veggie, and 1 with meat. When you sign up you specify a default. Reply to the weekly email if you want one of the other ones.

Our delivery day is Wednesday, and I was really wondering how Soupcycle was going to do deliveries in the awful weather last week. Like true Portlanders, they came through.

… here’s to many, many thousand’s more soup deliveries!!

Very, very cool. One thing I noticed in the top picture: It looks like Jed has his seat too high. Unless he is coasting and pushing his heal down, he needs more bend in that leg.

I’d have a hard time arguing with 15,000 deliveries. Seems to me the fellow knows what he’s doing.

Unfortunately, I don’t live in “Souplandistan” but I know Jed and have tried some of the soups …. they have ALL been really delicious and healthy. What an amazing idea and an amazing business.