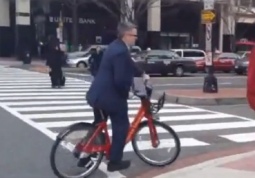 Adams on the streets of DC. (Note: This is
a still from a video, he’s about to roll up onto
the sidewalk)

Portland Mayor Sam Adams took a ride on Washington D.C.’s bike-sharing system last week. Adams took a break from the U.S. Conference of Mayors annual meeting to rent a bike from D.C.’s Capital Bikeshare service and his office has released a short video of it.

In the video (below), Adams swipes his credit car in the kiosk and checks out a bike. His analysis? He noted how light the bikes where (compared to ones he tried from Lyon, France several years ago) and said, “I like them, they’re cool,” and then added, “We’re going to have them on Portland streets very soon.”

Thanks to a $2 million federal grant to cover start-up costs that was approved back in December, the City of Portland is due to release a request for proposals for a bike-sharing system vendor in the coming months.

With 1,100 bikes and 110 rental stations, Capital Bikeshare is one of the country’s largest and most successful bike share programs. It uses the “Bixi” system developed by the municipal parking authority of Montreal, Canada and it’s operated by Alta Bicycle Share.

— For more on Portland and bike sharing, browse our past coverage.

We don’t have a bike share in Portland yet, because? Seriously, if Tulsa can do it, anyplace can do it.

Because true to Portland form we will complain about it until it never gets done.

Portland does not want to do this, I’m being serious, a full explanation will be made in the future via a website. I predict with high confidence that most readers on this site, if not all, will agree with me. 2012 is going to be an interesting year.

Good point. Seems like in the last 10 years, with very little exception, if it’s a good idea that needs to be done to keep people moving or keep federal transportation funding, then it’s Automatically Wrong According to the Voters here.

In my mind, the two issues you bring up will pretty much be non-issues in the future. There are, however, two other problems I see in the future: the first problem is getting mayoral support for the best plan, based on merit, that will genuinely fix our transportation system and the second problem I’ll describe with an analogy….you know when you’re playing a game and you’re confident you’re going to win, but in the end your opponent eventually wins because they had the rules of the game changed in their favor….that’s the second problem. I believe both problems can be solved by the people. So that leaves only one problem left, how do you get the people really motivated to solve both of the aforementioned problems? Let’s hope that 2012 is the year the people become really motivated.

Anyways, if a bike sharing program is implemented in Portland, it will allow the issues that you’re concerned with to continue, believe it or not. PDOT does not have all the information. This website that will be unveiled in the future will give them the missing information they need, in addition, it will reveal why the two issues you bring up will be non-issues.

The suspense is killing me!!!!!

I used the D.C. Bikeshare system when I was there a couple of weeks ago, and it was great. I want to see it in Portland as well, but we’ll need even better bike infrastructure than we have now to pull it off.

I haven’t biked around DC before. How does the bike infrastructure there compare?

I’m from the northwest and have lived in DC for 10 years. A few years ago, DC’s bike infrastructure and bike culture was abysmal, but it’s decent now. Portland has always been way ahead of us. My point is that if this can work in DC, it can work in Portland a million times over.

it’s illegal to ride on the sidewalk right there… write yourself a ticket, Mr. Adams…

You can ride on the sidewalk when going to or from a station.

You’re supposed to dismount and walk.

Where is your helmet?? LOL

Many thanks to Mayor Adams and his staff for working hard to bring Bikesharing to Portland. This is going to be a great addition to our city, and one that I think will grow to become another essential thread in the fabric of our sustainable and innovative transportation network. While it looks like it may need to start out modestly, in the central east and west sides of the river, it has tremendous potential to expand into the surrounding neighborhoods and connect with other town centers and transit nodes.
What I really love about Bikesharing though is that it gets more people on bikes for more trips, while creating real, permanent jobs in our city. This is definitely going to be another win-win for Portland!

I don’t know about DC’s on-street bicycle infrastructure, but I do know that its bike TRAIL network is amazing! The Mt Vernon Trail is stunning and quite useful for getting to many populated areas. The W&OD is a 45-mile paved trail! The C&O Canal path is 184.5 miles long! Among many others…

Portland is WAY behind in actual off-street trail construction. Look at DC’s trail network and sigh (and theirs is nothing compared to that of Minneapolis): http://bikewashington.org/trails. And that list doesn’t even count Zoo Review, Little Fletcher, or many other DC-area trail.

Perhaps Sam will want to stay in DC after his term is over? I’m sure there is plenty of oportunity for him there. That would be a fresh new start in a place where people don’t know his history so much

I’m pretty sure Sam’s future is bright even within Portland. Heck, especially in Portland.