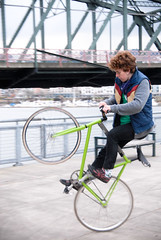 What do fixed gear
bikes say about a city?
(Photo © J. Maus/BikePortland)

The Priceonomics Blog has delved deep into their bicycle price guide to rank cities according to (among other things) a “Fixie Index.” The blog searches and then compiles pricing information from “millions of listings” on the web including eBay and Craigslist.

Since “Fixies (fixed gear bikes) are considered to be a strong indicator of hipsterness,” writes the blog’s author Rohin Dhar, they decided to run the numbers and see which cities would come out on top.

According to their analysis, the city that came out on top wasn’t Portland (much to their surprise):

By mining our database of 1.3 million bicycle listings, we can tell what are the largest markets for used bicycles, how the prices vary by region, and where people who prize fixed gear bikes live.

The blog ran the numbers nationwide for the number of fixies per capita and the winner was… San Francisco. That surprised them:

Before we ran the numbers, we were pretty sure the answer would be Portland. San Franciscans (which we are) take a particular delight in being weird, but not being quite as weird as the people from Portland. This seemed like a great opportunity to point out “hey we like these impractical but cool bikes in San Francisco, but we haven’t taken it too far like those misguided folks out in Portland.” 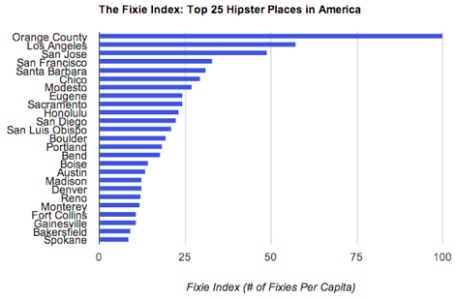 They then ranked cities according to the overall size of their “bicycle market” (the number of bikes for sale). San Francisco came out on top; but after adjusting the data for population, Portland ended up third (behind Bend and Boulder).

They also ran the numbers through several other datasets and came up with some interesting results. They even looked into the median price of bikes being sold and ended up debunking a widely read 2009 Freakonomics article that said Portland had fallen victim to “bike inflation.”

In the end, Mr. Dhar hilariously concludes that, “Unfortunately the data did not comply with our desire to tease the people of Portland,” and that, “Despite our best efforts to paint Portland as a bunch of hipster bike snobs, the data simply does not support such a conclusion. The people of Portland just seem to really like bicycles, but not ones that are particularly expensive or difficult to pedal up hills.”

Check out more on The Priceonomics Blog.

Sounds like Bikesnob’s Pistadex. Though clearly a little more in depth

I think it’s funny they went through the trouble of compiling all these data-sets….They could have just asked. 🙂

I just went to LA for xmas/NYE. There were lots of huffy and swhwinn cruisers on the beaches. The ride of choice for people in the city was definitely fixed geared bicycles. I would guess that outside of beaches, we saw only around 20 people on bikes. Probably 15 of the bikes were flourescent pink/ purple/ green/ or orange bikes with no hand brakes. I didn’t see helmets or lights. I rode about 20 miles one day and 45 miles another day. I knew that there wouldn’t be many cyclists, but I was really surprised how few cyclists there were. LA would be a great cycling city, if it wasn’t for all of the auto traffic. I did see some great bicycle murals.

In OC, the ride of choice was carbon roadbikes decorated with lycra clad riders.

I wonder how many events Boulder and Bend have at their Pedalpalooza?

Ah fixed gear bikes were so year 2000 for Portland…so it is understandable that other areas rank higher…since this region has moved onto utility bicycles, etc. 😉

Perhaps Portlandia will cover this topic with the new info.

I have started riding a fixed steer bike. Headsets are so last week!

Do you just lean that bad boy?

Maybe the fixies for sale on CL in those other locations were stolen in Portland and trucked there for resale.

I read both the Priceonomics and Freakonomics article all the way through.

I’m sorry, why does this seem so confusing for two economic bloggers?

This is a simple function of supply and demand.
Given:
(1) There is more demand here in Portland.
(2) New bikes have a higher price than used.

IF there is a lower supply of used bikes than used bikes AND demand remains steady THEN the price a seller of a used bike can charge goes up.

Freakonomics is light entertainment, not to be taken seriously.

So fixies and hipsters have a positive correlation to Californication? That explains a lot about Portland.

the messenger/fixie aesthetic is rooted in east coast origins waaay back long ago, N.Y.C. baby!

What about topography?
Portland = hilly.
Orange County = sorta flat.
Painting with a broad brush here, but it’s what came to mind.

Downtown SF is totally flat though. So where the messengers are is flat. Messengers popularized track bikes.

what is this 2006? sw8 fixxayz are for flyover states these days.

Eek. Those plots and the correlation coefficients of their model fits are pretty horrible. Not much to conclude other than the bicycle market is more complicated than they hoped it was.

What does it mean to you for people to be “Portland”?

To me, born and raised. Exception being Tom McCall.

for sale listings are a horrible indicator… using for sale stats would indicate that nobody in Portland drives a Subaru GT, but actually there are a ton of them but they’re bought so fast that they’re never easy to find for sale… so it’s possible that fixies are so popular in portland that they’re bought up before they make it into any stats… or that they’re sold offline since the bike culture here is more intimate…

The chart makes no sense. Orange County has 100 fixies per capita?

Spot on! Maybe they skipped stat’s class to go shop for skinny jeans with their mom’s credit card.

Someone said Portland is going from Track to Rack. Meaning people are moving away from fixed gears to rando or touring bikes to explore and adventure on. I can see that. And I dig it. I’m still riding fixed in this weather though.

Sweet! I’m with the hipsters and didn’t even know it. Which more likely means the trend is already over with.

… how ’bout my fender’d and racked 650b Rando bike with 3 spd. Sturmey Archer fixed hub?

I look forward to the possibility that we might reach a point in civilization where nobody pressures themselves to track major social movements and attribute them to inaccurate and/or incomplete causes. That’s when I’ll be more confident that humanity can completely stop competing with itself. [rhetorical question]What are we trying to accomplish when we express what we believe we know about what other people are doing and why we think they’re doing it?[/rhetorical question] I could answer by referencing some vague behavioral pattern such as “being weird” or “being utilitarian”, but I wouldn’t really know, especially if I had only been paying attention to the motives that a limited number of people participating were acting on. Few like being “lumped together”, but many apparently forget to stop “lumping others together”.

middle of the road guy
Reply to  Caleb

You are making it way too complex.

It’s simply a matter of finding another group of people you don’t like so you can make fun of them.

So the object lesson here is that I should:
() go to the least bike friendly city in the US
() purchase a few bulk police auctions of bikes
() package my haul for cheap slow rail transport to PDX
() repair the repairable/recycle the irreparable
() resell for an obscene profit

If these bike-hating city’s police department had any sense they’d trade auction lots with other nationwide departments to optimize the money recouped by taking advantage of skew product demand nationwide.

This is hilarious – just my kind of data to analyze. I love that they admit they tried to make fun of us and it didn’t work.

Fixed gear bikes are OVER!

If the criteria for this survey had been over-priced steel commuter bike carrying smug yuppie to their office job slowly, Portland would surely be on top.

So why were Seattle and NYC not included in this?
Who cares about Gainsville?

By my best guess is that the x-axis should be multiplied by ten to the minus 4 if those numbers mean what they say they mean.