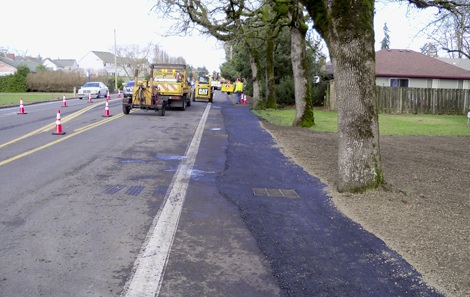 It appears as though the Oregon Department of Transportation (ODOT) may have read the story too. 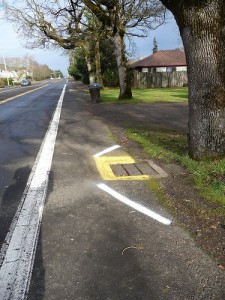 After years of sending emails to ODOT and other agencies regarding the catch basin, Parsons decided to take matters into his own hands and mark the drain with paint he purchased at a hardware store.

One week after our story ran on his fix, we received an email from ODOT’s Public Information Officer Don Hamilton explaining that crews were out repaving that section of Hall to make the basins safer for bicycle traffic.

When I stopped by to see the repairs myself, ODOT crews were finishing work and removing construction signs. Crew members I spoke with declined to comment on whether or not Parson’s actions or our story motivated the repaving, but one person on site shared the old adage, “it’s the squeaky wheel that gets the grease.”

Along with raising and repaving the two catch basins in the photo ODOT passed along, crews also ground down and repaved another catch basin and a manhole cover on the opposite side of the street.

Regardless of what caused ODOT to act, this development is sure to be welcomed by anyone who rides their bike on Hall Blvd!

I love it! Way to go, K’Tesh!
Take note that the photo above is credited to ODOT – looks like they want to make sure folks know they’ve addressed the problem.
It’s also cool that Jim’s original treatment wasn’t an amateur repair that would make a bigger problem – just a bit of highlighting.
Squeak! Squeak!

As a regular (albeit fairweather) bike commuter who comes from Durham to Hall to get to 99W and into NW PDX, I appreciate Jim’s efforts with ODOT and the city of Tigard regarding these grate issues. Even the striping ahead of the grates on Durham westbound help remind me to move left on my approach, and have kept me from diving onto them. So my thanks to Jim and also to bikeportland for reporting on stories from out here SW Washington County.

Can’t wait to check this on on my bike! Thanks K’Tesh! Thanks ODOT!

I’d like to say a BIG THANKS to ODOT for repaving this!

To whatever end, the shoulder also looks a fair bit wider.

Looks better. Let us know how it rides, because in the picture, the longitudinal division between the old and new asphalt doesn’t seem to show kind of a lip at various points along it. Maybe they weren’t quite done when the picture was taken.

Speaking of things longitudinal, I’m wondering if the engineering plan for a catch basin drain located on a street without a curb, like this one, is set to put a bit of fall into the shoulder for some distance in both directions from the catch basin.

Should be: “…the longitudinal division between the old and new asphalt seems to show kind of a lip at various points along it. If it’s substantial, it could kind of wobble a bike wheel about, messing with the the balance of people riding. …”

K’tesh is the man! (how do you say that in Klingon?)

Nice! The action is probably related to the whole “if they know about it, they’re liable for it” idea. Once this was publicized, and unapproved paint applied, too, ODOT had to do something.

Wow, sounds like we all need to stock up on some spray paint.

With the UTMOST respect to the person who had been trying to call this in for years to ODOT, I have to say, I don’t think it was citizen action that prompted ODOT to finally get off their ass and do something here, as your headline states.

I think it was getting publically shamed by BikePortland.org that did it.

But such is life these days.

I wonder if ODOT also fixed the black hole catch basin on the other side of Ashford, just north of this one.

I’m glad they got out there and fixed it, and definitely think that it was a combo of K’Tesh’s work and the bp.org story here.

Sad that it takes years of emails and pictures for no work to happen, and one story one time online to push the agency to do something, though.

(BTW, JMaus, this is in Tigard, not Beaverton as your “featured story” picture caption states.)

How can we get PBOT to do the same on NE Wheeler (which goes past the Rose Quarter) southbound bike lane in between Winning and Multnomah? There’s one big rain drain there which is about 3-4″ below grade. Given the high number of cyclists by there every week, it deserves attention.

Could you post a google map streetview url for those of us who don’t know exactly where you’re talking about?

I went to the streetview, and didn’t find a bike lane, but I did find three grates on that stretch of NE Wheeler.

The northernmost one (near the driveway)
http://g.co/maps/cdyku

The middle one (beside a pull out area)
http://g.co/maps/bxdbc

The southernmost one (at the corner of Ne Multnomah and NE Wheeler)
http://g.co/maps/gufb4

Not being familiar with the area, I’m guessing that it’s the northermost one from the images, but I can’t be certain.

Perhaps some paint, and photos are in order?