Tandems on display at Co-Motion Cycles in west Eugene
(Photos: Will Vanlue)

During my time in Eugene, in addition to seeing the city’s new cycle track, I stopped by Co-Motion Cycles for a tour of their facilities. My initial plan was to take a look at some of the interesting facts about the production of their bicycles, but I ended up also learning a bit about their approach to business. 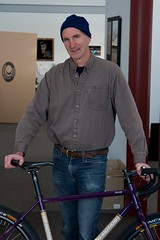 For example, they’ve been building bicycles since 1988 and have been in their current location for a little over a decade. Co-Motion produces about three to five bikes each day, approximately 75% of which are tandems (which makes them the largest tandem maker in the U.S.). But beyond just making great bikes, Co-Motion has remained healthy because of how they conduct business.

Before visiting their factory on the outskirts of Eugene, I perused their website. On a page titled Who We Are you’ll find words like “audacity”, “privilege”, and “relationship” as well as a detailed virtual tour of everything in the shop.

When I arrived, one of Co-Motion’s co-owners, Dwan Shepard, met me with the confident smile of someone who truly enjoys what they do for a living (not to mention a man who won a tough battle against cancer a few years ago). Shepard founded the company in 1988 with Dan Vrijmoet and today they employ about 15 people.

He showed me around their production facility and every employee we talked with was smiling. They all seemed as proud of their individual work as Shepard was about his business and were eager to show what they were working on. 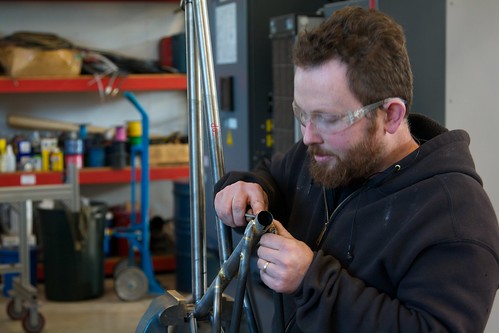 And this is Bob Westman, a.k.a. “The Brazen Hussy”… 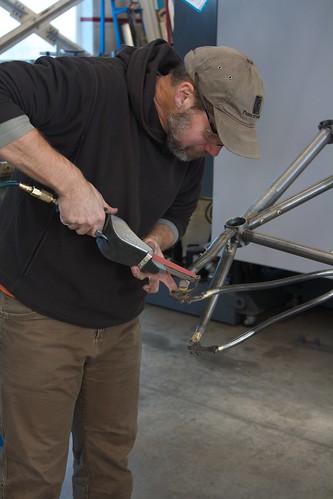 Mr. Adam Good preps a frame for the paint booth… 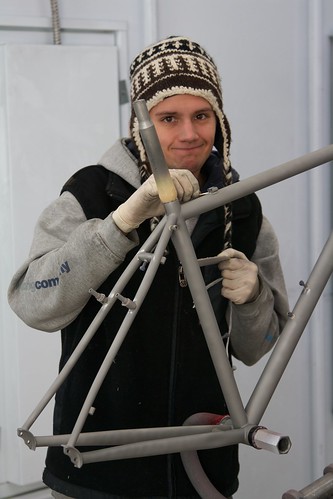 The pride Shepard and his employees take in their work and their bicycles is also apparent when you see the machinery in the shop. 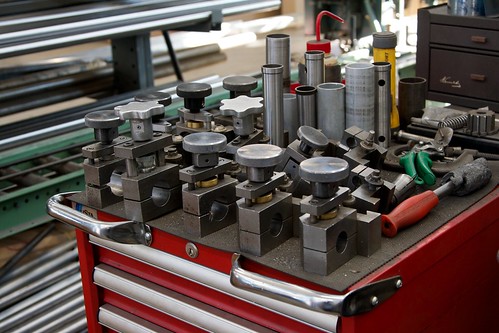 Much of it was custom built by someone at Co-Motion for a very specific application and has been in use for years. Shepard has explained that they’ve integrated some computer controlled CNC machines into the production process but only when it improves the quality of their bicycles and not simply to increase the volume of their production. 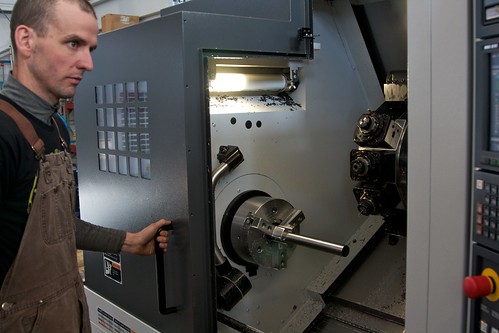 And Karl Fredricks proudly shows me a pair of dropouts, fresh out of a CNC machine… 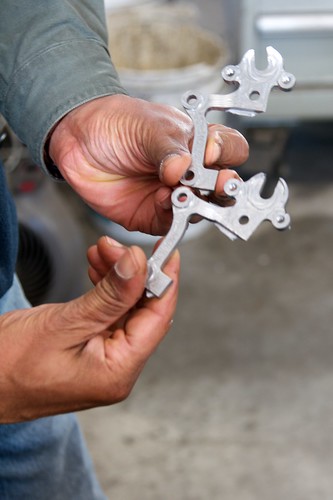 Shepard is aware that the bikes he sells aren’t the most inexpensive on the market; but he feels they’re worth every penny. He explained that, “Not everyone is going to be able to get one of our bikes but when they do they don’t regret it.”

Co-Motion also produces frames for some of Portland’s independent bicycle builders (including production models from Ahearne Cycles and Sweetpea Bicycles). Shepard says he receives many more requests for that sort of work than he can accommodate and only agrees to do it if he’s sure it won’t distract from Co-Motion’s own production. As soon as another builder’s frames are part of the family though, Shepard will look after them. “Once they’re in we make sure they’re taken care of.” 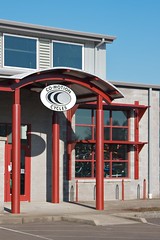 All the care, attention, and pride isn’t accidental and isn’t a simple product of altruism. Working in this way is an intentional and successful model of doing business that Co-Motion has evolved over time.

In the past, when the economy was booming, Shepard said they would pick and choose who they worked with. As the economy cooled, Co-Motion has adapted and thrived. “The last few years we’ve learned you’ve got to be nice to everybody,” Shepard explained, in a nod to the realities of today’s economy.

With recent doom-saying about U.S.-based manufacturing, it’s encouraging to see a local bike manufacturer thrive. And it may not — should not — be too surprising that the secret to success is a good, old-fashioned focus on a quality product and strong relationships with employees, suppliers, and customers.

— by Will Vanlue, will [at] bikeportland.org

don’t forget that Bike Gallery is the exclusive Portland-era source for Co-Motion bicycles!

Are they still making frames for SweetPea?

Hugh Johnson
Reply to  middle of the road guy

“Co-Motion also produces frames for some of Portland’s independent bicycle builders (including production models from Ahearne Cycles and Sweetpea Bicycles).”

middle of the road guy
Reply to  Hugh Johnson

I heard that a few years ago when I went to the handbuilt show in Richmond……I suppose I should have read all the article!

Author
Will Vanlue (Contributor)
Reply to  middle of the road guy

I think so. I saw this box during my visit.

Good to hear of another success story about an independent bike maker.

They make a few Hampsten-branded frames, too. Something else to think about–there’s a lot of Chicom-built plastic frames that sell for many $ more than Co Motion’s products. Buy Northwestern whenever you can!

Co-Motion Cycles is absolutely inspiring, as I try to run my business along similar principles of quality and relationships.
Great to be reminded that it can be done!

Thanks for the great comments, bike people! And thanks Will, for a lovely article.

I had admired Co-Motion’s bikes and business long before I had the opportunity to work closely with them. I am thrilled to have such fine craftsmen as fabrication partners for Sweetpea. And I got a smiley face on the frame box that arrived yesterday – how could I not love these guys?!

We love you right back, Natalie!