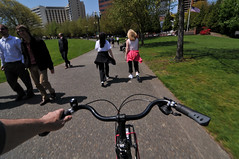 The Waterfront path is the busiest in
the entire region.
(Photo © J. Maus)

Metro has released its “2011 Trail Use Snapshot” report. The report (PDF here) is an analysis of local trail usage data complied by the National Bicycle and Pedestrian Documentation Project from 2008 to 2010.

Among the 25 multi-use paths (I prefer that term to trails) that were part of the analysis, several of them are key transportation routes for bicycling in and around Portland. In fact, the survey data (gleaned from 3,012 completed forms) makes a compelling case that paths like the Eastbank Esplanade, the Springwater on the Willamette, and the Waterfront Path are crucial bicycle transportation corridors. 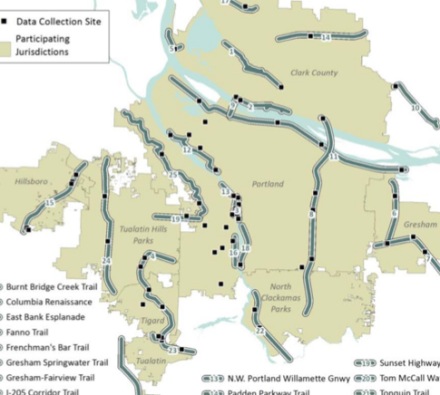 Map of trails throughout the region where usage was analyzed in the report.

While mode share on “the Intertwine” (a network of paths and natural areas and the name of an organization that works on them) is almost evenly split between bicycling (48%) and walking (50%), the two modes use the trails for completely different reasons. The graph below (from the report) shows the difference in “trip purpose”: 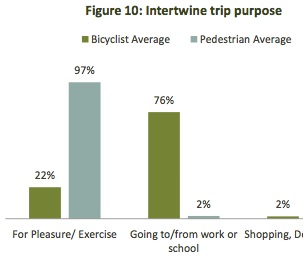 The analysis not only shows the importance of these paths as key pieces of the bicycle network; but it also might help explain why conflicts between users are so prevalent.

With most of the people bicycling on the paths using them to get to work or some other non-recreation destination; people on foot are using the trails almost exclusively for recreation. These different trip purposes naturally lead to different behaviors among users, which likely accounts for some of the tension between them.

Looking at all Intertwine users as a whole, 60 percent use the paths for recreation while 40 percent use them for transportation. “These findings support the belief that trails are transportation facilities, equal in importance to roads or highways,” writes the reports authors, “But attention must be given to their dual role as recreational amenities.”

When asked for the top factors that influenced route choice, the answer from people bicycling also reflected the transportation-oriented trip purpose: 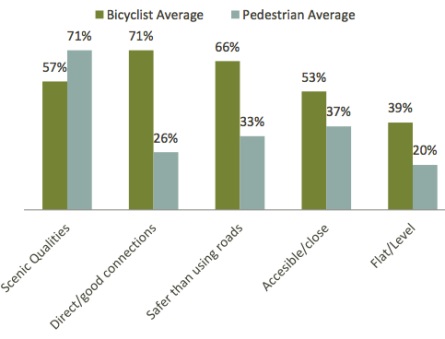 Those very high marks for “direct connection” and “safer than using roads” is just another bit of evidence that people prefer bikeways completely separated from auto traffic.

A few other key findings:

The report also has detailed snapshots of each one of the 25 trails that make up the Intertwine. Here are the stats from the Eastbank Esplanade: 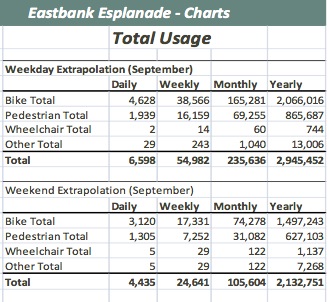 And here’s why people are bicycling on the Esplanade… 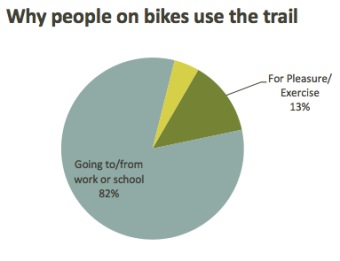 And why they’re walking.. 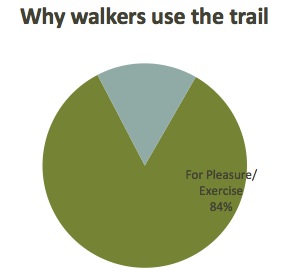 Of the top five “Intertwine trail corridors” four of them are near downtown Portland. The chart below shows their estimated annual usage split between bicycling and walking… 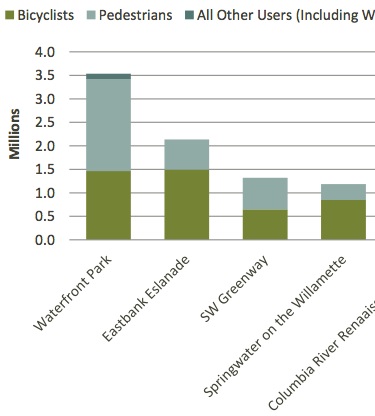 These counts are extremely valuable because they give us statistical support for making good policy and more importantly, they are used in grant applications to go after funding to build more of them.

— Learn more about the counts and download a PDF of the report here.

I don’t think you spelled out what the Intertwine is, and its a new term, at least to me.

After looking it up, its very clear theses paths are anything but intertwined. That map would be great to show to the people who insist you ride only on “bike paths.”

Great reporting. This is exactly why I get funny looks riding fast in Tom McCall at night: I’m trying to get home from work (get out at 10 or so), while all the pedestrians are either homeless or out to get some fresh air. This is also exactly why we need Sullivan’s Gulch to have a trail.

I’m curious if anyone else finds the I-205 ‘trail’ to be very badly engineered? I’ ve only used it once, and after getting lost or unsure many times trying to reconnect to it after it encountered a road crossing under I-205 I vowed to skip it and took SE 82nd home. It was much easier, more direct, and I never got lost.

It helps to have a map; it’s very well mapped (as 205), but the signage gets routinely stolen.

thanks for that map. Yeah, I sure couldn’t find the signs. But even from that map you linked to it looks like there’s some pretzels to navigate at Powell Blvd, Foster, Flavel, etc. Hmpf.

Several of the major streets (Powell, Foster) have flyovers now thanks to the MAX Green Line project. No need to pretzel.

It’s not so bad once you ride it a few times. I use it to get to/from work when I bike to the office, and when I’m out for fun rides I’ll sometimes use it to connect up different parts of my route if I’m out in east Portland.

I wouldn’t call it fun, but it’s a functional link, and rarely ever crowded.

I needed to get on the 205 MUP northbound from Gateway MAX this summer. It’s trivially easy if you know how, but I didn’t and neither did a bike rider I asked, and I didn’t find signs. There is no access to it from MAX northward to Maywood Place. Thank goodness for cell phone, Google maps and spouse. Signage was adequate the rest of the way, although it required careful observation to pick out the signs at a few junctions.

BTW, I spoke to a woman at a Sunday Parkways kiosk who is participating in the Gateway Green project, in the midst of that I-205/I-84 concrete jungle. They’re aware of the MUP access problem and seeking some improvements to it, but obstacles such as 30′ clearance over the rail line bumps up costs. I was glad to hear that things are still moving along with that project.

When I lived in Vancouver, it was easy enough to ride it into Oregon, up to Sandy Blvd or so. After that, I usually found it easier and much more direct to just stick to 102nd Ave to Stark/Washington, and then 92nd Ave south until Flavel or so.

To be perfectly honest, on a few more time-sensitive, long-distance trips, I’d just slip onto the shoulder of I-205 and make twice as good time. It’s not hard to ride between Airport Way and West Linn in under and hour’s time when you don’t have to deal with cross-traffic.

When it’s perfectly legal on Washington’s stretch of I-205, it’s an unfortunate shame that we’re relegated from 20′ of unimpeded shoulder to 12′ of a path that forces you to stop and press a button to cross half of the time you face cross-traffic.

And before you say that some people prefer paths, just look at Eugene. They’ve got paths and bike routes along and near quite a bit of their freeways, yet the shoulders remain open for those who prefer to use them.

Paths are needed, but don’t take away our roads in the name of “safety.”

Wow, riding the shoulder of I-205? You are braver than I.

Never mind that I 205 is closed to bicycles from Willamette Drive in Oregon City to WA 14 in East Vancouver.

Pedestrians, need to get a job?

Oh hell…my facetious tags were treated as HTML and ignored…damn.

Is The Intertwine what they’re calling the 40 Mile Loop these days?

Tom McCall scares the hell out of me, especially in summer when those Kerr Bikes contraptions take over the entire path. I wouldn’t take it at all if Naito weren’t such a nightmare. After five years, I still don’t know how I’m supposed to get to the Hawthorne bridge heading south.

Chris I
Reply to  Ben Waterhouse

Hang a right onto the cloverleaf that begins just before Jefferson St. It is closed to cars, but bikes can still use it.

At my previous job, we closed the office at noon on Fridays and I could count on both the Eastbank Esplanade and the Tom McCall path being flooded with pedestrians/runners of all sorts. Not that there’s anything wrong with that, and I would simply plan on biking through those areas more slowly and carefully during those times.

Going to the office in the morning, around 7am-ish, and coming home, normally around 6pm-ish, I was able to ride at a much quicker pace.

I think there’s something to be said concerning taking the time to yield to the pedestrians during “non rush-hour” hours.

Good post, and reporting, and analysis. What interests me about that map is that there are almost NO east-west corridors. As a west-sider who commutes downtown, I sure wish there were.

Thanks for the coverage Jonathan. One discrepancy…

Page 5 of the linked pdf states that “70 percent of Intertwine bicyclists are male, but
pedestrians are evenly split between the two
genders.”

I know the graph on page 10 shows 70% female, but I think they got the labels mixed since the text on page 10 also supports 70% male.

I was hoping but I suspected it was too good to be true.

Minor correction: the gender split of bike riders on the Intertwine is (according to Fig. 8 of the report) 70% male and 30% female (not the other way around).

This is great data to have. Two weeks ago I talked with a man who was counting bike and pedestrian users along the Springwater Willamette, as a volunteer helping Metro. Thanks to everyone who volunteers to collect this information!

Mighta been me. The way it was explained to me about the gender split – females are considered the “indicator species” (not my words!) as to how safe it is perceived to be bike commuting. The higher that number, the better we’re doing. I did the Springwater counts all the way out to SE 122nd. I showed 34 % females close in, tapering to only about 24 % way out east. Though 24 % is actually not bad.

-And I just love to watch all those bicycles go by, PDX is such a great place!

Ben and Richard and others. Thanks for catching that. I had the male/female mode split numbers backwards. It’s 70% female and 30% male. Fixed the post. Sorry for confusion.

Actually, 24 of the trails are multi-use, but one of the trails analyzed is supposed to be pedestrian-only: the Wildwood Trail. Nonetheless, Metro’s report indicates that 17 bikes a day are using it, or more than 6100 per year. This obviously highlights the need for better law enforcement in Forest Park. Until Parks & Rec gets this under control, bikers are going to have a hard time making a case for expansion of singletrack in the park.

Interesting data, but I wonder if the Bike Commute Challenge is throwing off the numbers, since it happens in September? Perhaps that is inflating the number of bicycle commuters relative to other user groups.

I don’t see the full Springwater corridor on these maps–is it not considered part of the system?

Nope, it’s not; only part of it is a member of the 40 Mile Loop. You’ll notice a significantly lower level of maintenance and signage east of where 40 leaves the Springwater Corridor. You can scope out the junction where 40 splits.

Captainkarma,
I was training on the Springwater the day that count occurred. I went up and down the path 7 or 8 times. In cases like that, did you count a person once or 7-8 times? Many cyclists and peds go up and down the path multiple times. Skews the data unless you can remember everyone’s face.

On the Intertwine map, the Gresham-Fairview trail and the Gresham Springwater Corridor are misidentified – they should be switched.

The maps in the linked PDF appear to be 4-dimensional, meaning that large segments of them exist only in the future. I know from experience that the Rock Creek and Westside trails have huge gaps that are drawn on the map as though they were connected.