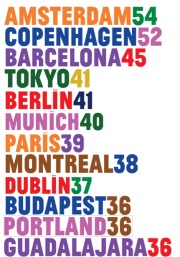 Regular readers know that I don’t usually give any attention to the myriad lists of bike-friendly cities that are published each year. However, I’ve just stumbled on a new one that I think merits attention.

Copenhagenize, the influential consulting company and blog with outspoken advocate Mikael Colville-Andersen as its CEO, has published their first-ever Copenhagenize Index of the world’s top bike friendly cities.

Portland ranks a respectable 11th on the list and is the highest ranked city in the United States with 36 points. The top three cities were Amsterdam, Copenhagen, and Barcelona.

Creators of the list acknowledge that size-wise, Portland is small potatoes when compared with the other cities. Here’s what they had to say about us:

“The smallest city to make the Top 20 list is Portland. We are aware that it doesn’t technically fit into the major cities category, but we were curious to see how the USA’s top cycling city would fare… Besides, we’ll never hear the end of it from Portlanders if we leave them out…

Investment in solid infrastructure, a broad social acceptance and good political leadership have paid off.”

The folks at Copenhagenize also had some suggested “fixes” for Portland:

For all the legendary infrastructure, and willingness to experiment, it still boggles our minds why the gender split is suffering. It’s a warning signal Portland should take seriously. Tapping into the reservoir of potential citizen cyclists who don’t want to ride with all that gear, or be a part of the various sub-cultures in the city, should be a major priority. And for God’s sake, start riding in the rain.

The cities were scored with points based on how well they performed in 13 different categories. They included strength of local advocacy groups, what type of “bicycle culture” is present, whether or not a city has a bike share program, the mode and gender splits, increase in ridership since 2006, the political atmosphere, and more.

Nice kudo to us, but I could come up with some more constructive criticism than their smarmy comments.

“And for God’s sake, start riding in the rain.” Have these guys actually [i]been[/i] here in the winter? Having had to fight for space on MAX in the dead of January, I can assure them that Portlanders already do ride in the rain.

“it still boggles our minds why the gender split is suffering” Is the gender split here any worse than either of the other two American cities on this list — New York and San Francisco? That would surprise me.

Portland doesn’t have “real” rain for the most part – the comment comes from cities that routinely see long, hard, steady rains, and the occasional all-out downpour. There’s a certain amount of truth to the comment, and there’s a serious difference between riding in the rain in 50 degree temps and in 35 degree temps. Portland doesn’t see a lot of the latter, and when it does, only the hard-core bikers are out in it.

I’d like to know what their criteria for “major cities” are. Portland proper has over 500,000 people, and about 1.8 million in the metropolitan area. That’s the same size as Dublin and 2/3 the size of Amsterdam (for the city proper – the metro area is the same size) Portland has world-class arts (including a symphony which has employed a few of the world’s best conductors over the years), world-class beer, world-class wine just outside the metro area, and while its nightlife may not compare with the largest cities in the US, it certainly compares favorably with the 2nd tier of US cities and many European ones. Portland is looked to by people all over the country and in many other countries for being progressive in planning, transportation, energy, food, and “being green”. Exactly how much more is expected before we’re a “major” city?

That pesky if-your-not-part-of-the-sub-culture-you’re-not-really-a-cyclist attitude has impeded the Portland area’s cycling growth. I understand there’s a lot of people who credit the sub-cultures with making Portland a major bike scene, but if cycling is ever going to go main stream, it has to stop being the domain of sub cultures.

That’s the thing I think you, and others critical of the various sub-cultures, might be missing.

cycling isn’t “the domain of sub cultures” in Portland. Yes, there are a lot of high-visibility sub cultures within the larger community of people who love bicycles in this town, but it’s certainly already beyond them. Ever see the am/pm commute here? A very large majority of the ppl in those streams of bike traffic I would bet are not active participants in any of the various subculture groups here.

I’ve been a daily (year round) bike commuter in Portland for years. I’m not sure whether I’m a member of a “sub-culture.” Can someone please point me to a typology of the currently accredited bicycling sub-cultures in Portland so I can determine if I’m “in” or “out”? 🙂

Being a “motorist” doesn’t imply any life style judements, so why does riding a bike have to say anything about the person’s life style?

Is there a difference between using a bike for transportation and being a “cyclist”?

amsterdam may be bike friendly (if you don’t mind throwing your bike in a pile)…it is hardly pedestrian friendly. Was there last week and crossing the road on foot (even with a green light) was taking your own life in your hands (cyclists don’t seem to want to stop for much of anything nor do they are about traffic flow or direction).
Barcelona was much better with a very strong and widely used bike-share program from all the empty share racks that I saw and riders that played by at least some of the rules.

I for one can’t wait for the rain to drive people indoors!

So what’s the big deal about rain. The Banks-Vernonia trail was a great ride on Saturday…

I agree. The rain this weekend was beautiful, I was out biking and hiking. I saw tons of people downtown walking, biking and not at all concerned about the rain. Can’t believe there were some people actually whining about it.

Did anybody else notice that cities get the most points for “Perception of Safety” by having low helmet-usage rates?

FWIW, I think this is a good metric, even if it may shortchange cities where cyclists are forced to ride on high-traffic, high-speed streets.

I have to respectfully disagree that this is a metric worth judging cities by. In the past ten years, as safety campaigns and helmet use have steadily increased in Portland, actual biking has skyrocketed (via PBOT). So there’s no reason to judge a city’s bike friendliness on this metric except as a reflection of how the author of the ranking personally feels about helmet use. Alternately, I prefer to wear a helmet on Portland roads but I wouldn’t downgrade Copenhagen’s bike friendliness simply because nobody wears a helmet. Just my opinion.

Based on the criteria, (http://copenhagenize.eu/index/criteria.html), EVERY city in the Netherlands should have ranked higher than Portland. If we limit ourselves to large, major cities, then Utrecht, Amsterdam, The Hague, and Rotterdam, should have been #1, #2, #4 and #7.

But even small cities in the Netherlands beat Portland by a mile, with 25% to 65% of all trips by bike, and equal numbers of kids, women and men. Utrecht and Groningen would both rank far above Amsterdam, in fact. http://hembrow.blogspot.com/2009/02/how-groningen-grew-to-be-worlds-number.html

Portland’s bike usage should be quantified in terms of the low gas tax the U.S. has. The countries ahead of Portland all have high gas taxes. If you saw the $8 plus price of gas here,(http://www.time.com/time/world/article/0,8599,1809900,00.html) you’d probably see a higher investment & usage in alternative modes of transportation.

Not to mention history..European cities were developed before the automobile ever existed — for newer cities like Portland that saw their greatest growth during late 20th century, the development of bike infrastructure/culture is a major reversal.

If those are the scores to the right of each city listed then we are actually tied for 10th place not in 11th place… just to be clear.

So how do we get more females into cycling?

MIddle of the Road Guy
Reply to  Josh

maybe the women can make that decision instead of some dude deciding that the rates need to be equal.

Not to be the crank, but Copenhagenize is run by a vain, divisive hack. Mikael’s TED talk was such a poorly researched and arrogant screed I can’t take anything he says seriously. I’m not saying anyone has to like safety campaigns and I, for one, do not support a helmet law for adults, but this guy is so obsessed with making safety devices look bad he just pulls phony stats out of thin air. Anyway, excuse my rant. I’ll give the list the benefit of the doubt that an intern did the research for him.

And nobody try to pull me into a helmet debate today. Too busy! Cheers!

I don’t “cycle”; my washing machine “cycles”. I Ride Bike!

do you bicycle? just wondering.

I was up in Vancouver B.C. the weekend before last for the first time in 3 years. I was very impressed by their bike infrastructure progress. If they are behind Portland it is not by much IMO and they are rapidly catching up.

I the ranking’s caveat regarding gender bias serves as great constructive criticism. Sure we’re doing great as the underdog, but are we to be lulled by the status quo? I think we can use this as a reminder to the various populations served on the road. After all, gender, among other things, isn’t often a huge priority and reflection and small action could be all it takes to get people (women) out there. My two cents? Maybe it’s the “htfu” attitude against the weather, MAX tracks, car drivers, etc.

The gender split has long been used in terms of judging whether cycling (a normal English verb) has become mainstream. A wide range of ages among cyclists would be another measure. It is not something Copenhagenize invented – Claire Morissette of Le Monde à Bicyclette here spoke of it 35 years ago.

The ranking does tend to favour larger cities or those that are the metropolis of either a sovereign state or a non-sovereign nation (Barcelona, Montréal) as beacons. In France, Strasbourg is many times more cycle-friendly than Paris, and several smaller (largely university-centred) cities in the Netherlands are more so than Amsterdam.

I happen to agree with Mikael about victim-blaming scare campaigns and their deterrent effect on mass cycling by the average Joe or Joan. (Note that all the people in the BikePortland illustration seem to be athletes riding in “gear”.

We of course are the highest-ranked city in North America (or in the Americas for that matter) and we have something a lot worse than cold rain for at least three months or so (used to be more, our season for average cyclists has become significantly longer with climate change and two years ago we had practically no winter whatsoever – unheard of a few decades ago). There is still a hell of a lot to do here though, in terms of improving our bicycle path network and other legal and physical infrastructure. I’d also like to see cycling training as part of physical ed here in schools, as is the case in the Netherlands. That means everyone knows how to ride a bike and motorists are also aware of cyclists – of course most motorists there also bicycle.