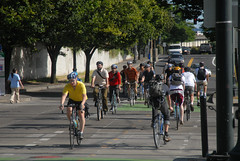 The City of Portland Bureau of Transportation released results of their 2010 bike counts today (PDF here). The counts — taken at 153 locations throughout the city — show that bike use climbed in Portland this year after a small dip in 2009. According to the report, the number of bike trips taken in 2010 is up about 8 percent over 2009. Since PBOT began these annual counts in 2000, bicycling has tripled, growing by 190 percent.

Bridge bike counts were
way up this year
after a drop in 2009.

On Portland’s four main downtown bridges with bikeways (Broadway, Steel, Burnside and Hawthorne), the 2010 counts showed a 12 percent increase — the highest number of bike trips since PBOT’s annual counts began in 2000. Bike traffic now makes up about 14 percent of all traffic on those bridges (up one percent over 2009). On an average weekday, 17,580 Portlanders cross the Willamette River via these four bridges.

Citywide, all seven districts showed ridership growth over last year. The highest gains were found in Southwest Portland and East Portland with 19 percent and 9.5 percent respectively.

Here’s a chart taken from the report that shows the increase in bike traffic from last year and from 2000-2001 at both bridge and non-bridge count locations: 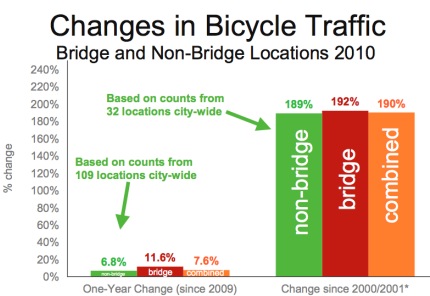 PBOT has also been measuring the rate of helmet use since the early 1990s. The number has grown from 44 percent in 1992 to 77 percent in 2010. Southwest Portland leads the way with 88 percent of the riders wearing a helmet and in East Portland, just 59 percent of riders wear one.

31 percent of riders counted were female, a figure unchanged from 2009. Here’s a neat chart from the report that I don’t think they’ve done in past years. It shows the best and worst intersections in Portland in terms of the share of female riders: 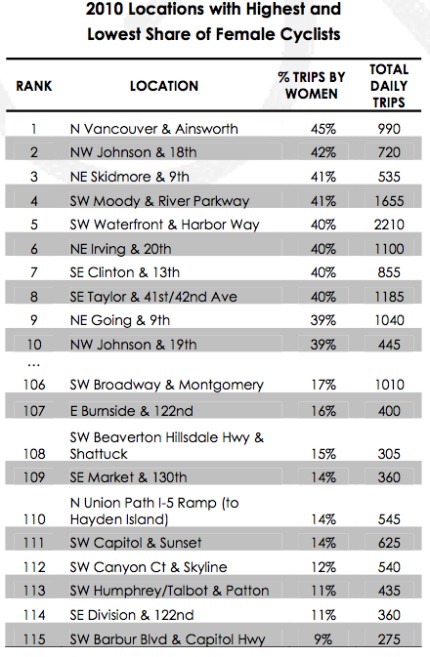 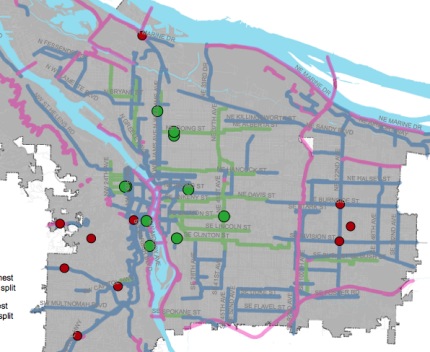 PBOT also measured the difference in bike traffic between the summer and winter months. They found that, on average, bike use in winter is about 33 percent less than summer. That being said, the amount of winter riders has increased substantially over the years. Winter counts done this year on the Hawthorne Bridge are comparable (and sometimes more than) the summer counts recorded in 2006.

Last year, PBOT offered an explanation for the first decrease in bike traffic the city has experienced since 1995. In their analysis, they wrote, “The pool of people willing to use a bicycle for transportation is almost exhausted given the appeal of the city’s current bicycle transportation infrastructure.” Now it looks like PBOT might be finally turning the corner into creating the type of infrastructure to attract new riders. After remaining relatively flat since 2002, the number of “bikeway miles” added by PBOT jumped significantly in 2010. From 2002 to 2009, PBOT added only 28 new miles of bikeways. But in the last year alone, PBOT has added 43 new bikeway miles.

PBOT counts are compiled by a mix of trained volunteers and automatic hose counts over a two-hour peak period. That number is than multiplied by five to provide an estimate of total daily bicycle traffic at each location (this is standard practice in the engineering world). The 2010 counts were done between July 20th and September 30th.

See how ridership has grown in relationship to the number of bikeway miles and read the full 2010 PBOT Bike Count Report by downloading the PDF.

— Read more about PBOT’s bike counts on their website.

Will PBOT add the Morrison to the “Four Main Portland Bicycle Bridges” next year, then?

I find it interesting that the Morrison wasn’t added this year. I don’t get the sense that it’s getting a whole lot of use, but any level of use is worth tracking, especially to see if any gains coincide with completing a better connection on the east side through the industrial district.

I thought the same thing. I can see how one might argue that for comparison with past years (when there was no Morrison Br. bike access), you have to count the same thing you counted in past years. Certainly that’s true for each individual bridge, but once you start adding up all the bridges together, then you HAVE to count the Morrison to have a valid comparison. Because what you’re counting is essentially, “how many people crossed the river between Broadway & Hawthorne.” Some of them, clearly, are doing it now via the Morrison Bridge (who in past years might’ve settled for the Burnside or Hawthorne).

Not to mention that they’re failing to capture the degree to which their efforts on the Morrison are succeeding/being used. Which makes my cynical side suspect they might be getting under-used, and hence the goal is to conceal that failure.

Steve B
Reply to  Elliot

I hope they consider counting the Morrison next year, for the same reason. The current configuration of the Morrison bridge lacks good connections to bikeways on either side of the bridge. It would be great to have a before and after count once improvements are made to attach bikeways to the Morrison.

The Morrison couldn’t be counted this year because it was completely closed to bike use for most of the year. I can’t imagine that it wouldn’t show up in next year’s report.

I was curious about the Morrison Bridge as well. Is this a tacit recognition that the whole entrance/exit area is, erm, not optimally designed? Or just the fact that it hasn’t been open a year. Also, do they have a permanent bike count thing on it yet? Haven’t ridden over the Morrison in a while, but don’t recall seeing one.

“But in the last year alone, PBOT has added 43 new bikeway miles.”

Are they counting actual miles built, or does that include projects that were announced but haven’t been worked on yet, like SE Bush?

We’ve been talking for years how “women are an indicator species” whose presence shows a high level of bike-friendliness. I think that map about gender parity at various bike count locations does a great job of illustrating that point.

RE: Morrison counts – I give a thumbs up to this idea. Here’s a start: at the last Breakfast on the Bridge (Morrison), I counted the following during a 1-hour period (8:15-9:15)…

I’m sure I missed a few. It’s hard to pour coffee, entertain guests, and keep a perfect count. Also, # of cyclists stopped was perhaps artifically high, due to a bridge lift at 9. But I think the cyclists waiting for the bridge were glad for the snack.

Of course, having a Neighborhood Greenway magically appear on the Morrison might also have enticed folks to stop and enjoy the moment.

Um… has anyone mentioned that this is AWESOME NEWS yet?

Yes this is freaking awesome!

Encouraging but highly suspect data considering that the counts were extrapolated form volunteer peak hour counts. Interesting but not worth a lot.

The bridge data is done with tubes for 24 hours, not volunteers for peak hours. As for extrapolating and volunteers fudging the numbers: Look at the general trend for the locations. And keep in mind that the same person doesn’t do the count every year, (I’ve done five different sites over the last three years.) If extrapolating and using volunteers isn’t accurate, the trends would show data that didn’t make sense. Instead they show very obvious trends that match what are shown in nearby intersections. For instance, look at N Interstate & Greeley: Having done that one, I can tell you about half the traffic goes down Greeley, and half of it continues up Interstate. Look at N Going & Greeley, it indeed confirms the “about half”, bit, but it also confirms the trend: The number of people that ride up that hill isn’t increasing. And given that it is a steep hill and there are alternative that are getting better over time, that makes sense. Look over that the numbers for N Williams and N Vancouver routes, (i.e. the alternative.) Those do show big increases year on year, and again, multiple locations along the route show that increase. It says what should be obvious to anyone: Ridership in N Portland is going up, but people don’t like to go up steep hills. Now look at the city as a whole, look at the increases shown by the human counts and compare it to the bridge counts: It is the same general trend. And you don’t have to take my word for it, look at page 10 or 11 of the pdf: 192% increase via the bridges counts since 2000/2001 and 189% increase via the human counts. Those are amazingly similar increases.

Steve B
Reply to  Matthew Denton

Great points, Matthew. I think this dataset is incredibly useful, thanks for digging in on the details here!

Matt, thanks for the clarification. My assumption was based upon the words “manual count” that appeared in PBOT’s Bicycle Report.

I love the Winter figures and example you gave

As new Portlanders start to cycle, so those who have cycled for a while become all season cyclists.