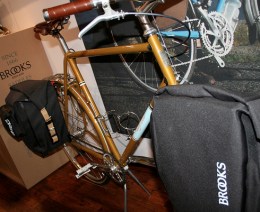 A bike made by Portland-based
Signal Cycles helps complement Brooks’
new panniers in a booth at Interbike.

— Story and photos by Carl Larson

That’s the way it feels here in Vegas.There are familiar Portland faces, brands and bikes around every corner. 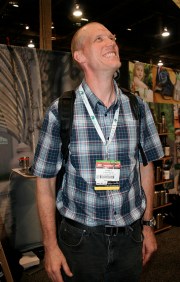 Yesterday I ran into Corey Cartwright of Seven Corners Cycles as he caught up with industry friends and associates. The day before, I ran into Marilyn Hayward of Coventry Cycle Works and Brad Davis of EcoSpeed as they grabbed what appeared to be a very well-appointed hot dog.

Companies like Rapha (the UK-based company with its North American headquarters in North Portland) and Chris King (the parts manufacturer with a factory in Northwest Portland) might not have booths (King opts for the Outdoor Demo only); but their presence is felt as their employees roam the aisles and their products bling up high-end show-goers and bikes respectively.

Similarly, Portland framebuilders might not have booths (Interbike isn’t cheap) but their work acts as display racks for some industry bigshots. Brooks, for instance, shows their new panniers on a Signal (a two-person operation run out of a small shop on N. Williams Avenue). 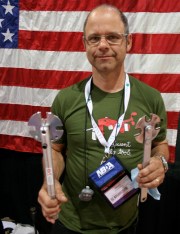 Portland-based brands like Nutcase, Adidas, Showers Pass, and Keen had bustling booths as did Co-Motion and Burley of Eugene. Meanwhile at Brett Flemming’s booth for Efficient Velo Tools, from Vancouver, WA (remember him?), I got a peek at his new Campagnolo-inspired pedal-wrench. Kleen Kanteen (who has marketing staff in Portland) hosted a meet-n-greet with Russ and Laura, the Brompton-riding couple behind the travelblog Path Less Pedaled (who lived in Portland before their current travels).

The biggest treat of the day for me was celebrating United Bicycle Institute’s 30th birthday. I was honored to share a table with people who either founded or played crucial roles in some of my favorite bike companies: Fat City, Merlin, King Cage, Calfee, Moots, Ted Wojcik…I could go on and on but it was listening to them go on and on which was very inspiring. Portland is lucky to have UBI, a respected institution with a long tradition in the bike world. 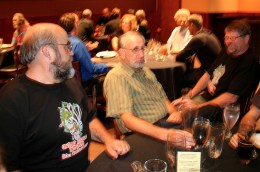 If I remember correctly there were some really cool youtube videos about squid, quite an impressive riding style!

Yeah, That video of him on Ellen doing a skid on the stage is SOOO SICK BRAH!

Portland rolls deep at ‘every’ bike event in the US…even at the Bike Summit. It can be tough on the Californians. 😉