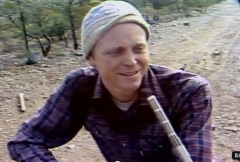 Thanks to the wonders of Twitter, I just finished watching one of the most satisfying bike video clips I have ever seen.

Uploaded last month by YouTube user frenchjr25 (a self-described “TV history fanatic”), the segment — which was created to be aired on CBS Evening Magazine — recounts the sport of “Klunking” in Marin County, California and the famous “Repack” downhill races from the late 1970s. I’ve seen photos and read books of these exploits for years, but to see video footage and to hear interviews from the likes of Charlie Kelley and Gary Fisher from this long ago was a real treat.

Fisher, who these days is a fashionable advocate who jet-sets the globe riding and watching over this Trek/Gary Fisher Collection bike line, is filmed wearing a flannel and a beanie. I was stunned at Fisher’s prescient quote at about the 3:40 mark in the segment. When asked by the reporter when he and friends started customizing their cruiser bikes, adding gears, and making them into downhill, cross-country capable mountain bikes, he replied:

“About 5 years ago… And it’s come a long way since then, and it’s going to go a long ways.”

Other highlights for me included the “I’d rather be KLUNKING” t-shirt and this line by the reporter:

“It’s important to note that klunkers are not designed only for downhill racers. In fact some riders say that the most enjoyable form of klunking is cross-country riding. They even have a saying that goes, ‘klunking is best away from the cops, the cars, and the concrete’.”

[Taken from YouTube upload page: Segments from the original Evening Magazine are brought to you courtesy the School of Multimedia Communications archive at the Academy of Art University in San Francisco and Jan Yanehiro. These video pieces are under the ownership and copyright of CBS Television.]

I think Gary digs plaid, then and now.
Cool stuff !

Very cool. What’s with the Copland soundtrack running on top of the 70’s rock and roll sountrack???

I love the Internet. That was great.

In Multnomah County, in the late sixties, we were building dirt bikes by adding gears to the old bikes we had as kids. My first fat tire bike was a JC Higgins with a front shock mounted on the fork tube. I laced my dad’s Raleigh ten speed gears onto the Higgins and it weighed 55 pounds. Used to ride all the hills around Portland on it – my favorite was the old Meadowland Dairy.
We never heard of the boys down in Marin ’til years later.

Shows how “great minds think alike” or certain ideas come ripe around the same time in totally different locales (like Newton and Leibniz with calculus). I was a 9 year old riding my Raleigh one-speed cruiser thru the trails and roots/rocks of the woods of the army base we lived on in Germany in the mid-70’s. I broke the bike. (Not claiming any genius, if I had been one i would have found an adult skilled in welding to turn my bike into something like a klunker.)

Hello Michael, any chance you have any pictures of the dairy from those days? I’d like to post anything I can get on my page about the history of the dairy: http://pnwphotoblog.com/kronenberg-orego…meadowland-dairy/

Check out the movie KLUNKERZ it covers this topic in a lot more depth. Nice to see Gary still staying in the sport and pushing the envelope. I’ve got a friend who rides for the team, and he has had nothing be great things to say about the guy.

Watching them barrel down this hill without helmets is giving me an anxiety attack.

From someone who was there:

“Yep, we called them klunkers and bombers, and used salvaged Schwinn Hollywoods, and others, the heavier the better. Eventually, we had to learn to weld because we kept breaking frames at the weld joints. Wheels were tough as they kept collapsing and the balloon tires. of the time had no real tread.
We spent a lot of time on brakes, finally figuring out that the stock coaster brakes were not the best way to go. I can’t really remember who was the first to actually one to actually try to build a custom frame. First we went to guys like Albert Isentrout to see if he would make something for us, as he had built tandems, for the first time for our club… including a triple! But, the answer was no. So either Joe Breeze, or Blackburn, or Otis Guy or charlie Kelly, all of whom were there and eventually got into business with some form of the stuff…But eventually, Gary Fisher went to his father, with me in tow, and got a big loan to start a company actually making Bombers… I really have no idea where the title mountain bike came from.
Personally, I thought it was nuts. All we ever did with them at that time was to ride the Water company trails on Mt Tamulpias and try to out run the rangers, which we mostly did. I had spent my life trying to make bikes lighter, not heavier and was still committed to road racing, and continued to do so for another 15 years… Remember, the mountain bike thing did not take off until Gary sold Fisher bikes to Trek and they started sponsoring races, and creating a culture through advertising… On the other hand, Gary’s dad literally begged me to work with Gary as he did not think his son was savvy about business. I declined, as working with Gary did not seem like a sane opportunity, and I did not do dope as was Gary’s daily regimen.
Nowadays, Gary makes his living being famous-as the originator of the sport. In fact it was Charlie Kelley who turned us all on to it, and who found the resources for the old bike frames at various junk and salvage shops he dug up. He went on to publish the Fat Tire Flier, a tabloid designed to spread the gospel of bombers. he promoted the first races, the Repac and the others, not Gary. But since Gary had a rich father, he was able to get his name on some frames and eventually sell it to Trek-who created his legend. Nice guy, but taking it was money, not innovation that made Gary Fisher.”

Sorry you didn’t ride the same trail (wave) but Gary has done some really friggin amazing stuff for the industry. Ask any one in the Marin/Fairfax area about trail advocacy and Gary’s influence is special.

The Fish for Prez!

Ken, who are you? This is your story not mine.

I appreciate that when asked about “coming up with the idea” he commented that people have probably been doing it as long as there have been bikes.

Actually, mountain biking didn’t really take off until Mike Sinyard took his Gary Fisher/Thomas Ritchey made “Mountain Bike” to Taiwan to have it replicated as the mass-produced Specialized Stumpjumper.

Nice to see Charlie Kelley getting the recognition he deserves.

Mike took it to Japan. Mike did a great job.

Actually, it was Tim Neenan (http://www.lighthousecycles.com/) who designed the first Stumpjumper. Hearsay is that he took some flak from the Marin crowd for doing so, but I’m not sure if this is true or not.

So who’s quote is that above under the heading “from someone who was there”? V??

By the way- Epic footage!

Mike bought 4 bikes from me before he made his, Tim coped my bike right down to the extra long forks I put on those bikes, witch messed up the geo. I knew Mike would copy the bike.

Probably one of the most fun days of my life, this video captured the peak of the Repack series, and ended it.

The attention generated by the broadcast made it impossible to conduct the underground event any more, and I turned to other related projects.

If you think it’s fun watching this video, think how much fun it was to be there with a microphone and camera documenting your insanity for the ages.

Yeah, no helmets. They were invented some years later.

CK is the man! Many of the best days of my life were with Mr. Repack Rider!

True! It takes more than one to change the world. Thank you Mike!

Who had the adventure we did? And who wishes they had?

Great fun to watch.
For someone who’s keenly interested in the bikes themselves, it was a bit disappointing that the film skipped over them almost entirely. I caught a glimpse of a cantilever brake, and a few thumb shifters. I gather from the next clip youtube invites us to watch, and which includes some of the same footage, that this was in 1976?

I think I spied some other notable names in that vid. Chris Chance, Tom Ritchey, Joe Breeze. Gary, who am I missing?