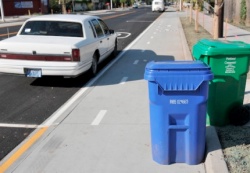 After being made aware of a problem with garbage and recycling containers being left on the Cully Blvd cycle track, the City of Portland has decided to launch an education effort to encourage residents to keep the bikeway clear of obstructions.

In a story last week, I shared the experience of Portlander Bjorn Warloe, who was frustrated with how often the debris carts are left in the bikeway on Cully.

Kevin Veaudry Casaus, the Solid Waste and Recycling Sr. Coordinator for the City of Portland’s Bureau of Planning and Sustainability, noticed that story and the discussion that ensued.

“It appears that pretty much every residence has a convenient space to set out their containers without interfering with either the cycletrack… We can… eliminate the problem with these education efforts.”
— Kevin Veaudry Casaus, City of Portland

Casaus confirmed that recycling and garbage bins are not allowed in traffic lanes, which includes the cycle track and the sidewalk. “Our administrative rules state that residents must set out their container “curbside,” which is defined as within 3 feet of the curb, or where the curb would be if none exists,” he shared.

After seeing our article, Casaus had a field enforcement staffer visit Cully. “What she saw,” he reported back, “is that it appears that pretty much every residence has a convenient space to set out their containers without interfering with either the cycletrack or the sidewalk.”

Casaus also spoke with the hauler for that area, who confirmed that many people put their containers on the cycle track. According to Casaus, “The hauler has now agreed that when they find a container on the cycle track they will place it in an allowable location after emptying it.”

In addition, the hauler will leave a note on the cart telling the resident where they can and cannot place their containers and encouraging them to call the City in if they need additional information.

Casaus feels that the issue has a lot to do with this being the first cycle track of its kind in Portland.

“I think a lot of the issue has to do with the newness of the cycle track and the overall lack of familiarity for dealing with them for most residents who think they are just making it more convenient for their garbage hauler.”

Casaus says he expects the education effort to eliminate the problem.

This is a good outcome and I’m grateful that Bjorn Warloe stepped up to do something about it and that we have City staff like Mr. Casaus who respond to bike-related concerns.

I don’t have a cycle track on my street but what was formerly the median on my front lawn between the sidewalk and the street is now one of those stormwater drainage areas that the city installed. I have no choice but to put my bins and cans in the street. I don’t like it any more than passing cyclists and drivers do. The only other alternative would be to put them in the sidewalk and that wouldn’t go over well.

The parking portion of the ROW below the curb works just fine…indeed its a better use of that portion of “the commons” than auto storage.

exactly… and the trucks can reach them easier…

there should always be a parking spot or strip of grass for cans to wait upon… not on the sidewalk, not in an auto/bike lane…

I’m seeing something a bit different in that photo: I’m seeing an emptied recycling rollcart left in the cycle track by the hauler. I have noticed this problem with my hauler over the years, with emptied rollcarts periodically left in the bikeway along Willamette Boulevard, and cyclists forced to weave into the auto lane to get around them. I’m glad the City of Portland has at least raised the issue with the haulers, too.

Yes, my hauler frequently leaves the canisters in the street, rather than above the curb where we place them. Due to the configuration of our street, this usually doesn’t cause a problem, but if it were to occur on a cycle track, that would be a problem.

(The main problem at our place is drivers parking their cars directly in front of the already-placed canisters, even though there is room to park a few feet forward or back to leave a clear path.)

by far, this is a problem caused mainly by the haulers. My cans are left on the parking strip in the a.m. and found in the street in the p.m. each and every week, all over my S.E. neighborhood.

That said, I simply ride around them.

Specifically, every time it is picked up, it is my garden waste bin that is left in the street by the hauler. The garbage and recycling drivers put those bins back on the curb where I leave them. Indeed, let’s not automatically blame the residents.

Meh. I understand the complaint, but there is plenty of room there.

It isn’t just the hauler leaving them there although that may be part of the issue. On Tuesday or Wednesday of this week (pickup day is friday) I counted 8 cans in the cycle track. Hopefully the notes will make a difference, which is all I was hoping for.

That’s a great outcome. If you’re looking at another story, I’d be curious to know what will be done with the bike lane on NE Lloyd just east of NE Grand. Tri-Met stored tracks there for the light rail construction. Now that the tracks are gone and the bike lane is reopened, there are about dozen significant depressions in the pavement resulting from the weight of the light rail tracks. I sure hope that gets fixed because it sure makes for a bumpy ride on that stretch of the bike lane.

just curious, with the cans on the grass does the truck have to drive down the cycletrack so the mechanism reach the cans to dump them?

…all the residents meticulously place their bins but the haulers just dump the trash and leave them haphazardly once they are emptied. why can’t they do the same..?

Looks like the problem isn’t solved yet, this photo was posted to the earlier story today: