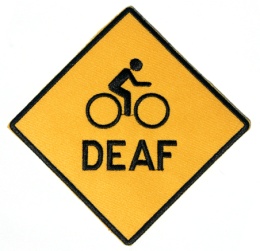 Being deaf while mixing with traffic on a bike poses unique challenges.

What if you couldn’t hear the ring of the bell or the “on your left” so many of us rely on? What if the person you were passing or riding next to was Deaf? How would know? You wouldn’t. Unless of course, they had some sort of sign to make it clear.

Portlander Carrie Brewer, 31, knows this problem intimately. She is Deaf and she loves to ride bikes. When she sustained a serious injury from a crash with another rider, Carrie was inspired to do something about it. She has launched DeafBikeSigns.com to help identify those folks in the bikeway who can’t hear you.

“It was a solution to my own problem, a simple answer to the real problem.”
— Carrie Brewer, DeafBikeSigns.com

On her website, people can choose from a catalog of embroidered patches that include words like “Deaf Cyclist” and the international symbol for bicycling and the word “Deaf.”

I asked Carrie to share a bit more about herself, what it’s like to bike without hearing, and about her inspiration for DeafBikeSigns.com.

Carrie is a northeast Portland resident who works as a web designer. In her spare time, she says, “I am also involved with a couple of organizations to help build community between Deaf and the Hearing.”

Carrie has ridden a commuter bike for years, but bought a nice road bike in 2009. That’s when she, “began to fall in love with cycling.” She’s now trying to learn as much as she can about riding; but without being able to chat with other people, it’s hard to learn the nuances of training, technique and equipment. 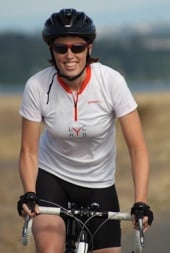 “There is a con I have always wished I could be able to do, chat with the other cyclists during a group ride. This is where you learn the massive part about the cycling sport or how to make yourself a better rider. I am never able to do that, I just humbly ride behind them and miss out all the little details.”

Carrie sees many free bicycling workshops and clinics being offered around town, but never any that come with an interpreter. “I have to work in effort to get them with interpreters in advance of weeks if I wanted to go.” Without an interpreter, she gets frustrated and doesn’t grasp what’s being said. “I have many frustrations,” she wrote, “as I want to learn as much as I can about riding.”

When Carrie does ride, she wants to enjoy the road and the experience like everyone else. One of her motivations to create DeafBikeSigns.com was that she was tired of having to constantly look over her shoulder to see if someone was coming up behind her.

“I want to focus on myself,” she shared with me via email, “worry about vehicles and the biking itself, not on the other cyclists.” Being Deaf, Carrie feels it’s her, “extra responsibility” to think of other riders and to make sure she’s not in their way.

One way to alleviate the stress of bicycling for people who are Deaf is to be in a group of other Deaf riders. One way people are connecting locally is through the Deaf Bicycle Group of Portland Facebook page.

There’s also a local group called Deaf Power Organization that does regular group rides. Carrie joined them on the Seattle to Portland (STP) ride. She notes that there are a lot of new riders who are Deaf and she’s working hard to connect with them and form even larger groups.

About the signs, Carrie says she just wants to make bicycling easier and more enjoyable for others.

“It was a solution to my own problem, a simple answer to the real problem. But then I know there are many other Deaf cyclists that face the same problems so I wanted to help them too, not just myself.”

Watch for these patches in a bikeway near you! To learn more, check out DeafBikeSigns.com.

as far as I’m concerned all people riding bikes are deaf… a lot of them actually are, by choice, due to their music player… but you should never assume somebody can hear… I only assume their vision works…

Just add “By choice” to the bottom of her logo.

nice derail. this is different from being in a car how?

On the original topic: this is cool. it’s a lot like the signage they use for areas where deaf children may be playing.

Chris I
Reply to  KJ

When you are in a car you have thousands of pounds of metal surrounding you, protecting you if a vehicle clips you from behind, for example.

woogie
Reply to  Chris I

When you are in a car you are provided with mirrors. The majority of cyclists do not use mirrors and use their hearing to determine they are being over taken by another vehicle, car or bike.

I call out on your left when passing other cyclists expecting that they can hear what I am saying. I can’t count the number of times a fellow cyclist has been startled by my passing when they can’t hear because they are wearing earphones.

A patch indicating that the cyclist in front of me is deaf is to me very useful. I know that calling out will not be heard, and that I should pass with a little more space and with more caution.

thanks again for the article! (spreading to my other fellow deaf friends)

It would be a victory for deaf riders if headphones were allowed. You could ride with headphones turned off, and no one would expect you to hear everything.

If car drivers can legally roll up the windows and turn up the audio system to 90 decibles (I say this as someone who used to do this all the time – makes it nearly impossible to hear anything outside of the car), why can’t cyclists ride with headphones?

Seems like a good idea, I used to ski with a friend who was deaf and he wore a deaf skier jersey to let people know that he wasn’t going to hear them if they were skiing near him.

Most people don’t announce themselves before passing, anyway, so being able to hear won’t help. This is exactly what mirrors are for. A mirror will help you see when a bike or car is approaching you from behind. Sometimes they sneak up on you, however.

Great idea! However, I worry it will be taken as a tongue-in-cheek joke rather than reality. It has become something of a cliche to co-opt images of road signage for advertising and other statements. I don’t see what the point of having a bike symbol attached to the word “deaf” accomplishes. Is it not clear already that someone on a bike is a bicyclist? Simply using the caution symbol and the word DEAF would accomplish the same thing and without the possibility of misconception.

Check the website. They have one that just says DEAF.

I had thoughts about something like this before. I figured if I were deaf, I could just put it in big letters on the back of my helmet. This is decidedly more elegant a solution.

It seems that most roadies seem to think I’m deaf anyway. I’ve come very close to accidentally smacking one in the face while signaling as they try to silently pass me.

98 percent of speeders overtaking me do NOT call out “on your left”. If they accidentally do, its at the very last second which often startles me, a seasoned cyclist. If yore gonna pass, give it the same three feet you expect from a car.

There aren’t three feet on the Hawthorne Bridge or many other places.

So maybe you shouldn’t pass.

So anyone going faster than you is speeding?

And these “speeders” accidently say the words “on your left”?

I’ll admit I don’t always call out, especially if I see wires coming out from the ear area, but I have never accidentally called out.

“What if you couldn’t hear the ring of the bell or the ‘on your left’ so many of us rely on?”

I’m not deaf, but I don’t hear those cues, either. Perhaps one out of every ten cyclists that passes me gives me any kind of warning.

What a great idea. Granted, many people don’t call out or ring a bell when passing but most bikes have some clunks, rattles, and squeaks to let you know they are approaching.

I think this idea is great– not just for when we’re coming up on a bicyclist, but when we encounter cyclists at intersections. That way I’d know to face the person square on when speaking to them instead of my usual keeping an eye on traffic and the signals and not really looking at the other person! 🙂

I have a mirror and use it to keep an eye out for traffic coming up behind me of all kinds. I also call out when I’m about to pass, unless the roadway is wide enough and I have a good gap to move in to for passing– giving three feet and more in passing the slower person. Then I’m acting like a car in passing on the left; I don’t expect people in cars to tell me they’re passing, I expect them to get on with the job of passing me.

A few times people I’ve passed have been plugged in to their music or whatever and don’t hear me. I smile and say hi when I’m passing, but I don’t stress about it, especially as I’m in a completely different lane at this point anyway.

bumblebee
“What if you couldn’t hear the ring of the bell or the ‘on your left’ so many of us rely on?”
I’m not deaf, but I don’t hear those cues, either. Perhaps one out of every ten cyclists that passes me gives me any kind of warning.

In light of my commute down Broadway this morning, make that one out of every twenty cyclists.

We have jersey with “DEAF” on the back pocket. Check it out at http://dvelo.com/477/order-your-new-redesigned-dvelo-jersey-now/.

Have you seen this new Garmin bike radar thing? It (I think a mirror is a better solution, but if you have a road bike with drop bars, then you probably won’t mount a mirror there – but perhaps a helmet) . Perhaps they could come up with a version with a tactile response, instead of the beep alert.