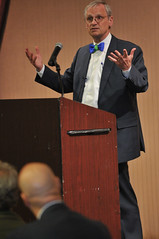 In a press conference in Washington D.C. this morning, the Congressional Livable Communities Task Force released a set of policy proposals they say will lead to “Freedom from Oil.”

The task force, which is made up of House Democrats and chaired by Congressman Earl Blumenauer (D-Portland), outlined steps on how everyone — from individuals on up to the federal government — can use less gas. The new report, Freedom From Oil: Policy Solutions From the Livable Communities Task Force, comes amid concerns about gas prices and the cost of transportation.

“In some cases these short trips can easily be replaced with bicycling, which would result in significant gasoline savings.”
— from the report

Thankfully, unlike proposals from President Obama and others, Blumenauer and his colleagues don’t shy away from the simple fact that more bicycle use and the infrastructure that makes bicycling possible should be a basic starting block to wean America of its oil addiction.

Here’s a snip from the Executive Summary:

“Providing a range of transportation choices can help break auto dependence, giving us freedom from the increasing costs and uncertainty associated with oil… As gas prices have risen, transportation costs have become unsustainable… As severely congested roadways consume our financial resources, our time, and our quality of life, Americans are demanding more and better choices in where to live and how to get around… giving residents the option to walk, bike, or take public transportation if they prefer not to drive.

… Actions as simple as combining short car trips or replacing them with walking or biking can result in significant oil savings for the nation.”

The report offers a list of 12 specific federal policies. Among them are Pay-As-You-Drive car insurance, better incentives for businesses to promote bike use, lower mortgage rates for transit-accessible homes, increased funding for Safe Routes to School and support for complete streets policies.

The 24-page report is a concise summary of many of Blumenauer’s favorite transportation policies and it makes a compelling case for how America can address — and then move away from — our over-dependence on oil.

You can download a PDF of the report from Blumenauer’s website and read more coverage of it via Streetsblog DC.

Duh. Using less gas is a great way to save gas.

But seriously, if people are waiting for an engraved invitation to step out of their cars–even for a trip to the corner store–maybe this can be it.

How interesting. Thanks for bringing this to our attention. It is curious and a bit disappointing, though, that the report’s subtitle is “How Transportation Choices Can Provide Gas Price Relief” I suppose this is a reflection of how things are packaged in Washington, D.C.

For comparison, here’s how the German federal government looks at this set of issues:
http://tinyurl.com/3rquvwp
and another study of ‘Policy measures to stimulate bicycle use in Germany’:
http://www.oecd.org/dataoecd/5/28/44579416.pdf

And here’s a study of the most advanced cycling policy in a selection of cities in Germany, Denmark and the Netherlands:
http://policy.rutgers.edu/faculty/pucher/Frontiers.pdf

Lots of inspirational ideas. Curious too how the framing of the issue is much less fuzzy, less timid in Europe. ‘Skip the car, ride your bike, save the climate.’ None of this ‘keep gas prices low’ business.

For better or worse (worse usually), everything in American politics (esp these days) is all about packaging and a “winning message.” It’s simply not politically feasible right now to tell anyone they need to change any behavior. Everything has to be framed in a positive light so as to not be seen as “social engineering” or taking away someone’s freedoms and pushing a socialist agenda…etc etc etc

A similar thing is happening locally with how PBOT frames projects that are specifically put forward to improve bicycling yet are named things like “traffic safety operations project” and are framed in a way to “maintain convenient access to parking for residents” and so on.

More good stuff from the German federal gov’t: Germany’s ‘Kopf an: Motor aus’ <> campaign to get folks to stop driving short distances and bike or walk instead.
http://www.kopf-an.de/
http://www.kopf-an.de/die-kampagne
These pages don’t appear to be translated into English unlike much of the other efforts from the federal German gov’t on this topic. But the visuals are great.
Slogans used in billboards, on shopping carts, the sides of street cars, etc.:
‘A Huge Thank You to All Cyclists in Bamberg’
‘We don’t need to reinvent the wheel, just use it more often’ (the German word for wheel and bicycle is the same)
‘Our Mission: Zero Emissions; Pedestrians and Cyclists are the urban mobility of the future’
‘Dortmund thanks Bicyclists’
‘Friday is Carfree day’
‘A nice Butt is a good sign’
and my favorite:
‘Reserved for Climate Heroes’ (on a banner hung atop one of those massive bike-parking facilities in a German city).
The last on is slide 10 of this short presentation:
http://www.oecd.org/dataoecd/5/28/44579416.pdf

And pay as you drive registration fees!

Sadly, Mad Max is the model most will choose. Fight for the last drop of gas, and go on from there.

That’s not far from the truth. Say “Mad Max” and most people will think of the 2nd movie in the series, “The Road Warrior”. “Mad Max” is the forgotten original, which shows a vision of Australia not all that far removed from today, and an eerily plausible future.

If you’ve never seen the first “Mad Max” – go rent it and check it out.

I like the lower mortgage rates for homes that are not sprawl. That means most of America will have 8% APR.

Earl’s good about not suggesting a change in behavior. He thinks that people will do the right thing if given a choice. That’s how he worked with George Bush, never suggest that illegal behavior needs an impeachment hearing. Really the duty of congress is to impeach illegal behavior, not to frame the legal alternative in a PC way.

You want to be free from oil? Go NUKE!

Greg,
nice slogan – won’t work. Germany just announced they’re quitting nukes altogether. What do they know that we seem oblivious to? Even if we wanted to run our cars on nuclear electricity, the combination of time to ramp this up, cost, & technical challenges make this a fool’s errand. Besides, have you checked uranium prices lately? They’re not making that stuff anymore either.
http://en.wikipedia.org/wiki/Peak_uranium

Germany is planning to replace their nuke generation with natural gas. Not really a winning plan, unless they use it as a way to bridge out of the old nuke designs and into the new.

We should have more hydro power. Its clean and sustainable. If only we would stop tearing down dams and build more.

Right. I suppose that is all there is to be said about that. How about http://tinyurl.com/3qcr6dn
“Solar stocks surge on news of Germany’s plan to replace nuclear”
“The news is significant for the solar industry as Germany is already the world’s greatest champion of solar technology. Though the nation is characterized by short winter days and cloudy overcast skies, it has installed more solar than any other country in the last decade.”

We are not going to be “free from oil” that is a fairy tale being strung along by Earl, told to people with good intentions but are naive to realities. I’m sure my comment will be deleted as soon as the editor reads it because this forum is only allowed to have one viewpoint, and is controlled that way.

Your opinion seems to be one of absolute defeat. You can debate how long it will be before oil runs out, but you can’t reasonably claim that it will never run out. Congressman Blumenauer — or ‘Earl’ as you apparently know him — is making a great effort to ease our society towards one that is not absolutely dependent on an extremely limited resource. Obviously we can’t stop using oil tomorrow. But if we give it our best shot, I bet we’ll be in a better position to stop using oil the next day.

You should apologize for your baseless insult to the integrity of BikePortland and it’s editor. Unless of course, you can provide some basis for your opinion. It’s also worth mentioning that this is not a forum. It’s a blog. Jonathan Maus writes and we all get to comment on his articles. If you want a news source that is entirely without bias, you’re out of luck. All news is still produced by people.

Baseless?
I often have comments removed that are not bad at all. Even giving kudos to the body shop for their safety campaign gets me deleted, no apology. dont misunderstand me though, I do like Jonothan, just have issues with his biased reporting
As far as the oil goes- we have enough for the next 200 years, by then we should have developed new technology. To stop oil production in our country and make us dependant on foreign oil is just foolish.
Earl is a fine name by the way, it was my grandfathers,

J Maus is a total kwif.

I totally agree. The comments on here are so bias and PC it makes me crazy to read them sometimes. Truth is, this country needs to stop trying to change culture by legislation. American culture is to do and buy whatever the TV ads say to.

Another fine example of goobermint wasting our money. 14.3 trillion in the hole and the band plays on. Stock up on the basics. You ARE going to need them.