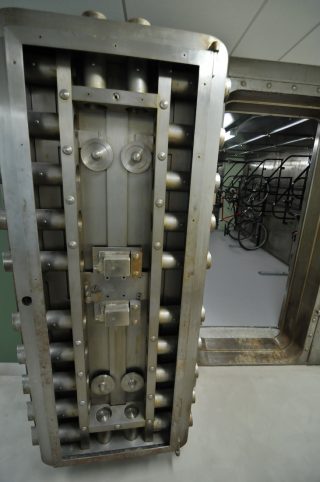 The historic Spalding Building in downtown Portland has what might be the coolest indoor bike parking in the city. Tenants of the 12-floor office building get to roll their commute vehicles into what used to be a bank vault that’s capped by an immense 16,000 pound door. Check it out…

Given its size and heft, the door doesn’t actually close; but still, this is a very nicely executed end-of-trip facility.

I got a tour of the bike parking yesterday from Tom Kilbane with Urban Renaissance Group (they manage the building). Kilbane says the new owners are taking great care with the improvements because they see the building as a long-term investment to pass down to their children. 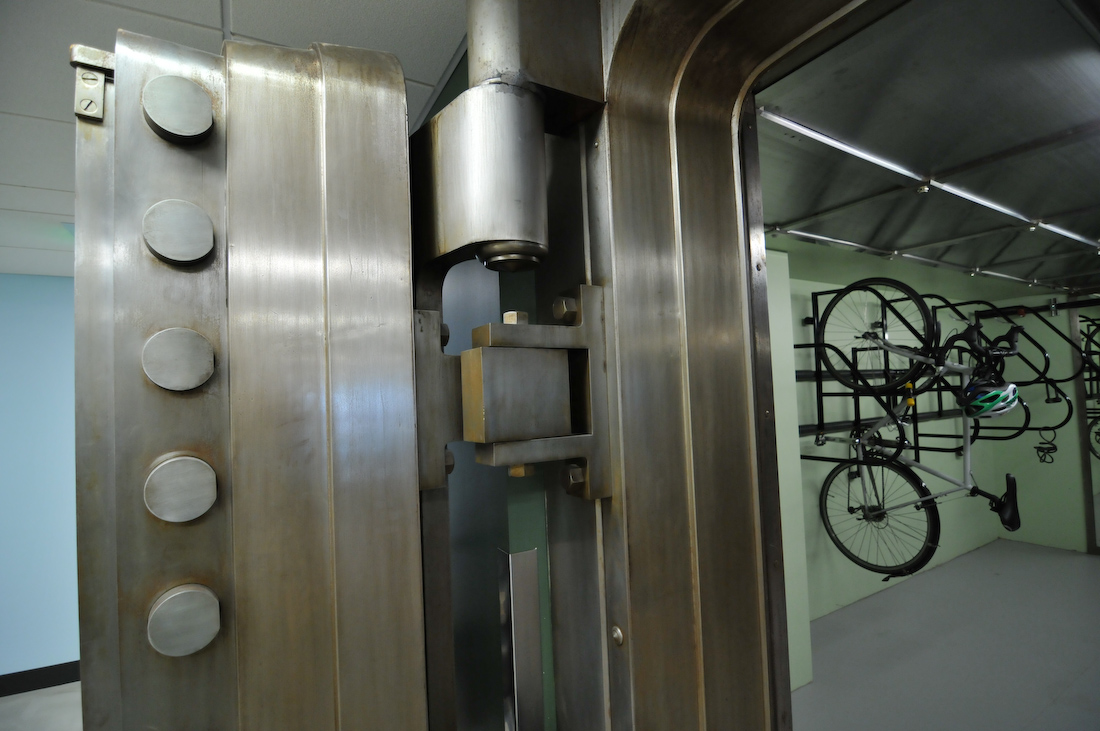 There are three former vaults in the building, two of them are used for bike parking. In addition to the imposing doors and two-foot thick walls, the bike parking vaults are monitored by video cameras. Also for its bike-riding tenants, the building also boasts lockers and large, private bathrooms and showers.

Built in 1911, the Spalding (319 SW Washington) is on the National Register of Historic Places and was formerly the Oregon Bank Building. The current renovation was done by Hennebery Eddy Architects.

It’s great to see such a classy building and high-end renovation give bicycle parking the prominence and attention it deserves.

Given the size and heft of the door, it might be a good thing that it doesn’t close 🙂

I dunno… Are you sure it’s safe enough?

Gives a whole new importance to remembering the combo.

As a messenger, I found this vault to be open to the adventurous for many years. The floor was empty and unlocked.
Have had lunch and happy hour in it many, many times.Good times with Pappa Spence.
We used to sit at the windows in that office and watch it rain while working too.

How many parking stalls per vault?

I really like that the building owners are ripping it out and are instead repurposing it.

Got hacksaw? Naaaaaaaaaaaaah. NOT in a million years.

I could see Kryptonite filming an advertisement there–not that I’ve ever seen a Kryptonite ad. Very nice.

This is just so amazing! repurposing. The vault in FNB in Salem used to close and open for lunch automatically. Would that be such a great solution to bike parking at parking lots?

I’ve worked in several buildings that had old unused vaults. They are prohibitively expensive to remove, and so they typically end up being used as storage space. I am not sure how brilliant this is, but I agree it is practical.

I don’t see how this project will “give bicycle parking the prominence and attention it deserves.” They took a space that can’t be used for an office, conference room etc. and mounted some bike racks.

Cool pictures though, and hooray for another building with good bicycle facilities.

The sign included Fitness Center. Do they have showers and lockers? If so, even better.

The fitness center consists of barbells and a basketball hoop, just like any well equipped prison yard. The vault also reminds me of entering a submarine like the USS Blueback moored at OMSI.