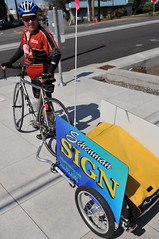 62-year old Southeast Portland resident Benn Schonman has owned Schonman Sign since 1978. A self-described “serious cyclist” for over 20 years, it’s not shocking (especially in Portland) that he eventually started doing some of his service calls by bike.

Schonman is part of a growing legion of local businesses that use bicycles to get the job done. What I think is neat about Schonman is that he doesn’t make a big deal about it. He doesn’t use a custom-made cargo bike. He doesn’t have anything “bike” in his business name. For Schonman, the bike is simply the right tool for some of his jobs.

The Schonman Sign-mobile is just a basic Burley trailer attached to his road bike; the same one he’s used for many long-distance rides and tours over the years. He adds a nice sign and off he goes. Schonman can carry about 50 pounds in tools and sign-making materials.

Sign-making isn’t the most green business out there. The majority of materials used are made from petroleum-based, non-biodegradeable corrugated plastic. For Schonman, using a bike, “Is one thing I can do to offset all that.”

Using a bike is also good for business. “People are very receptive,” Schonman says, when he talks about the bike option. “For some of my downtown customers, I’ll ask first if it’s O.K. that I’m wearing lycra in their building while I do the installation. One of them, a law office, said they’d rather I wore regular clothes; but everyone else says, ‘Of course!’… People don’t see it as strange at all in Portland.”

Another benefit the bicycle has on Schonman’s bottom line is that other bike-related businesses seek him out. He’s done signs for Pedal Bike Tours, Sugar Wheel Works, Sweetpea Bicycles, Metrofiets, and Metropolis Bike Shop.

Schonman is a great example of how easy it is for a small business to incorporate a bicycle into their operations. Way to go Benn! Next time I need a sign, I know who to call.

Benn also has the best prices in town. He beat out other bids for the windows at our shop by over 40%!

Benn has done all our signage, he’s got the right prices, does great work and he does it all in tights!

Benn is also one of the behind-the-scenes heros of our bike community. He’s put in hundreds of hours as a volunteer event organizer and I have been the beneficiary of that work many times. I’m glad to see him getting some well-deserved PR for his business, perhaps we can pay him back for all he’s done in the community by supporting his business.

Not only did Benn do a great job with our signs, the best part of working with Benn was how much pride he took in a job well done. Can’t sing his praises enough!