On eve of Summit, a look back at Oregon’s bike bill 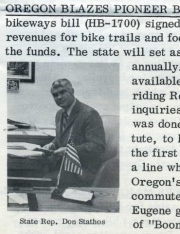 As many of you head to Salem for the Oregon Active Transportation Summit (it begins tomorrow!), I thought it’d be fun to take a step back in our history.

40 years ago, on June 19th 1971, dozens of Portlanders got on their bikes and rode to Salem for the signing of HB 1700, the Bicycle Bill. Passed by Southern Oregon lawmaker Don Stathos (who passed away in 2005), the bill was the first in the nation to mandate that highway funds get spent on bikeways.

Local citizen activist Ted Buehler recently came across an old news clipping from the time of the bill’s passage. The article below appeared in the December 1971 issue of Boom in Bikeways, the “Newsletter of the Bikeways explosion” published by the Bicycle Institute of America.

Thanks to the Frank Child Collection at UC Davis for this clipping.
– Click to enlarge –

And here’s the text (emphasis mine):

Oregon Blazes Pioneer Bike Trails Program — Encouraged by the stunning success of its bikeways bill (HB-1700) signed by Oregon’s Governor Tom McCall, setting aside 1% of state gas tax revenues for bike trails and footpaths, the Oregon Highway Division is expediting programs to utilize the funds. The state will set aside an estimated $922,000, cities $150,000 and counties $250,000 annually. With federal matching funds, as much as $2.5 million a year will be available.

Principal sponsor of the bill was State Rep. Don Stathos, a bike-riding Republican, who has hired additional secretarial help to handle 500 inquiries from cyclists around the nation to find out how it was done. He is working on a handbook to be distributed by the Bicycle Institute, to help them get their own legislators to adopt a bike bill.

“I want to see the first city with the guts to take the parking off one side of the street, paint a line where the cars were. Then I’ll believe we’re in the ball game,” he said. Oregon’s first trail utilizing the funds will be six miles long following a defunct commuter rail line in south metropolitan Portland. A one-mile trail near Eugene gets underway this year.

I see very little in the ATC agenda regarding Active Transportation’s role in economic development. This should be Topic One in Salem.

Are are some themes on the subject that participants may want to discuss with their legislators:
Reduing SOVs in the peak hours is the most cost effective way for moving freight.
Our most extensive “commute option incentive” is free parking offered in all industrial/employment areas of the region outside the Portland Central City. We give away valuable industrial land.
Trip Not Taken…living close to where you work can be an important element in community economic development…bringing customers to local business and connecting community members to good jobs.
“import replacement”…fueling people instead of motor vehicles, replacing imported oil with local food. Read Jane Jacobs’ “Cities and the Wealth of Nations.
the Portland/Oregon brand…a key role in growing the traded sector; don’t compromise your brand with ill conceived projects like the CRC.
Education/innovation are the economic drivers in the 21st century, not transportation…making the right public investments to support a world class university system, not a last century freeway.

See you all in Salem

Great stuff! I love reading this sort of bike policy history since it was what laid the groundwork for things to come.

Wonder what the six mile trail in south Portland that Don Stathos is referring to?

I’m curious to know more about “bike-riding Republican” Don Stathos? What were his motives? What was his vision for biking in the state. This was before the big Arab oil embargo of 1972 that started the 1970s bike boom. Seems like another example of how the Oregon political dynamic was way different back then.

Has it really been 40 years? When we backed that bill, we thought downtown Portland would be a no car zone by now. I thought people wouldn’t pay $2 for fuel.

When will cars be banned from Portland? Roads were safer for bikes back in ’71.

The Stathos Team also made a documentary film on “How to pass your own bike bill” 17 minutes. Read all about it at

I’d love to see a screening of this film — does anyone know any oldtimers or descendants of Mr. Stathos that might have a copy of it in their attic?

I think it’s high time we passed Bicycle Bill rev. 2 — 2% of all highway funds are to be used for bikes and peds.

40 years at 1% was long enough to demonstrate that the concept works, wasn’t it?

Where’s that movie? We need a fresh jolt of instruction and motivation in Salem.