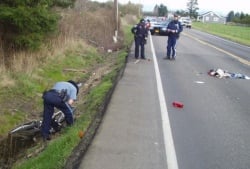 The Oregon State Police continue their investigation this morning into a hit and run crash that occurred yesterday about 3:30 pm.

According to the OSP, 67-year old Thomas Mossman was riding his bike westbound on Highway 211 (just west of Palmer Road, map) when he was struck by a motor vehicle. The OSP say Mossman was reportedly riding to a friend’s house that was on the south side of the highway about 50 yards from the crash scene. He was flown to OHSU and remains in intensive care with critical injuries.

The vehicle that struck Mossman fled the scene, continuing westbound on Hwy 211. Based on car parts found at the crash scene, the OSP have narrowed their search and now believe the vehicle is likely a sliver-gray colored 1995 Dodge Caravan similar to the one in the photo below (provided by OSP)… 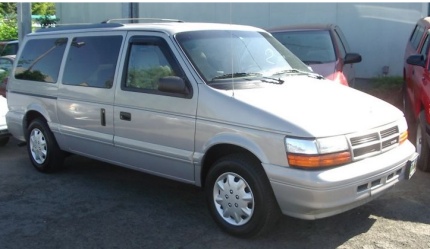 The vehicle is likely to have right front headlight damage and a missing passenger side mirror. OSP is asking anyone with information regarding the crash or the involved vehicle to call OSP Northern Command Center dispatch at 800-452-7888.

Whenever I drive or take the max I am driven to fury by the number of people that drive along wandering back and forth into the bike lane/across the fog line whenever there are no bikes present.

Force of habit. If you keep it between the lines, even when you don’t see the person on the bike you’re still not going to hit them.

The only time I EVER hear of police pulling people over for crossing the fog line is when they think they’re going to get a DUII arrest. It’s time to start ticketing folks who can’t keep their rigs in their lane.

The crash took place in the middle of the afternoon and the location was a straight road with a wide shoulder and clear visibility.

This should be a safe time and place to ride……

My thoughts go out to the victIm and family, and harsh vibes to the criminal who ran down the cyclist.

KGW reported that both the bicyclist and the vehicle that struck him, from behind, were westbound. Doesn’t seem like he was riding against the flow, but he might have been preparing to make a left turn, so he could have been (legally) in the lane.

Is it me or have there been a WHOLE LOT of hit-and-runs in Portland metro in the last six months or so? Society as a whole seems less and less to want to own up to their personal screw-ups…

But seriously, it does indeed seem like society is sinking more and more into a mindset of looking out for Number One, as my dad used to say. That coin has two sides: the obverse is not taking responsibility for your actions (attempting to get away with bad behavior); the reverse is blaming victims for not being visible or watching out enough.

Speedy recovery to Mr. Mossman, and a speedy trial for the cowardly perpetrator of this hit-and-run.

Nick,
It’s not just you!! I too think there’s been a HUGE
number of hit and run, or hit and “I didn’t see them
because I was texting and looking for my dog in the backseat”. Seems like about one a week lately although not sure of the exact no.
I hope for a speedy and complete recovery for Mr.
Mossman.

Not just in OR but all over the place, about 75% (guesstimate) of the stories I get for my blog are of the hit-and-run variety. Some days they are all hit-and-run. People are learning that if they leave the scene they only have a 50-50 chance of getting caught, and if caught they only have a 50-50 chance of getting prosecuted because of lack of evidence. So right off the bat you only have a 1 in 4 chance of even being prosecuted if you leave the scene. Now if you’re DUI and you leave the scene long enough to detox then you’re golden because even the harshest sentence for hit-and-run is nothing compared to what you get for hitting someone while DUI. And if they can’t get a blood sample or breath test within 4 hours of the wreck the test can’t be used in court except in very rare circumstances. So, Hells Yeah, if you hit someone not in a car, leave the scene. The odds are in your favor if you do, squared if you’re DUI.

Can’t people manage to simply drive cars without running things over, like… people? It seems like it should be simple enough…

I saw at least 6 people texting while driving yesterday. It’s getting dangerous to be a cyclists or pedestrian. Also, I’ve become a fan of BRIGHT riding gear, you should use every tool available to you to be safe, that includes a mirror!

I grabbed a Third Eye mirror from REI that fits on the end of your handlebar. It’s nice, but I wish I’d put that money towards one that attaches to the brim of my helmet, a little easier to manage and wouldn’t have to adjust it everytime I changed position on my drop bars!

I’ve become much more concerned about safety while cycling, reading this site and experiences I’ve had while biking on the far east of Portland have opened my eyes.

Lets get obvious out of the way:
rage, rage, rage,
all drivers are bad,
destroy all autos.

I’m thankful and oddly still impressed that US police forces are able to maintain and quickly access a body of knowledge that can tell them from small fragments what vehicle fled the scene of a collision.

I’m also continually exasperated that the same species, homo sapiens, that has made so many technological, sociological and educational advances from basic savanna existence tens of thousands of years continues to act like a herd animal.

Depressingly, we’ve come to accept that some people will insist on their right not to think, not to be accountable for the consequences of their non-thinking actions and then fight most intensely at any organized attempted to guide their non-thought process in a way that harms less of their fellow citizens.

There are not many cell towers out there. Get the ping records, and then get the phone and text message records. My guess is that the car driver was texting. Knowing the time, there would be very little work to visit those 3 drivers and check their cars for damage or new body work.

If you are driving and hit a cyclist, pedestrian, or anything else for that matter, 9 times out of 10 your best bet is to leave the scene. Any lawyer or DA practiced in these matters will tell you that over a beer or two.

As a cyclist about all you can do is use a robust rear pointed recording video camera. Front/side collisions are much more frequent, but they’re probably your own fault, so don’t bother recording anything but what’s behind you.