[Publisher’s note: The report below was written by Carolyn Szczepanski, communications coordinator at the Alliance for Biking and Walking. It was published on their blog this morning and we’ve re-posted it below with Ms. Szczepanski’s permission. The story has been edited for brevity. — JM] 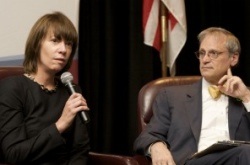 Wearing his signature bow tie and Velcro strap around his pant leg, Congressman Earl Blumenauer arced his arms over his head and brought his palms together as if beginning a yoga workshop, not a plenary address. Looking out at the more than 700 bicycle advocates gathered at the Grand Hyatt in Washington, DC, the Democrat from Oregon barely cracked a smile as he asked the crowd to repeat after him.

Never before could you visit two adjacent offices, occupied by equally sincere and intelligent people, and encounter such wildly different worldviews.

“How many people are stuck in traffic right now to ride a stationary bike in a health club?”

To the general public that might sound like a daily annoyance. To the attendees of the National Bike Summit, it sounded sadly ridiculous.

To fire us up yesterday, the League went to their go-to guy. Second only to former Congressman Jim Oberstar, Blumenauer is the foremost voice for bicycling on Capitol Hill. He set the tone for our Congressional visits by noting the historic moment. Never before has Congress been so hotly divided, Blumenauer said. Never before could you visit two adjacent offices, occupied by equally sincere and intelligent people, and encounter such wildly different worldviews.

Luckily, he said, bicycling can bridge the deep and wide philosophical divide.

“It’s something that speaks to every single item on the front page of our newspapers: Oil instability in the Middle East, health problems, congestion,” he said. “Everybody on a bike is somebody who is not in front of you in a car, competing for a parking space.”

Making the shift from an expensive transportation system built around the automobile to a more efficient network that accommodates all users may be good logic, but it’s also a leap of thought. “The pivot point is not easy,” Blumenauer acknowledged. “We have habits and politics and mindsets that are entrenched.”

The second speaker, another rock star of the transportation movement, kept those wheels spinning. Janette Sadik-Khan, the Commissioner of the New York City Department of Transportation, has plenty to brag about. She’s been the catalyst for a massive increase in dedicated infrastructure (a 250-mile bump in bike lanes) and, not surprising, a rapid rise in bicycling mode share (a 28 percent increase in 2009 alone) as folks of all ages now have safe, comfortable alternatives to the automobile gridlock in the Big Apple. But Sadik-Khan took the opportunity to boast about the efforts of advocates in other communities, flipping through a slideshow of smiling cyclists cruising down green painted bike lanes in cities across the country.

“You can see the kinds of progress all of you are making on some of the most famous streets in the country. You see this on Pennsylvania Avenue, an incredibly historic symbol. You see this on Broadway in my town, on Market Street in San Francisco, on Commonwealth Avenue in Boston, on Spruce Street in Philadelphia, on Milwaukee Avenue in Chicago and pretty much every street in Portland… The movement is there, the projects are there, and none of this was there just five years ago. All across the country we’ve seen tremendous breakthroughs thanks to everybody here in this room. It’s hard painstaking work, and I have a little feeling what that pain is all about. There are setbacks and disappointments, but that’s to be expected when you’re in the business of change.”

“To see what you’ve done in the past five years gives me so much hope for what we’ll do in the next five years… I think it’s unstoppable.”
— Janette Sadik-Khan

Thanks to Sadik-Khan’s vision, that change is measurable in New York City. Separated bike lanes — even the controversial project in Prospect Park West — have been shown to reduce travel speeds and cut traffic fatalities. “When we put down a painted bike lane, there’s a 50-percent reduction in fatalities for all users of that street: cyclists, pedestrians, and motorists,” she pointed out. “So when you put these bike lanes down, you are improving the safety of everyone that uses that street.”

Because of those impacts, Sadik-Khan has become an inspiration for many. But she turned that appreciation and awe right back on the Bike Summit audience. “To see what you’ve done in the past five years gives me so much hope for what we’ll do in the next five years,” she said. “I think it’s unstoppable.”

Blumenauer agreed. “This wave is cresting and I think we’ll be astounded about what happens over the next two to three years,” he said. “What’s driven at the local level, to me, is the tide that cannot be stopped… That tide is coming in in a way that will be transformational and, five years from now, this Bike Summit will barely be able to recognize how much progress we’ve made.”

I am so with the sentimate of this post and those at the bike summit. As an early career transportation professional, I can’t wait to make this my daily work. Unfortunately San Diego is still on the back side of that wave and I’m planning for automobility rather than active mobility. But some day we’ll be on the wave fully too. As JSK said, it’s “Unstoppable”.

Ms. Sadik-Khan is one of my heroes, but, unfortunately, she isn’t as well received as the story makes out.
Here is what Queens Democrat Anthony Weiner (which shows even liberals aren’t very progressive where driving is concerned) said in a recent New York Times story about her: “When I become mayor, you know what I’m going to spend my first year doing?” Mr. Weiner said to Mr. Bloomberg, as tablemates listened. “I’m going to have a bunch of ribbon-cuttings tearing out your [expletive] bike lanes.”
The story went on to describe so much opposition to her and her bicycling advocacy that I fear she won’t be in her position much longer. If that should happen and I hope it doesn’t, perhaps she could come here and kick some B/D-OT butt.
Apparently, she has a brusque manner and has yelled on the phone (OMG! — as if other public figures there don’t). The story said, “Sharp elbows and strong words are nothing new in city government, and some have wondered whether the backlash against Ms. Sadik-Khan has become unusually ferocious and personal in part because she is a woman….” No shi*.

I’d have included a link to the story but people may have to be a subscriber to read the whole article. It was in the March 4th NY Times.

I’m a huge fan of Janette Sadik-Khan. Here’s the article 007 was talking about:

Mr. Weiner should be ashamed. I hope that comment ruined his chances of ever advancing.