How much is a human life worth?

Unfortunately on this site, we sometimes deal with fatal and very serious crashes. Have you ever stopped to consider the financial and economic impact of those tragedies? The Portland Bureau of Transportation has. In fact, it’s common for government agencies to ascribe a value to human life to justify investments and policies.

Last week, a reader passed along an interesting article in the New York Times about how the monetary value of human life is used by federal agencies. The EPA puts it at $9.1 million, the FDA says its $7.9 million, and it’s $6 million at the DOT.

A few years ago, I recall Portland Mayor Sam Adams used a similar tactic when making a presentation about his Safe, Sound and Green transportation funding initiative. More recently, you might have seen the slide below presented by Adams (who, as PBOT manager, says safety is his number one priority) at the recent Transportation Safety Summit (yellow highlight is mine)… 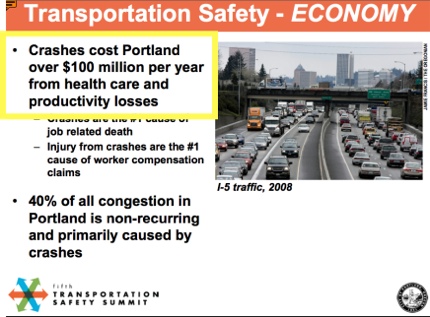 Curious, I contacted PBOT recently to ask if they use a standard, monetary amount when calculating the financial impact of fatal and serious injury traffic crashes on our city. Greg Raisman is one of PBOT’s chief traffic safety experts. He says they use metrics from the National Safety Council, a widely respected organization chartered by the U.S. Congress.

The NSC tabulates two types of costs related to traffic injuries. Here’s how Raisman says he defines them:

Comprehensive Costs of Traffic Injuries: In addition to the economic cost components listed above, the following comprehensive costs also include a measure of the value of lost quality of life which was obtained through empirical studies of what people actually pay to reduce their safety and health risks.

So, what does all this have to do with bike safety? Well, as bike ridership has skyrocketed over the last decade in Portland, vehicle crashes (of all types) have come down. Last month we reported that in 2010 Portland experienced their lowest amount of fatal traffic crashes since 1925. 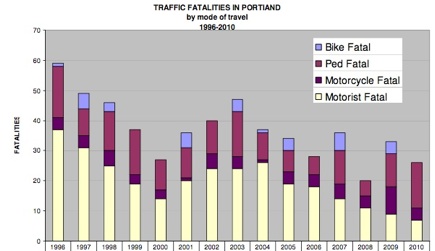 PBOT chart shows traffic fatalities in Portland by mode between 1996 and 2010.
– Download larger image (with additional data) as a PDF –

Fewer people driving cars means fewer people are dying and being seriously injured; and it means Portland experiences less of the negative economic impact of those crashes.

Here’s a chart that lays it all out:

Many people equate unfettered automobile access to roadways with economic success, but we also know that the more we drive, the more crashes we suffer. What these numbers show is that those crashes have a significant economic impact. If we truly care about the bottom line, we’ll make sure our transportation system is just as safe as it is efficient — for all types of road users.

Saying that traffic injuries/fatalities decreased as bike ridership increased is totally disingenuous. Do you have proof of a causal relationship? Pirates decreased while global warming has increased. That doesn’t mean that the decrease of pirates CAUSED global warming.

I’m stating facts that have occurred. I’m not implying they are related or that there’s a causal relationship. You can draw whatever conclusions you want. Thanks.

Did I miss it? Again?
Reply to  Jonathan Maus (Publisher/Editor)

“Fewer people driving cars means fewer people are dying and being seriously injured; and it means Portland experiences less of the negative economic impact of those crashes.”
This sounds like a relationship and a conlclusion to me. and I question this assertion because there seems to be incomplete data.
2009 and 2010 was a more deadly period than 2007 and 2008 (by over 5%) but we do not have the “Cost to society” for that period.
Shouldn’t we know the numbers before we state “the facts”?

Everything was better in the good old days
Back in simpler times nothing was ever wrong, no one was harmed and every thing was simply good.
————————————————————
This has been your moment of sarcasm.

but srsly, that was funny 😉

I was going for false assumptions of older generations when supplanted by the young.
Far too often the aged excuse destructive behaviors as “tradition”. This smacks of a fear of change and desire not to have to think about “bad things”.
These “honored elders” are the first to ascribe all of societies ills to the “whippersnappers” forgetting that problems existed when they were young, were created by them and proceeded them.

My favorite is when some one claims that all the kids are sexually loose these days and “we weren’t liket that back in my day!” I just have to remind them that phrases like “a roll in the hay” or “out behind the barn” weren’t invented by the computer generation.

not to interject, but we must realize that Mr. Maus is a journalist. it is not his job to draw conclusions, just to report facts. I hope this clears up your confusion, but, somehow, I doubt it will.

Nice use of Raisman’s statistics. Greg has made a presentation on these numbers at numerous locations in the last month, including the Northeast Neighborhood Coalition Traffic Safety event. I don’t think the effect can be understated – the roads ARE getting safer, and we’re making progress while getting more cyclists on the streets.

Traffic accidents nationally are noticeably down over that time period as well. Just want to make sure we’re comparing apples to apples and not just patting ourselves on the back

Did I miss it? Again?
Reply to  kgb

Agreed. I am not aware of any pirates (private or state-sponsored) in existance before the last ice age.
Using this line of logic one could argue that global warming caused (is responsible for) pirates.

Armed UAVs on 24/7 holding pattern off coast of troubled waters.
Naval ships standing off over the horizon (disturbingly close: 20-40km).
Any vessel can call out on an emergency frequency with their location and brief description of aggressor vessel (comm relayed by UAV).
Communication is attempted with pirates followed by a warning shot between aggressor and potential victim.
Failure to comply with orders incurs fire for effect.

Strictly anecdotal, but I would not be surprised if increased bike ridership could be statistically linked to decreased traffic deaths & injuries. As we have seen in Portland, as bike ridership increases, so does the demand for, and supply of, bike infrastructure. Much of this infrastructure serves to calm auto traffic. Making drivers more aware of the presence of bikes theoretically makes most of them more cautious drivers – another way those who don’t ride still reap the benefits. I’d love to see a study exploring whether this is actually true.
I’d also love to see 82nd avenue reduced to one auto lane each direction, with the second lane given over to separated bike lanes, and trees planted in the center, etc. Then you would see Portland’s crash rate come down.

Your idea for 82nd reminds me of Jonathan’s comment on seeing the location of the recent TV Highway fatal. To the effect that it was too bad that type of road even exists. I agree. Our 4+ lane, total access, signal-controlled auto malls are the worst of the auto legacy. There may be a place for freeways in America, but trying to ascribe more of their attributes to local collectors and throughways has made urban America more dangerous and much less pleasant to live in.

I’ve done some research on this in the past, and the general consensus is that as cycling increases, the collision *rates* for these modes go down (the reasons for this are still being debated, but infrastructure is part of it), but this is offset by the fact that there are more cyclists now at risk. How these factors actually balance out depends on a lot of time- and place-specific factors, but in a lot of places that have been studied the net result seems to be that the total actual number of fatal and serious injury collisions each year remains roughly the same.

So from a personal risk standpoint, this is really good – lower individual risk on each ride. From a public health standpoint this is not so good, since lives are not actually being saved. (Of course, it’s complicated by the fact that more cyclists generally = fewer drivers, and potentially fewer auto collisions as well.)

In the 70s, Ford Motor Company did an extensive cost-benefit analysis for the Pinto, which had an unfortunate tendency to explode on rear impact. Their beancounters determined that a human life was worth $200,000 and thus did not justify the $11 per car cost to prevent the problem.

If I remember right, in the Pinto class action suit Ford fought to keep this report confidential, but once it was released it was a key piece of the huge punitive judgement against them.

In a sense I think your headline is off-base, because the Mayor and the others who use these stats put them in terms of lost productivity and medical costs, sidestepping the issue of the actual dollar value of the life itself. Presumably this would be a little more palatable to a jury.

Within a month or so, a new paper will be released by Norman Garrick (UCONN) and Wesley Marshall (University of Colorado – Denver) called “Evidence on Why Bike-Friendly Cities are Safer for All Road Users”. It compares fatality trends in 25 comparably sized cities in California. Similar to Portland’s trends, the more multi-modal cities have fatality rates that are many fold lower than the more auto dominated cities.

today near 5th taxi driver reading a map. what a crazy day sometimes in PDX, but i love riding there. 🙂

Today you win the internet.

Cars may be “more safer” to whoever’s driving them, but they’re sure not safer for the rest of us.

I knew it, we are worth more dead than alive. next time some idiot honks and me and I ask them to “step out of their car” – they had better. I am tired of being nice while idiots accidently try to kill us.

we can only win this war at the ballot box. We, the people, need some real folks to step up and take over the city council. Mayor Adams is a fake cyclist, at best.

Imagine how safe it would be if everyone rode a bike…