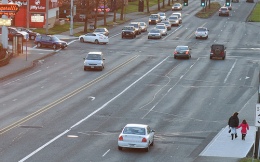 UPDATE: This bill no longer exists in the form reported below. I’ve heard from Rep. Cannon’s office that HB 3150 will get the “gut and stuff” treatment; which means the language will be significantly altered. The new plan is to make HB 3150 a companion bill to Senate Bill 344, the bill PBOT is pushing for to get authority to lower speed limits on residential streets. I’ll post clean update in separate post in a few minutes.

HB 3150, the bill that would give cities with a minimum population of 100,000 the authority to designate speed limits on state highways, is slated for a public hearing on February 25th.

This bill is being watched closely by traffic safety advocates because high-speed, state-managed highways and arterials are where the vast majority of serious injury and fatal crashes take place. Unfortunately, many neighborhoods throughout Oregon held hostage by these large streets and local jurisdictions have few tools to deal with them because the streets are owned and managed by the Oregon Department of Transportation (ODOT).

The hearing is with the House Committee on Transportation and Economic Development and meets at the State Capitol (900 Court Street NE) in Hearing Room D at 1:00pm.

This bill is similar to a bill being worked on by PBOT that would allow cities to lower speed limits on some residential streets.

I like this, but wonder what the rationale is behind having a cutoff of 100,000 people? Is there a structural difference in larger cities that makes this more useful there? All of our towns and cities are below this threshold except for Salem, Eugene and Portland.
http://web.oregon.com/towns/population_alpha.cfm

The senate version of the bill SB 344 does not contain the minimum population provision. I think the idea behind it may have been that there was concern that rural areas might push back and since Portland was asking for this they were trying to increase the chances of it passing, however I hope that at the very least they will drop the number significantly so places like Corvallis could gain more local control.

Jonathan, I had been told that the date for the hearing had been moved back and that it would occur sometime in the week of the 28th, but I might be wrong.

Or Beaverton, which could hardly considered to be a rural town.

If Beaverton could reduce the speed limit on TV Hwy between Tuallaway Ave and Murray Blvd from 45mph to 35mph, this would help allow that stretch of the road to be safer for people on foot and bike to ride along and cross. Driver’s too, might appreciate the slower speed.

Part of the reason behind the population requirement is probably the fear of creating small town speed traps. It is a popular revenue raising tactic in some places to drop the speed limit suddenly.

In a small town, this can make up a large portion of the city budget. Larger towns and cities have less economic incentive to do it unfairly.

Having spent a good deal of my childhood in a good`ole boy town down sout` I can say that the urge to fund your town coffers with this revenue stream is the crack that small towns survive on.

On the other hand is the ultimate motivation for this bill any less valid if it is a small town? Small children, elderly, pedestrians, drunks walking home from the bar less than 200 yards from home: all these people are at risk from 55+MPH traffic.

Drivers that think they have the right to blaze through some dinky one light town just because it is small and in the middle of nowhere.

Sure: some of these little fiefdoms are run by Boss Hogg wannabes but that does not make the need to protect the public any less real.

My name is Christy and I am Rep. Cannon’s legislative aide. HB 3150 is going to be significantly amended from how it was originally drafted. I left a message with Jonathan, who can hopefully post the amended language. It will be very, very similar to SB 344. The hearing for HB 3150 will be on Friday 2/25. The Senate bill, as I understand it, will be up the following week.

SB 344 and the new HB 3150 would both essentially allow for the city to change the speed limits on our bikeways to 20 mph.

If you have any questions, feel free to email our office. We are easy to find via our webpage, http://www.repbencannon.com.