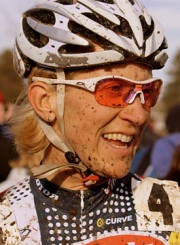 Later this month, 39-year old Portland bike racer Sue Butler is headed to St. Wendel Germany where she’ll represent Team USA at the UCI Cyclocross World Championships. To help get her there, a fundraiser has been planned for Tuesday night at Hopworks Urban Brewery (2944 SE Powell).

Hopworks will donate $1 of every pint sold that night. All you’ve got to do is show up and tell the server that you’re there for the Sue Butler Fundraiser and they’ll do the rest. Butler herself will be at the event selling tickets for a huge raffle with over $4,000 in bike gear.

This is Butler’s third time on the Worlds team and she shares the honor with just four other American women. While cyclocross — and bike racing in general — is on an upswing in the U.S., all but a very small handful of athletes can make a living doing it. Butler addressed that issue on her blog a few days ago,

“I do it because I love it. I think there is a perception that I actually get paid to do this. Wrong. I am a sponsored athlete in the very minimum sense of the word.”

Butler says the sponsors of her Colorado-based Hudz-Subaru team give her a travel budget, gear, and moral support on race-day; but that’s it. Getting to Worlds (and surviving once you get there) isn’t cheap. Butler says there’s a $1000 fee from USA Cycling just to participate.

Not that Butler is complaining. She acknowledges the amazing support she’s gotten from sponsors, friends, and fellow racers through the years:

Tuesday night is a chance for everyone in the community to “step up” and show support for a local racer who will represent our great city and state on the world stage. Consider coming to the Sue Butler Fundraiser Party at Hopworks on Tuesday (1/18) from 6:00 to close. Families are welcome too!

Goooooo Sue! We are all rooting for you!

Considering how much money USAC makes off individual memberships and race fees at their sanctioned events, it’s an embarrassment that qualifying racers must pay the $1,000 USAC fee out of pocket to race at Worlds.

Enjoy some beer and help Sue represent PDX! (Or, if you don’t drink beer, you can click on the “Donation” button at her blog and buy a raffle ticket.)

Will there be taxi’s there with bike racks at closing?

@jim: just show up on a tandem with a designated driver/pilot. Problem solved if you want to get trashed for the cause.