[This story is by Portlander Ryan Hashagen (owner of Portland Pedalworks), who is traveling through Latin America for business and to investigate cycling culture, infrastructure and policies.] 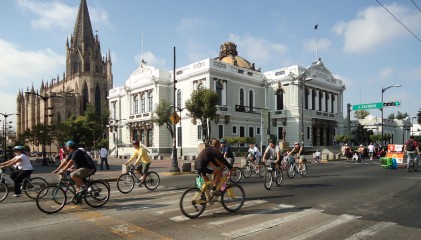 Guadalajara’s Via Recreativa (like our Sunday Parkways) occurs every week and attracts 150,000 people.
(Photo © Ryan H.)

We are traveling over land and sea by public transit to Puerto Montt, Chile. One purpose of our travels is to investigate cycling culture, transit, and public spaces in Latin America. These travels have taken us through Guadalajara, which is an official Sister City to Portland. What we found in Guadalajara were many innovations in cycling culture that can inspire Portland. 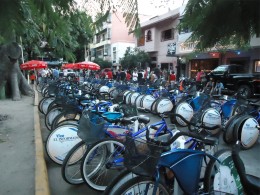 They have a hugely successful car free Sunday event, a vibrant and growing ‘bike fun’ culture, and three different bike share systems! The city is also constantly creating new public plazas and parks. We were really blown away by the passionate, diverse, and mature activism that is occurring in Guadalajara. They are truly building what they call a “social movement for urban mobility, culture, and public spaces.”

Below, I’ve summarized the key takeaways from three pillars of Guadalajara’s transportation revolution.

Via Recreativa (similar to our Sunday Parkways): 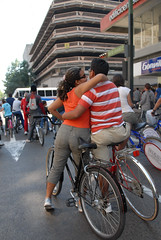 Learn more about what we learned from the Via Recreativa here.

We attended two “bike fun” rides in Guadalajara put on by the group “Al Teatro en Bici.” We were very impressed by the hundreds and thousands of cyclists of all ages that they have participate.

We shared many more details on our “Bike Fun in Guadalajara” post here. 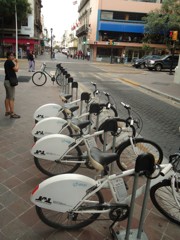 Guadalajara, like many other cities, wanted to develop a bike share system. Initially, the city government did not have the political will to implement a plan. Citizen activists took the lead and designed a very affordable, innovative approach to bike sharing. They did not rely on government subsidies or advertising revenue to fund the program. They relied on the sales of bike racks!

Since their initial success they now have 2,600 members and both the City of Guadalajara and the local newspaper have started their own Bike Share systems.

Guadalajara has many lessons to teach us. In Portland, we often look to New York and Copenhagen for inspiration, while our sister is pushing the boundaries and creating many innovations that we could learn from. Her citizens are passionately pushing for a new urban mobility, culture, and public spaces. Her leaders are following.

If you want to learn more about our transportation investigations in Guadalajara, check out our photos and stay tuned to the Active Right of Way blog for more reports. We’re also tweeting as we go via @portlandpedals.

Very cool. Thanks for writing about this. I wonder how their budget for the Via Recreativa compares to ours for Sunday Parkways. Something tells me that it is much cheaper.

Great report Ryan, I look forward to your next dispatch.

“They are truly building what they call a “social movement for urban mobility, culture, and public spaces.””

“..but to use cycling as a vehicle for “a social movement for urban mobility, culture, and public spaces.”

In Latin America, there is a cultural history of social activism, a legacy of the era of Guevara, Castro, and even Trotsky (who was murdered in Mexico) and other communists who paved the way for a public consciousness that involves the idea of social justice and equality. In this country we persecuted communists, and our culture is centered around the individual and personal freedoms that each of us should have the right to enjoy. I am not advocating for either extreme, but I think it is apparent why citizen activists in Guadalajara have a much easier time convincing people how good an idea it is to support a group like Al Teatro.

My experience with activism in North America is grim at best, usually a handful of dedicated people who can only agree that consensus is the best way to make decisions, then tie their own hands by not being able to come to consensus on anything. Real leaders are few and far between, but again, the social glue to hold a movement together is weak at best anyway. I predict Guadalajara will become a much more livable city over the next five to ten years as a result of groups like Al Teatro, while cities here in the US will remain car centric and dependent until we simply cannot afford to anymore. That change will be painful, but it’s the future. We could really learn a lot from Latin American cities, but we won’t.

It’s so important that we look to what other cities and countries are doing for good ideas on the home front.

Hey Ryan, any sense of what the mode share split is in GDL? Mexico City?

I am from California and have lived in Guadalajara for the past 4 years. Also, I am an avid distance rider. From this story, I almost felt like getting on my bike and riding around this beautiful city. However, in reality, Guadalajara is the most unfriendly bicycling location that I have yet to experience. Traffic is terrible. The roads are terrible. Traffic laws are not followed. And, there are no real laws protecting bicyclists or pedestrians. Therefore, riding a bicycle in this city, unless it is a closed road, sponsored event, is not advised or even safe.

T- I saw something similar. Yes, the Via Receativa was so much fun to ride. However, the daily nongroup riders have a different looking experience. The drivers are scary and the roads are not in the best of shape. Think Burnside, Sandy, Lombard, Cesar Chavez, 122nd – without any bike lanes. Compared to Guadalajara, Portland is an easy place to ride a bike on a daily basis.

I live in Guadalajara, and while I tend to agree with t’s comments (I lived previously in Boulder, Colorado, where cycling is much easier and safer overall), I want to thank you for your article. These are some *very* cool programs that Guadalajara has for cyclists, and they should serve as an example for other cities. It is nice to see some of the many positive things about our country discussed online for a change, instead of all the fear-mongering that is so prevalent up north nowadays.

I feel that overall, while the city governments are not doing much to provide us with good alternative methods of transportation, the general public is interested in and supportive of them to a great degree. There is a big push here for people to improve their health through being more active, and I think many mexicanos are starting to take steps to do that. Hopefully, the government will take more active steps to assist them in this goal instead of just nagging to be more healthy.

Chris, are you from Alaska?? Climber?

Nope! I’ve never been to Alaska, and the idea of climbing frightens me.

Just curious. I have a friend named Chris who lives here…and I thought that you might have been him. Thanks.

We are stoked at the opportunity to learn from Guadalajara and many other cycling activists throughout Latin America. Please feel free to check out other lessons at the http://www.activerightofway.org blog and photos at http://www.flickr.com/portlandpedalworks

Guadalajara is by no means an ideal city to safely bike around. It can be and is, like many cities, downright dangerous. There is very little bike infrastructure provided by the city. The amount of cyclists are limited to the “brave and fearless.”

The point of our article is not to praise the virtues of Guadalajara’s modeshare or cycling commuters. But to learn from the lessons where our sister city is excelling. The biggest lesson that we think Portland can learn from Guadalajara is that if dedicated citizen activists lead on issues of building a more humane and safer street network, civic leaders will follow. It will take time to change the culture of driving that is pervasive throughout the city. But these activists are inspiring to us, at least.