And here’s how the hospital’s transportation director says they justify the cost:

“… we see this as furthering our health care mission as well. Providing young people with safe places to walk and bike allows them to be active and helps combat obesity. Alternative transportation reduces congestion and pollution which is linked to health problems…”

Here in Portland we’ve got several major hospitals that are bike-oriented in various ways. 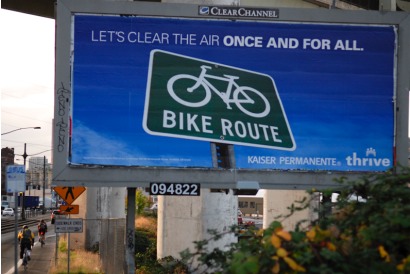 Kaiser Permanente has made cycling a major part of their “Thrive” marketing campaigns (even running a bike-centric commercial during the 2008 Olympics). Dr. Philip Wu with Kaiser sits on Metro’s Executive Committee on Active Transportation and was a keynote speaker at the Oregon Bike Summit.

Providence Hospital (which happens to be adjacent to the future Sullivan’s Gulch Trail along I-84) has been recognized as a “Bike Friendly Business” by the League of American Bicyclists. Providence also has an official Volunteer Bicycle Coordinator position which is filled by 2006 BTA Alice Award winner Darren Pennington (Darren also tells me Providence is hosting the 50s Bikeway Project Citizens Advisory Committee meetings).

We’ve got a major funding gap for active transportation and wrestling away money through the DOT and legislative measures will be a bruising and drawn out battle. Perhaps it’s time to seek more private investments to help build our bike network. We have the hospitals and the relationships ready to go. Let’s make it happen!

For anyone in the Seattle interested in providing input on potential projects that this $$$ might fund, there’s a Children’s-sponsored “Livable Streets Workshop” on November 13th. Details are:

Re #2 & #3: Opus the Poet – I’m not sure what you are trying to say. Is it that the hospital should have given more? Or that the amount doesn’t merit kudos? (It’s the “…that’s about it” part of your comment that suggests your disappointment.)

A reality is that most bicycle/ped improvements need money in order to happen. Money for planning, money for equipment, money for construction, and probably money for even more categories.

I don’t know anything about this hospital or issues in Seattle. I presume the hospital was under no obligation to contribute anything. That they chose to do this is great.

And giving such positive reinforcement is the best way to encourage other organizations to act similarly.

Jon, I’m obligated to add OHSU to that roster of bike-friendly hospitals. We have over a 1,000 bicyclists that participate in our cash-for-biking program that is now approaching a payout of $200,000 annually. With facility upgrades, that’s a quarter-million dollar annual program. OHSU is also a top sponsor of the Bike Commute Challenge and, despite our employees splitting across 26 teams, I’m pretty sure from the final tally, I was lucky enough to captain the team with the most miles of any business or team (28k+). (There’s no award for that one yet, but in unabashed self-interest for my team, I’ve been plugging the idea to BTA.)

Also, today is, coincidentally, the launch of our new bike site (can only be accessed by OHSU members, info here: http://www.ohsu.edu/parking/bike/OHSUBikeSite2010.pdf). If you’re not exhausted yet from all these plugs, I’ll be talking more on bike incentives and our new website at this month’s public meeting on biking on Nov 18. http://www.portlandonline.com/transportation/index.cfm?a=144945&c=34816

The parentheses got caught in the hyperlink on one of those links: http://www.ohsu.edu/parking/bike/OHSUBikeSite2010.pdf