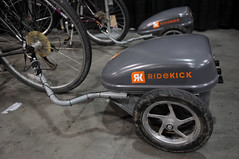 Everyone’s been talking about e-bikes, and there’s a dizzying array of bikes and products for that growing market; but the Ridekick electric-assist trailer stands out from the crowd. The idea with the Ridekick is to put the battery in a trailer instead of on your bike. The added benefits are that you get some added cargo space and you can attach it to any bike. The battery drives the wheels of the trailer and the power goes right to your rear axle. Ridekick uses a cheaper lead acid battery which makes this system considerably cheaper than others (MSRP $549). The lead acid battery is also heavier, but with the weight just inches from the ground, it actually improves the stability of the trailer and doesn’t have the same negative impacts as having it attached to your frame or a rear rack. The whole unit weighs 39 pounds. 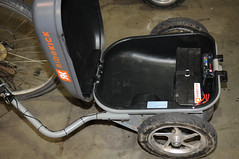 Another interesting approach to giving your bike an electric boost comes from Hidden Power. It’s a super lightweight (just 5.7 pounds) kit that attaches to your frame and drives a small wheel, that then drives your bike’s wheel. Power comes from a 330W motor and a compact lithium battery. Hidden Power won a Gold Award at Eurobike and made its U.S. debut here at Interbike. 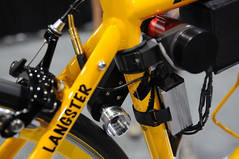 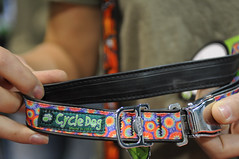 Cycle Dog is a company based in the Portland area that has experienced huge growth in their one and a half years in business. Since they debuted back in July 2009 the company has amassed 350 dealers and four distributors. Founder Lanette Noble estimates they’ve used about 20,000 used inner tubes. 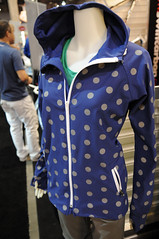 Modrobes is a new bike fashion brand based in Toronto. Their clothing is made from 91% recycled plastic soda bottles. The material is water resistant, breathable and quite stretchy. Their jackets, shirts and hoodies are cut specifically for cycling and they have men’s and women’s models. The blue polka-dot hoodie (with reflective dots) on the right retails for about $125.

Light & Motion debuted their new VIS 360 commuter light system at Interbike. The lights mount to your helmet and offer 360 degrees of visibility. For $169 you get 120 lumens of combined brightness between the front and rear lights. Run time is 2.5 hours and you can recharge them via USB! 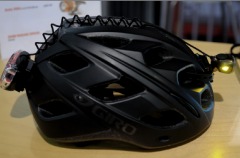 Montague is mostly known for their US Army-issue “Paratrooper” folding mountain bike, but now the Boston-based company is trying to bolster their civilian offerings with the new “Boston” commuter bike. Montague has mastered the full-size folding concept and their bike folds quickly and compactly while maintaining the ride characteristics of a full-size bike. An added bonus is their “Clix” quick releases which let you undo your wheel with one flip of the lever. A singlespeed Boston sells for $769 and the 8-speed internal version goes for $1,000. 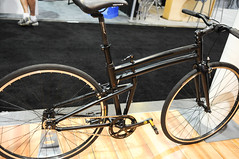 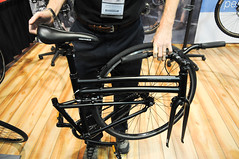 More notes and photos coming soon… Get a sneak peek at the photos in the gallery.

i fart in the general direction of electric assist systems!

A E-trailer that weighs 39 pounds? By the time you pack around this plus your 20-pound locking chain to keep it all from getting stolen, your $5000 15-pound bicycle seems a bit superfluous. Besides, what ever happened to leg power? A solution in search of a problem?

Gastrointestinal disorders aside, I thought the Hidden Power system was a viable and relatively non-invasive way to add electric assist and allow for range extension and hill smoothing.

For Pete’s sake. Why on earth would anyone want to forego the health benefits of cycling and get an electric motor? And please don’t respond by saying “steep hills.” Propel our bikes, with muscles!

Has everyone forgotten where electricity comes from? Out of the frying pan and into the other frying pan.

No George i plug my unit into a nuclear power plant

True, some ebike conversion kits are heavy. The trailer option could be a nice way to remove that weight from the bike when it’s not necessary. Ebikes aren’t for everyone – if you like pedalling, pedal away! But they are for some people, and they’re a great alternative to a car, aren’t they?

In re: to power or carbon footprint – I charge my ebike from solar panels on the roof. Some people may power their ebikes from other sources of electricity. Likewise, some people pedal their bikes with power derived from food that may have a larger carbon footprint than the electricity used to charge an ebike. To each their own solution.

Problem: I’d like to carry home a ton of groceries, but that hill at the end of my ride is a doozy, and I can’t make it up it w/ a full load. But I don’t want to buy a dedicated ebike, or permanently convert one of my beloved stable.

Ebikes aren’t for everyone. If you like to pedal, then pedal! But ebikes are for some people, and they’re a much better alternative than a car.

yes, I want to make cycling easier… and I’m not too concerned about the carbon footprint of an electric motor…