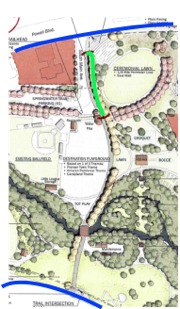 The Oregon Department of Transportation is likely to confirm Wednesday the first three projects to be funded through their new Urban Trail Fund (UTF) program. The UTF was established as part of the Jobs and Transportation Act (HB 2001) that passed the state legislature in 2009. There were $970,000 dollars available in the fund this year.

The following three projects have been recommended for funding by the Oregon Transportation Commission, a governor-appointed body that advises ODOT:

$300,000 – Springwater Trail Spur (Gresham)
The grant will fund an informational trail kiosk and 250 linear feet of an off-street trail that will eventually connect E Powell Blvd with the Springwater Corridor Trail through Main City Park in Gresham (total trail is 900 feet). According to Gresham’s grant application, the trail will be 17-feet wide and will be constructed this fall.

$210,000 – Astoria River Trail Extension
This project will extend the existing Astoria River Trail about 1/2 mile, connecting the trail from downtown Astoria into the Alderbrook neighborhood. The City’s grant application states that the completion of the trail will “close a critical gap by enabling residents to walk and bicycle to work, school, or commercials areas in the rest of the City.” The trail will also offer a nice alternative to congested Highway 30 for the legions of bike tourers that pass through Astoria. 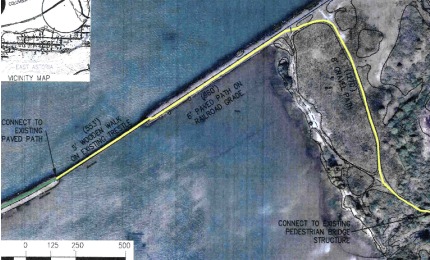 ODOT received 15 applications worth $15 million and the projects were scored on a five-part criteria. Factors weighed in scoring each project were how much a project benefits the transportation system, whether it’s technically feasible, how ready the project it, how much support a project has, and how urgently the funds were needed. According to ODOT, the purpose of the grant program is to,

The Portland Development Commission applied for $586,000 of UTF funds for the “Bridgeton Promenade” project—a half-mile, multi-use, urban promenade along the Columbia River in the Bridgeton neighborhood—but they did not receive funding.

The official announcement of the grant awards will be made this Wednesday at a meeting of the Oregon Transportation Commission. Learn more about the UTF program on ODOT’s website and read our prior coverage for additional background.

So the Portland metro area got <33% of this funding and the rest went to other parts of the state.
Hooray for them; don't say y'all never get any thing and Portland gets everthing.
Seriously, stop it.

I’m excited to see the more trail added to the path in Astoria, that city is a really fun place to ride, and if you want a challenge, bike up to the Astoria Column!

I’m sorry to see that the Bridgeton Promenade was not funded. There is a heavily worn goat trail testifying to its utility. I’m tempted to second guess the decision to fund other projects over this one, which would allow bikes and peds to avoid Marine Drive – not fun to bike or walk with high speed traffic and trucks. – but I’ll resist the urge. Suffice it to say that this is a really worthwhile project.

If this is all trails that the State of Oregon can build this year, and if all the funding is a one-time lump of federal funding, then its high time we got some general transportation fund $ allocated specifically for bike/ped projects.

Compare this to how many highways they’re building/widening this year… http://www.oregon.gov/ODOT/COMM/2010_ConstMap.shtml — I’d like to see a bicycle project map like this for Portland Metro — it wouldn’t look as impressive, but we would see the Springwater Trail repaving, Going St. Bike Blvd, etc., all in one graphic.

I’m not saying we shouldn’t be grateful for these projects coming through, but I am saying that unless we can do better than this that things won’t get better very fast…

I’m sorry, but as for the Gresham “trail”… what a waste. Springwater is ALREADY connected to Powell here, via the park street and parking lot. $300,000 for a spur that provides NO new connections? Surely that money can be better spent elsewhere.

In reply to Ted Buehler statement on the state can do better….

During the debate on HB2001, the OTC said they wanted to use a large portion of the federal gas-tax funds that Oregon gets that are flexible (ie. can be used for roads or bike/ped or TDM or transit projects) and use them on non-road projects (i.e projects that don’t add road capacity). Today ODOT announced the Flexible Funds program with $21 million available in the first biennium, with the intent of doing the same in future bienniums. This will fund bike, pedestrian, transit, and TDM projects. see