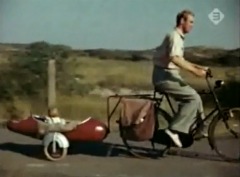 A strange torpedo child trailer is just one
of many interesting images of
bike traffic in The Netherlands
via a 1950s era video below.

Happy Monday everyone. Ms. Blue is on her big Bikestravaganza tour, so I’m doing the Monday Roundup for the next few weeks. Here goes…

– The “fixie craze” is being taken seriously in Australia. Their Competition and Consumer Commission is threatening bike shops with hefty fines for selling bikes without handbrakes.

– Trek unveiled an awesome-looking concept bike at Trek World that our friend Tyler of BikeRumor.com described as “What Mad Max will ride when he runs outta gas.” Check out the ‘Broadsider’ and see if you agree.

– Los Angeles Mayor Anthony Villaraigosa continues to support bicycling after a crash while riding left him with a broken elbow. He has announced a bike summit to make L.A. into the “cyclist’s paradise” he thinks it can/should be.

– A neighborhood in Brooklyn is under siege by a vigilante who’s putting super glue in the key holes of bike locks. They’re calling it “vigilante injustice.”

– The Instant Librarian (Melissa Reeser, a writer and editor for Boneshacker Almanac) shares a thoughtful reflection on sharing the road after racing up behind a slow-poke rider. She asks the question, “As cyclists, do we want to adopt the same speed and attitude of cars? Are we going to pretend we can do everything on a bike that we could do in a car, or are we going to celebrate the difference?”

– Elly found this video on YouTube of biking in the Netherlands in the 1950s. Some stellar footage. Watch it below:

– A new HAWK signal – that’s High Intensity Activated Crosswalk for all you non-wonks — was installed in Delaware. That’s not exactly huge news, but what is big news is that USA Today covered it. Also in Delaware, their governor signed a Vulnerable Road Users bill into law.

– The New York City Department of Sanitation is holding a hearing on “Proposed Rules Governing the Removal and Disposal of Derelict Bicycles.” The folks at GhostBikes.org are concerned it could mean the end of the iconic roadside memorials.

– The New York Times Sunday Travel section had an in-depth article on Google and online bike directions in general (and I got a few lines in for good measure).

– San Francisco shows they’ve got more than a lifted bike plan injunction up their sleeve. They made huge news last week with the introduction of dynamic parking lot pricing — a.k.a. the price on the meter goes up and down depending on supply and demand. Watch a cool animation explanation and learn more at SFPark.org.

– Speaking of parking spaces and San Francisco, an idea that started in that city has now spread to New York City. They installed their first “pop-up cafe” in a parking space last week. Judging from the photo in this post, rocker/advocate David Byrne and DOT commish Janette Sadik-Khan approve. (Stay tuned for more on Portland’s effort to do the same later this week).

– As if the Floyd Landis news could get any stranger… a guy in Kentucky bought a bike for $5 from a yard sale and it turned out to be a custom mountain bike made for Landis worth about $8,000.

– And finally, another innovation from NYC. A few “bike nerds” have developed Social Bicycles, a new type of bike-sharing system that relies solely on GPS and mobile phones.

Hey, you got the closing quote in the NYT article, Jonathan. Cool!

Some HAWK signals on the 205 path crossings would be nice. Especially at Division before someone gets killed.

I posted the video to my facebook–I love it!

the SF Park site is SFpark.org (not .com).

aussie fixie craze: now you’ll have to sign a disclaimer that the bike is not legal for street use when you buy it…

trek’s mad max bike: pure aesthetics… is that supposed to be a fender? although it might be good for broadsiding things… I guess for a “roller derby” this thing would rock…

Brooklyn lock gluer: he doesn’t like bikes there so he’s making it harder for them to leave? he’d be better off spray painting them bright orange… either way somebody is going to set up a sting and catch this person and then they’ll be rethinking their idea in court…

share the road, not the attitude: exactly! yes I ride to get out of the car, be healthier, save a few bucks… but I also do it so that I can stop and smell the city of roses… I’m a dreamy cyclists and although I don’t wander as much as the person in the article I do tend to take it slow and enjoy my commute… so I’m pretty used to being passed by faster people…

HAWK signals: please don’t push them when there’s no traffic, and if you’re on a bike make the effort to enter traffic like a vehicle before resorting to pressing the button…

NYC Removal and Disposal of Derelict Bicycles: didn’t we already have an article posted about this and that the city was going to let them stay? or was that another city?

on that note I had my GPS when leaving the MMR Saturday morning but it’s not a lot of help on a golf course… (: still, since I was in front people assumed I was the leader… I did lead everybody out, but after we all had to pool up to find out where the hidden crest in the dark was that we all needed to go over…

Pop-up Cafe: sweet! there’s going to be one here in PDX? give us some more details so maybe we can be a part of it…

Social Bicycles: interesting idea but what makes this different? that I can just look up the nearest bike to me? these don’t need to be taken to their home base? is it the all-inclusive lock and tracking device?

We could all do with a lot less California coverage.

The Brooklyn lock gluer must think that it only works on bike locks. Most cars have at least three locks including the trunk. At any rate I’m sure that this person will have some serious restitution to pay when caught. My N.Y. lock cost nearly $100 dollars. Even if they are cheapo $30 locks, any that can be connected to this person should be replaced at full cost to the vandal responsible. When I hear of such narrow mindedness I just think how much it must suck to be them. Probably miserable every second of every day and blames everyone but themselves.