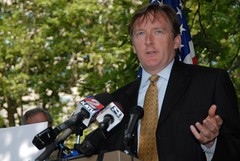 Metro announced this morning that Council President David Bragdon has been hired as Sustainability Director for New York City Mayor Michael Bloomberg. Here’s a snip from a statement just released by Metro:

“Beginning in mid-September, Bragdon will serve as director of long-term planning and sustainability for the nation’s largest metropolis. He will lead the mayor’s PlaNYC initiative to create a “greener, greater” city.

“Being able to do that is, like Metro Council President, a dream job for me,” Bragdon said this week in an interview. “It involves all the issues that I care about, in a place that I really care about. It involves natural area restoration, recycling of solid waste, improved transportation, infrastructure that we need for the future.” 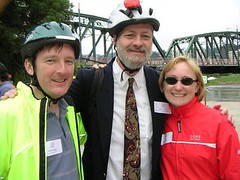 In a statement from Mayor Bloomberg’s office, Bragdon says,

“I am excited to return to New York City and I am honored to work in an Administration with such an ambitious sustainability agenda… My appointment is a credit to the people of the Portland region, who have been at the forefront of green buildings, bicycle transportation and natural resource protection.”

Bragdon had held Metro’s top spot since 2002 but he is term-limited out. Many people thought he might make a bid for Portland Mayor Sam Adams’ job in 2012.

While at Metro, Bragdon was an enthusiastic leader in promoting parks, trails, and active transportation. 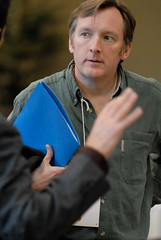 At the Oregon Bike Summit, April 2008

In May 2008 he helped launch the Blue Ribbon Committee on Trails, a high-powered advisory group made up of politicians, advocates, and business leaders with a goal to build out our regional trail system. That committee made a trip to Amsterdam and Copenhagen in August of 2008 and its members now make up the Executive Council behind Metro’s Active Transportation Partnership.

Bragdon was also the energy and vision behind Metro’s Connecting Green initiative that is now known as The Intertwine. The Intertwine is an umbrella coalition of our entire region’s parks and trail planning efforts.

On the controversial Columbia River Crossing project, Bragdon has been a critical voice as far back as February of 2007, but has also been a respected leader working within the process to make his concerns known. Most recently, he joined with Portland Mayor Sam Adams in supporting a 10-lane bridge option and detailing next steps to move the project forward.

Bragdon’s dedication to active transportation and vision for creating a healthy and livable region will be missed. With Bragdon complementing DOT Commissioner Janette Sadik-Khan and a strong and vibrant transportation advocacy community, New York City has an urban transportation dream team that makes it poised to take even greater steps in becoming one of the world’s most livable cities.

Bragdon’s departure leaves an opening atop the Metro Council. The Mercury’s Sarah Mirk reports that the position could be filled from the ranks of remaining councilors or they can appoint any registered vote in the region. Stay tuned for developments.

UPDATE: Below is a video announcement from Bragdon.

David Bragdon is damn smart, committed to livable cities, a fearless political strategist, and very funny to boot. What a loss for Portland. The NYC Dream Team just keeps getting better.

It’s been my pleasure to work (way)under Bragdon for the past eight years and although his effect on my day to day operations were small, his effects on the region have been great. NYC is a lucky town.
Good Luck
The important question to ask now is “Yankees or Mets?”

Congratulations to President Bragdon! He has been a vital leader in our region and I will miss hearing him speak and represent us at events around town. New York City Dream Team… wow…

Implement that Manhattan congestion pricing pilot program that has stalled for years.

Mr. Bragdon might be a Mets fan but New York’s Dream Team (budget and successwise) is more like the Yankees.

Bragdon is an Mets fan, according to the O’s story. Everyone has their faults, I suppose. 😉

Congrats David. Bloomberg couldn’t have made a better choice!

NYC’s gain is our loss.

Don’t stay away too long, David!

Bragdon previously expressed his reluctance to run for Portland mayor in an amusing 2008 “press release” :

Naturally, I would have preferred to see Bragdon take a stronger stance against the megabridge, especially in 2008, despite Metro’s uncertain political clout relative to bridge proponents. At this rate, however, NYC will soon be a still more serious contender for Portland’s livability laurels. In addition to rapid bikeway development, NYC’s bus rapid transit initiatives are putting PDX to shame. Metro President candidate Bob Stacey mentioned bus rapid transit in his campaign launch speech, and I know it’s being considered for Powell long-term, but I haven’t heard much from electeds.

Great to hear! I recently left Portland after 5 years to move to NYC. There’s been no drop-off in terms of bike commuting infrastructure from my standpoint. It’s pretty impressive to see what they’ve done for biking in this type of environment.

And whilst our provincial little ‘burg dithers over visioning, social impact statements, and general “spanking” about Copenhagen, a key player in Portland’s quest for bikes and livability leaves for the big leagues.