Skip to content
Screen grab of TriMet’s Open Trip Planner which could be ready for public beta-testing by early 2011.

However you feel about TriMet, say this for Portland’s transit agency: They might be better than anybody in the world at putting their bus and train schedules in your hands.

Since BikePortland last checked in on TriMet’s online trip planner, it’s become the most popular Portland-specific search on the Internet and it has unleashed an army of web and smartphone apps — all which have been built at no public cost. Now the agency’s trend-setting map team is working on the “holy grail”: an open-source multi-modal planning tool using the General Transit Feed Specification.

Or, in English: TriMet is about six months away from being able to tell you – and anybody else who might want to know – when it’d be faster to hop on the MAX for part of your crosstown bike trip.

Suffice it to say, Portland’s transportation geeks are very excited. 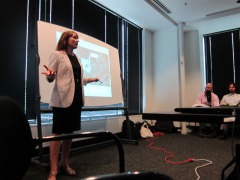 About 40 local transportation and data experts showed up yesterday to see one of the first demos of their new Open Trip Planner.

“We should have sold tickets!” Metro planner Daniel Kaempff quipped to the standing-room-only crowd that heard a presentation by TriMet’s IT Manager Bibiana McHugh, and Michael Keating from Open Plans, a non-profit, open-source software company (the same non-profit that funds and provides software for Streetsblog).

The Open Trip Planner — which was paid for by a $69,000 grant from Metro’s Regional Travel Options program — is still a work in progress, but you can already kick the tires on their test site.

See that panel that opens in the lower right when your trip involves bicycling? That’s a cross-section of the hills on your route, courtesy of the U.S. Geological Survey, mapped against every turn you’ve got to make.

It uses USGS data to give an instant elevation profile of your trip.

See that “quickest route/safest route” dropdown? That’s a trick TriMet picked up from ByCycle.org, the local site whose creator Wyatt Baldwin was hired by TriMet’s maps team in 2008.

“Anything is possible. We’ve got the richest, most valuable data in the world here. I think this is the place to do it.”
— Bibiana McHugh, TriMet IT Manager

But here’s the thing that’s got good-government types excited about the project: both the tool and its API will be entirely open-source. That means that once TriMet and its partners finish their work, agencies around the world will be able to use it – and keep improving it – for free. And third-party developers will be able to use it for smartphone apps nobody’s dreamt of yet.

“It’s going to be used all over and have support from all over,” predicted Aaron Antrim of Trillium Solutions, a Portland-based multi-modal transportation information consultant.

Already, transportation software developers in New York City, Poland and Spain have been pouring time into the project in hopes of putting it to work in their own cities. Thanks to their help, McHugh said, the project is six months ahead of schedule. She thinks it’ll be ready for public beta-testing in early 2011.

The crowd at Tuesday’s event was brimming with ideas for the next generation of online trip planning.

McHugh, the TriMet manager, is optimistic. She’s encouraged by Portland’s recent efforts to unleash reams of its internal government data on the Internet. “Anything is possible,” McHugh said. “We’ve got the richest, most valuable data in the world here. I think this is the place to do it.”

What trip-planning tricks can you dream up? You can bet TriMet and an enterprising flock of private app developers are watching.

This article was written by Michael Andersen, founder of recently launched Portland Afoot. Email him at Michael@PortlandAfoot.org or follow @PortlandAfoot on Twitter.

This is just one of the ways Portland is very lucky, and most people here don’t even know or appreciate it. Portland is way ahead of the curve in this arena.

And a quick plug for an iPhone app I have used since day one: PDXBus.

it doesn’t seem to know that biking across downtown is faster than taking the MAX… but I expect it’ll get there. I love the idea of putting bus lines and amtrak lines into a trip planner. After all, their trip planning services leave stuff to be desired. It would be cool to add taxi services in and have ‘cheapest’ versus ‘fastest’ options.

I expect in a few years, Amtrak and Greyhound and similar services would get most of their customers through a planner like this.

John, I’m going to immediately echo your plug for PDXBus. I abandoned iPhone for Android earlier this year and I’ve been kicking myself ever since.

Just tried it out. The elevation map is really nice. But the bike directions are horrible. They have you riding main streets, instead of bike boulevards a block or two away.

but they still don’t have Transit Tracker via text message…

Yeah, definitely a work-in-progress, at least with regard to bicycling directions. It routed me right down NE Sandy Blvd. (and no where did I indicate “strong & fearless”!), to Burnside, not even noting the Burnside/Couch couplet.

Nevertheless, it’s an excellent development and I’m sure they’ll work out the kinks over the next several months.

Didn’t work for me. It requires you to right-click the map to set your start and end points, but that brings up a context-menu that blocks the dialog that lets you set the start point.

…I should add, it picked the same route for me whether I indicated “quickest” or “safest” trip.

Knowing the developers and the development cycle, the problems will be addressed. Getting the right routes comes after getting the interface working properly. I look forward to getting better directions and a multi-modal directions hopefully means more bike commutes in combination with transit.

Having just come back from visiting Vancouver (BC), and having used their cycling route planner (http://www.cyclevancouver.ubc.ca/cv.aspx), this doesn’t excite me all that much. If you haven’t seen it, take a look and notice how they have options such as: Shortest Route, Least Elevated Route, Least Traffic-polluted Route, and others. You can even choose whether you want to include various landmarks on the map, such as drinking fountain or community center locations.

Granted, this is Trimet, so it’s geared towards other forms of transportation, but it’s just surprising to me that for the “Bike capital of North America”, we still don’t have a basic, up-to-date bike route planner. The maps are nice, but for longer, less straightforward rides, sometimes you don’t want to spend 15 minutes figuring out all the streets you’ll want to take.

Spiffy, there are a few SMS/text message applications for TransitTracker available at http://trimet.org/apps/

Works in IE, but not Firefox. Could be a nice tool when it’s finished. I tried to plan a bike route from my home near Powell Butte to my work in downtown, and it routed me down Powell until Milwaukie Blvd. So it still needs some tweaks for bike routes — no one in their right mind would bike on Powell west of I-205 where the bike lanes disappear.

I heard a presentation at Metro about this last week and they said they were in no way ready for the general public to start testing the actual route recommendations – a proper public beta test won’t be ready until next spring. So, I’m not surprised you’re all getting results you don’t like.

Mike #11, thanks, I thought those were all smartphone apps so I never even bothered looking there… pdxt seems to work nicely…

Paulie #7 & #12, it works in my firefox… it’s annoying that it opens the context menu over the top of the start/end point menu so what I did was just clicked up on the toolbars to make the context menu go away and then I was able to get to the selection menu… but I agree that it’s a bad way to make an interface…

I tested the route I take to work and it told me to do the same thing I already do… max to mall, bike from there to work… which is 15 minutes faster than waiting at the mall for the bus… I told it to do transit and bike…

but the idea is neat…

Hi! I’m a developer on OTP. Thanks everyone for the bug reports. As people have noticed, the bike safety routing doesn’t really work on TriMet’s demo. I don’t know what settings the demo has set for where bike lanes are, so I can’t debug that piece of it right now.

Paulie, Spiffy, what version of Firefox are you running? To find your version, click “Help”, then “About Mozilla Firefox”. Are you running on Windows or on a Mac (I assume not on GNU/Linux, since I don’t see the bug)?

We would really love to fix that, because it sounds like an unpleasant bug (even if we don’t expect it to come up much once we have fields where you can type your start and destination).

One more reason to make the jump to an always-online smartphone, something I’ve been putting off for a couple of years.

This is very exciting stuff.

Awesome idea, and it’s even better to see open source development principles taking what could be a pioneering role here. It’s always great to see ideas blossom and take on a life of their own as other people modify them to suit their needs.

Funny, when you cross over the river, they elevation chart goes down to the water. It also has me making turns off the bridge jumping 40ish feet down onto Interstate. That would be one scary turn!

Sweet! Always good to see OpenStreetMap in the news, and I’m glad TriMet finally came around to using it. I encourage folks to report bugs with the map data on http://www.openstreetbugs.org/ or if you’re a GIS nerd, fix it directly on http://osm.org/

Hopefully it will tell me where the deadly Tri-met drivers are.

I’d like to point out that there is a similar ongoing project in the Twin Cities. lCyclopath does great bike directions (i.e., doesn’t “route you down main streets”), is open source, and is working on soon being multi-modal too! It lets users do a lot of tweaking in order to get custom routes based on distance, bikeability, and other preferences. Oh, and the road network itself is editable too!