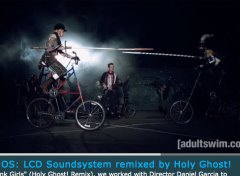 Still from video.
-Watch it below-

First it was The Flaming Lips, now it’s LCD Soundsystem who has looked to Portland’s colorful, bike-riding characters for a music video.

I heard about this being filmed just a few weeks ago and word on the street was that every local freak bike builder was there. It’s a gorgeous look “into the culture of bike jousting” with a lot of familiar faces including Irondelle/gravity biker/chariot war champion Emily O’Connor, jousting legend and former Alberta Clown House performer Rabbit, the inimitable Dingo the Clown, Hammercising acro-balancer Dutch, and many others. The song is “Drunk Girls” (Holy Ghost! Remix) and the piece was directed by Daniel Garcia. Watch it below…

That is AWESOME you guys!!! SO fun!

Interestingly enough, none of them jousted at MCBF yesterday. Maybe because the real deal isn’t cool anymore. The video sure looks good, though, except for the party cups.

I was doing the same thing in the video that I did at MCBF yesterday, which is heckling jousters.

Next up – Somones gonna make a music video of beer bungee?

plastic water bottles? plastic party cups? fire…. in burn barrels? fake smoke, fake jousting with pointed unpadded lances? A STARTING GUN?! MONEY EXCHANGED?!?!? this makes me want to hurl… this disgusts me. and the worst part about it, is that these are some of my best friends… i’m really dissapointed by this ego-stroking fashion show, y’all. good thing we actually reclaimed the streets yesterday at mcbf, and kept it real outside of virtual land. i heard that during the filming of this (which took place at a known, established camping grounds for houseless people) there was a private, catered buffet that everyone was eating while the shoot kept the regulars out of their homestead for hours… this is not what i thought my community was about. i think i’m going to be sick.

Correction: I said that this video looks good, except for the party cups, but I actually meant good as in “eye candy”. It also makes me sick how the whole culture was turned into a fashion show / frat party.

That “culture” has always been a fashion show / frat party! At least now they will be adding to society through ad revenue!

Be not afraid, every scene will be capitalized upon. At least be thankful it’s a decent band! Also, private buffets rule! Also, get off my lawn!

that was awesome! they really put a seedy underground look to it that came off a bit post-apocalyptic…

people love a good freak show. at least this is well shot.

camera appears to be stuck in slow motion

what is regrettable is how many freakbikes were ignored. there was some stunning rides on site

Pinga De Clown said “It also makes me sick how the whole culture was turned into a fashion show / frat party.”

That’s fairly accurate, there is way too much emphasis on costume, and there is almost always more standing around than actual riding.

We can change that!

It’s a stylized take on the culture. So what if someone’s idea of it includes solo cups and a starting gun? It’s not a documentary. Just pretend all those solo cups are pbr cans, and that starting pistol is phil’s megaphone.

And if y’all think we didn’t help out the people living in the area with goodies throughout the night, you’re gonna make me sick!

I liked it! Fun to watch, over the top, stylized.

Nice way to bring tall bike jousting into the commercial forefront. Maybe this will pave the way for Urban Outfitters to start selling tall bikes along with their fixies?

This is awesome! Looks like a narrative–not a documentary–to me.

I hope people who may try to emulate this video use padded lances.

hope you all got paid. heck, hope you got paid scale. in my experience with the ad/movie/tv/music biz exploiting scenes/subcultures for this kind of thing (and, whether you consider it a positive or a negative thing, its still exploiting), the people being filmed are all too happy to sign away their image for pennies. or a buffet. or nothing at all. if youre going to put yourself for people to scream “sellout!” at (and while im not doing so myself, im sure that word is getting bandied about. it always does.), at least get paid well for it.

Oh my lord people, it’s a music video! Did you think they would try to make a boring video for a pop song about drunk girls. For a group that is always saying, “Hey! Look at me!” You all point a lot of fingers when someone actually takes notice.

I thought the video was great and I thought it was cool to see some familiar faces. It entertained, which I’m pretty sure was the point. But they had a buffet at the shoot? GASP

I had fun – and for a low budget music video, I think it came out well.

It’s unfortunate the shoot displaced people and would not allow many of our friends on set for legal reasons.

To clarify… food and beverages were distributed throughout the night and left next to those who were sleeping/displaced. Not to mention the few people who took the time to go over and apologize for our ridiculousness.

Well, I guess someone had to sell out like this at some point. And I guess we’re not surprised it was you.

p.s. You’re rationalizing kicking the homeless out of their homes so you could preen and eat video shoot buffet? Really?

p.s.s. The whole world hates you.

us “selling out” let us put money into making the best pedalpalooza rides, especially lit and loud, that much more awesome.

so once again blogosphere, eat a dick.

wow, that makes tall bike jousting look so authentic! i even saw one or two people in the background who have actually tall bike jousted in real life!