Ken Southerland, the man who got a $143 ticket back in February for carrying someone on the rear rack of his bicycle, earned a victory when the case went to traffic court this morning.

Southerland pleaded no contest to the charges and Portland Police Officer David Scott agreed to have the citation “discharged,” which means Southerland will not have to pay the fine. At issue was whether or not Southerland was guilty of ORS 814.460, “Unlawful passengers on a bicycle”.

As we reported back in April, all Ginsberg had to do was demonstrate to the court that Southerland’s rack was “safely equipped” to carry a passenger. According to Ginsberg, he showed Officer Scott photos of the rack in question and explained to him that it was more than capable of safely carrying Southerland’s passenger.

The rack is made from sturdy steel tubes and was fabricated in Portland by Mitch Pryor of MAP Bicycles. 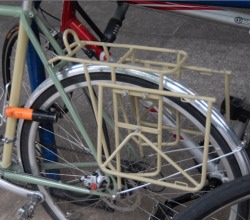 Instead of taking the case to trial — where Southerland risked a “guilty” finding and the PPB risked having the citation overturned — the two parties agreed to the discharge to settle the matter.

The Oregonian also reported on the case. Read more details about what happened on OregonLive.com.

Well, it would have been great if the citation had been overturned, but this at least keeps Ken in the clear.

Nothing resolved with this law.

Tickets will still be written.

A good test case to get the law thrown out, now we have no president.

Someone else will have to take the case to the courts

We also have no precedent.

re comment 2, i agree it is disappointing from the point of view of seeking a narrative arc or whatever, but this result gets the job done for ken southerland, and i think it clues the police that at least the moms carting their kids around on the extracycles are clear. will the police continue to hassle cyclists (or homeless or mentally disturbed people, or blacks, or anarchists . . .). well, yes, that is what the word “police” sort of implies.

If only we could get the gang members to give each other rides on bicycle racks (or run stop signs) instead of killing people. Then the PPB would take notice!

maybe now the police will focus on other more important matters…

So can I carry someone on my steel Tubus rack that has a Max load of 40kg? It may not be a Map cycles rack, but it is tubular steel, connected to the frame in two places…

I assume Tubus puts a weight limit on there for legal reasons, while the rack may be able to carry much more.
I weight 80kg and I have tested it out by sitting on it.

This could be easily be more defensible if the bike racks were sold with foam seating pads and foot pegs.

That sounds ridiculous, but bike rack pads are most prevalent in Taipei, where perhaps +40% of all bicycles or components all made in the world:
http://picasaweb.google.com/lh/photo/5BYoIBAbzTu4hTdX8b1L9BwNw1mwW6bWMiSwm-plSAE?feat=directlink
http://picasaweb.google.com/lh/photo/wdIu3aMGxcD4XgT71AfKFRwNw1mwW6bWMiSwm-plSAE?feat=directlink

Lucky guy, that ain’t no people carrier. I don’t care if Chris King machined the hardware and Sacha White welded it with unobtainium.

You can also get a ticket for carrying a passenger in the bed of a pickup truck. I think Mr. Southerland got off easy, but it doesn’t negate the purpose of the law – which is to reduce legal liability for the vehicle’s operator (and insurance company). Extracycles, bakfiets, pedal-rickshaws, passenger trailers, etc. are obviously designed for human cargo, not standard pannier racks.

I know many of you don’t like the nanny state and all, but some of these things are for your protection as well. I doubt Ginsburg would’ve had so much fun with the trial if it was a civil suit that resulted from injuries to Southerland’s friend had he fallen off the rack and sued. If some lady can recover money from McD’s for spilling hot coffee on herself, I doubt the negligent vehicle operator would stand much chance in a civil suit where the burden of proof is lower.

Is Ken Southerland’s rack beefier than the average one found attached to a commuter bike? Yes, and that may be his saving grace, but the bolts connecting it to the eyelets are no beefier than any other rack and would likely fail under repeated heavy (human-sized) loads.

This case isn’t a victory for anyone but Mr. Southerland – it’s a warning to use common sense and stick to the design parameters of your equipment.

More importantly were they wearing helmets?

Look at the size of Ken’s RACK! Woah! If you had shown the Judge some pictures of that beauty in court this would be case dismissed.

Not to mention the disc brakes. Design does not stop at the factory, and the law mentions “design” as the fulcrum of the statute.

Folks, you can win in court of Appeals somewhat easily, even if you lay out the facts in lower court. You just have to read the law. FYI. I’m not a lawyer, and this is not advice.

re comment 10, i doubt the purpose of a criminal or traffic statute is to reduce anyone’s exposure to civil liability. probably the purpose is to reduce the incidence of people falling off bicycles and under the wheels of motor vehicles. yet another law for the convenience of motorists.

Dudes & Dudettes- In the far east, I have seen Mom, Pop, two kids and the dog all on one bicycle, along with 12 cases of empty soda bottles on the front rack. Whatever. And no gears usually. They did have one thing though – a tire-driven bell…riiiiiiiiiinnnnnnnngggggggg!

I believe Safety, Justice, and the American Way would be better served if the PPB would enforce the driving while distracted laws that, when broken as they constantly are, are much more likely to kill a bicyclist or ped. Just a thought.

I rode in amsterdam with my lady on the rear rack as ALL the other Dutch do. No crashes, no injuries, no tickets.
I went on a 5 hour ride with 4 bikes and 5 people, you do the math. Rear racks are more than enough to carry someone safely.

The fact that this had to go to court — when our legal system and law enforcement agencies are already overloaded trying to deal with serious violent crime — is about as stupid as it gets.

I maintain that when we hold motorists accountable for actions that break the law and injure or kill bike riders and pedestrians, THEN I will take cases such as this more seriously.

This case was an example of The Nanny State taken to an illogical extreme. I’m sorry that Mr. Southerland had to go through such nonsense at taxpayers’ expense.

I think most people don’t understand what this means.