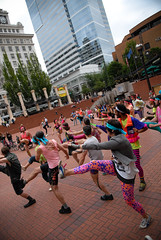 What do you get when you cross the moves of MC Hammer and the 80s aerobics phenomenon of Jazzercise? Yes, that’s right, Hammercise.

Created by Portland’s most energetic and colorful bike-loving dancers — GiGi (Sarah Goforth) and Harry Fabulous (Jon “Dutch” Paglia) — Hammercise is the new dance craze that’s sweeping the city. It makes sense that it comes from Dutch and Sarah. Dutch is a member of acrobatic troupe Kazum (in addition to being a fearless gravity biker) and Sarah is one of the original members of the Sprockettes (where she’s known as Agent Standard Deviation if you’re curious).

Last night I joined the Hammercise Ride (part of Pedalpalooza) to spread the moves and the fun. After getting suited up in a one-piece neon spandex outfit and making myself a headband, me and about 35 others started with a stretching session in Waterfront Park. Then we got schooled in the basic Hammercise moves and rolled out to strut our stuff. 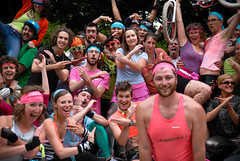 Our first stop was Pioneer Courthouse Square. We watched GiGi and Harry Fabulous do one of their astounding routines before doing a bit of Hammercising ourselves — much to the delight of tourists and others who passed by. Unfortunately the square was pretty empty, so we rode across the river to make our way to the MAX station at Holladay Park in the Lloyd District.

Before we got there, we made a pit stop at the gas station on the corner of Broadway and Williams where we gave commuters something to smile about as they headed north.

On the TriMet MAX platform in Holladay Park, we got a few new people involved, but we mostly just earned a bunch of curious looks and a lot of smiles. After that, we rolled down to Colonel Summers Park where GiGi and Harry performed some brand new material in front of a big crowd and the Street Team got one last chance to Hammercise.

Word on the street is that Gigi and Harry can barely keep up with all their bookings, so this will very likely not be the last time you’ll hear about Hammercise. In the meantime, check out their Facebook page. For more photos from the ride last night, check out my photo gallery or the slideshow below.

See more coverage of Pedalpalooza 2010 on our Special Coverage Page.

What struck me about it, as I happened by in Waterfront Park, was the color. It was wonderful to see so much of it in that vast colorless expanse.

thanks Anne. i thought I saw you pull up.

I agree. the color was fantastic… especially on a gloomy day.

I just saw on the news that Portland was voted the least manly city in the country.

Thats not news. That’s why every two-bit non-native male transplant gets picked up immediately.

So, which one was Maus? Or was he behind the camera in every shot? 😉 BTW that overhead lift with the arm and thigh is a killer on the lifter, I can tell you from my dancing days. It ain’t easy for the liftee either.

I love this ride so much I want to marry it. Please please roll it out again sometime soon!!!